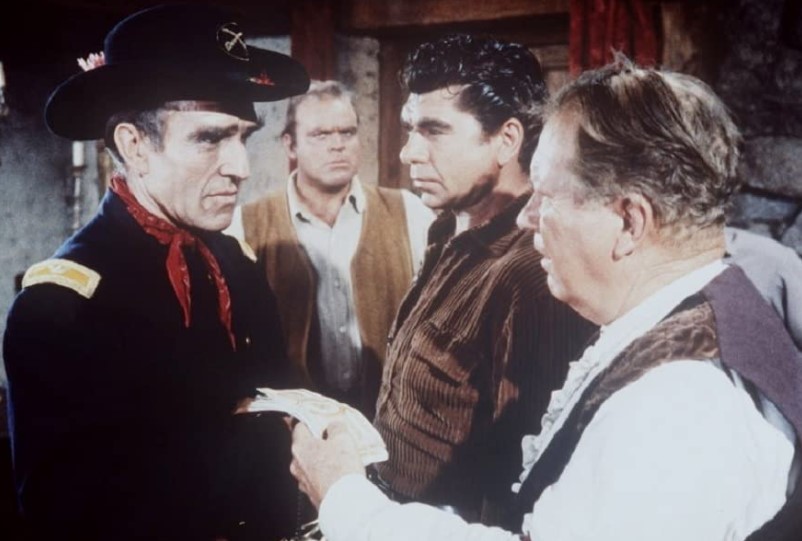 Claude Akins appears as the titular character, Sam Hill, a strong-willed blacksmith with extraordinary strength. When pressed to give up the land where his mother lies, Sam discovers that his irresponsible drunkard father and the property’s new owner, a self-styled dictator, sold him out.

Read Sam Hill’s plotline and behind-the-scenes trivia, or watch the full episode below.

Sam Hill, an extraordinarily strong blacksmith, returns to Virginia City to visit his mother’s grave. Colonel Tyson and his private army arrive shortly after, reminding Sam of his offer to sell his land. He also mentions the return of Sam’s father, John Henry Hill, to which he refers as the actual property owner.

Meanwhile, Hoss and Joe believe Sam Hill’s mystical, considering he was able to order a horse from the Ponderosa to do something for him.

The following day, Sam visits the town hotel to meet his father for the first time. However, he finds him at the town bar drunk. Sam carries him to their property.

John finds himself in Sam’s place, then complains about Sam’s loud pounding. He accuses Sam of kidnapping him but after seeing the property and his wife’s grave, he later realizes that Sam’s his son. Sam narrates what happened, then asks John why he didn’t return. John explained that they didn’t have any fortune. Sam asked John if he had returned to sell the land since it had been the talk in the city. However, John reasoned that it was Sam and Rachel’s (Sam’s mother) property and couldn’t find the heart to sell it. Sam informs him that he has no intention of selling the land. He later asked John again about what he should be calling him. John told him that people call him “John Henry,” “J.H.,” and even “seldom sober.” In the end, Sam chose to call him “Pa.”

Sam takes John to the Ponderosa to introduce him to the Cartwrights and bathe and feed him.

Meanwhile, Colonel Tyson visits the Territorial Land Office to record and file his ownership of the land the Hills owned.

Later that evening, the Cartwrights and Hills share a conversation over various topics. At one point, Hoss asks about the candlenut tree, the tropical tree on the Hills’ land that thrives despite the cold Nevada winters. Colonel Tyson suddenly arrives at the Ponderosa to tell John about the property he deeded to him. John couldn’t remember selling the land. Devastated, Sam insists on knowing the truth. He understood that John couldn’t remember anything every time he drank, so he only begged to know why John returned. Sam leaves to protect his property, while the Cartwrights visit Virginia City to help Sam reclaim his land.

Once they arrive at the Territorial Land Office, they find John’s signature on the deed. John realizes his mistake and expresses his devastation, not wanting to see his son. Ben encourages John to face Sam while he and Hoss visit the sheriff to see what else they can do.

Colonel Tyson finds Sam on his land. He orders his private army to get Sam off his property, but the latter can defeat Tyson’s men instantly. The earth suddenly shakes. Sam announces that as a mystical force that keeps the tropical tree alive all year round, keeps the snow off his mother’s grave, and will stop Tyson from taking over the place. A geyser erupts behind Sam and all over the place, causing Tyson’s horse to panic and throw him over. Sam approaches Tyson, asking him what he meant when he said, I didn’t want to kill her.” Tyson tells him that he never intended to kill anyone, thinking that having the house gone would force Sam’s mother to come to him. Sam believes her mother wouldn’t do that. However, Tyson tells him Sam’s mother will do it for Sam’s sake. Tyson pleads to Sam not to kill him since it was an accident. Sam lets go of Tyson, and the surrounding geysers start to calm down. The Cartwrights arrive in time, finally understanding that the steam must have kept the property warm even during the coldest winter in Nevada. Ben assures Sam that John didn’t know what he’d done, which Sam acknowledges.

Sam bids farewell to the Cartwrights, allowing his father to tag along. A man named Billy Joe, who has been following John since he was young, arrives, and Sam lets him join them too.

Behind the Scenes of Sam Hill

The Cartwrights join forces to assist the mighty blacksmith, Sam Hill, in reclaiming his land, which his drunkard father signed over to an old enemy. With the help of the Cartwrights, he uncovers the truth about his mother’s death. He also solves the mystery of why a tropical tree thrives despite cold Nevada winters.

This episode would be the last in which the Bonanza title card appeared. Starting with “The Smiler,” the producer-writer-director credits would be on display immediately after the card rather than at the end.

While checking a deed in the land office, Ben says, “We will prove this paper isn’t worth (pause) the paper it’s written on.” Lorne Greene appeared to realize the error, which explains the pause in his execution.

He most likely meant that the deed was not worth the paper it’s on.

Sam Hill was a series pilot that never got sold.

Claude Akins appeared in several other episodes, including “Bonanza,” “The Mill,” “The Deserter,” and “Desert Justice.”

While in the bath, Sam’s father tells Adam about what happened to him in St. Petersburg. At that instance, Adam corrects him about German officers wearing helmets with spikes. The stories for Bonanza’s early seasons existed around 1860, meaning there was no such country as Germany until 1871.

The horses of the Colonel’s army vanish after the Colonel draws his sword during the fight scene by the Candlewood tree. The army men disappear, and so do the turned-over coals.

The famous Western series, Bonanza, is a fantastic show anyone will enjoy binge-watching alone or with their beloved ones. NBC network produced the hit series, broadcasting all 14 seasons from September 1959 to January 1973. Sam Hill is the 66th episode out of 430 and the thirty-forth or last for its second season.