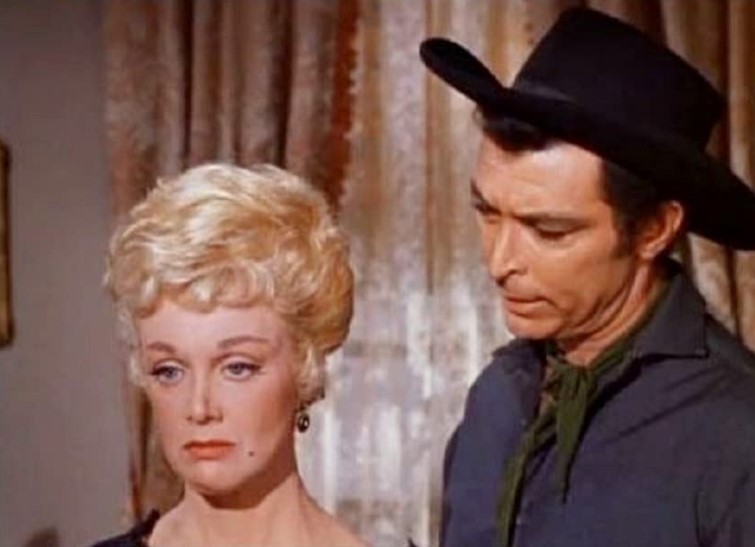 The legendary Western series Bonanza kept its viewers glued to the show through its action-packed episodes that dealt with the lead characters’ adventures and drama. William Raynor and Myles Wilder wrote the program’s forty-seventh episode, The Blood Line, which first aired on December 31, 1960.

The episode begins with Luke Grayson (played by former B-western star Allan Lane) going on a violent drunken rampage. The situation forces Ben Cartwright to shoot and kill him. Todd (David Macklin), Grayson’s son who has recently arrived from the East, swears to take revenge on Ben and the rest of the Cartwright family.

Read The Blood Line‘s plotline, which includes some interesting trivia, or watch the full episode below.

Watch the Full Episode of The Blood Line

Watch the Full Episode of The Blood Line:

The Blood Line, Bonanza’s fifteenth episode for its second season, stars a few of the show’s one-time guests, recurring and supporting cast in addition to the lead actors.

Ben and Hoss visit Virginia City to buy some supplies. Suddenly, a drunk Luke Grayson arrives, shivering, asking the storekeeper, Bert, for his favorite brand of wine. However, his wine of choice is out of stock. Still, Luke insists on getting himself some wine, forcing Ben to interfere. Luke gets a bottle of wine, causing many others to fall. Dianne Jordan, a saloon girl, stops him, but Luke grabs a gun, aiming then shooting it at the Cartwrights. The situation forces Ben to retaliate, killing Luke in the process.

Luke Grayson’s son, Todd Grayson, arrives from Boston, expecting his father to welcome his arrival. However, Todd learns that his father is dead. He rushes inside the funeral parlor as Ben and Hoss exit. Dianne Jordan arrived shortly, telling Todd that Ben Cartwright shot and killed his father in cold blood. Ab Jenkins tells Todd that Ben only fired in self-defense.

Todd points Luke’s gun at Ben as the funeral service ends in the cemetery. Ben feels sorry for the young man.

The sheriff puts Todd in jail until the judge arrives and decides what happens to him. Ben insists they free Todd in the meantime, but the sheriff believes it’s for the best, noting that nothing can stop Todd from exacting revenge. Just then, Dianne arrives to take care of Todd. She brings him his father’s gold watch, chain, and three silver dollars. Todd felt disappointed, expecting more from his father after the words he mentioned in the letters he received.

Ben asks Dianne if there’s something he can do to help Todd. However, Dianne brushes him off, thinking it’s Ben’s way to ease his guilt. Ben tells the sheriff that he’ll take Todd to the Ponderosa to straighten him out before he ends up like his father. Hoss doesn’t think it’s a good idea, but Ben insists. The sheriff reluctantly agrees to give Todd to Ben, only on parole.

Appling visits Dianne to talk about Todd and the Cartwrights. He volunteers to kill Ben Cartwright for a price. Dianne mentioned not having enough funds, but Appling thinks Todd inherited enough money to hire him. Appling leaves, giving Dianne time to think it over.

Hoss spends time with Todd at the Ponderosa to keep him busy. Ben even offers him to eat with them. However, Todd remains bad-tempered, not liking his stay at the Ponderosa.

Later that evening, Todd finds a gun in the Ponderosa house, pointing it at Ben. When Todd pulls the trigger, he discovers that the weapon has no bullet, much to his disappointment. Todd flees, and Ben doesn’t try to run after him. He plans to tell sheriff Roy about the situation in the morning.

Todd visits Bert’s store to buy a gun. However, Bert refuses to sell him a weapon for any cost, considering he’s Luke Grayson’s son. Todd was about to leave when he found an ax handle, striking Bert, causing him to fall unconscious. There, Todd steals a gun and a load of bullets, hiding them on his vest.

Dianne finds Todd hiding at the staircase of the saloon. Todd reveals that he tried to kill Ben, so Dianne offers to take him to his room before they catch him.

Meanwhile, Ben and Hoss visit the sheriff to report what happened. They encounter Bert, who tells them that Todd came into his store to buy a gun. However, as he turned around, Todd hit him with an ax handle. Bert also tells them Todd took a gun and some shells from his shelf. Sheriff Roy orders Ben to take Bert to the doctor while he and Hoss continue searching for Todd.

In Dianne’s room, Dianne tries to stop Todd from killing Ben. Although Dianne wants Ben dead like Todd, she doesn’t want Todd to pursue his plan. Seeing she can’t stop Todd, Dianne shows Todd a draft on the First City Bank of San Francisco, holding five hundred dollars. Just then, Appling enters the room. Dianne asks him to get Todd to San Francisco, and Appling agrees for five hundred dollars. However, Todd doesn’t want to accept it. Appling shoves him, then grabs the bank draft Dianne signed.

Appling goes to the saloon to ask the bartender for a cash exchange. Ben arrives and finds out about it, asking if it has something to do with Todd. However, Appling refuses to talk about it. Ben insists on talking to Dianne about the money, but as he turns, Appling calls his name and is ready to shoot Ben. However, Ben evaded and fired him back.

Todd and Dianne hear the gunshot, so he guides Todd to hide outside the window. Ben asks Dianne about the bank draft. Dianne tells Ben that it was Luke’s money. However, Ben knew that Luke never had that big of cash. He reminds Dianne that the town knew she supported Luke, but Luke failed to recognize what she did for him. Todd jumps from the window and aims the gun at Ben again. Dianne stops him, telling Todd that everything he heard from Ben was true. She tells him that Luke never sent him a dime, that Luke uses his money to get drunk, and all the funds Todd received came from her. Confused, Todd asks Dianne why she stayed with his father if he was that bad. Dianne reveals that he loved Luke despite all of that.

Ben gets the gun from Todd’s hand and leaves to give the two a moment. He meets sheriff Roy and Hoss and surrenders the weapon, stating it had no bullets. Ben also tells Roy that Todd didn’t steal the horse since they gave it to him.

Ben asks Roy to tell Todd to pay them a visit with his new mother, Dianne.

Full Script and Dialogue of The Blood Line

Behind the Scenes of The Blood Line

Among the Cartwright family, Pernell Roberts and Michael Landon do not appear in any part of this episode. In one scene, Ben mentioned that Adam and Little Joe were away on a roundup with some of the ranch hands.

Bonanza, which tells the adventures of the Cartwright family, is a fantastic show to watch alone or with your family and friends. All 14 seasons ran on the NBC network from September 1959 to January 1973. The Blood Line is the 47th episode out of 430 and the fifteenth for the second season.