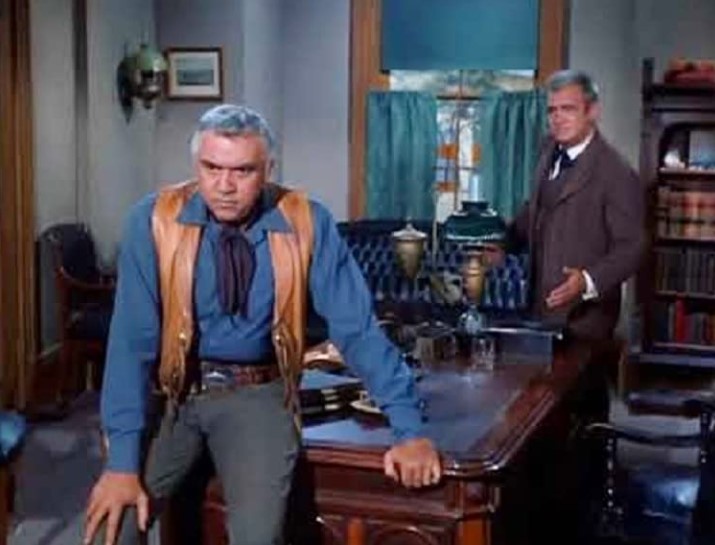 Scruffy prospectors Cunningham (Parley Baer) and Furnas (Walter Coy) arrive in town, claiming to have discovered a valuable silver lode at Thunderhead Mine. Ben Cartwright finds this suspicious, so he starts investigating. Later, Ben learns Jim Bronson (Judson Pratt), the mine’s former owner, has been killed. The situation made Ben wonder if the two prospectors were to blame or if there was another sinister figure behind the murder.

Read about The Thunderhead Swindle, including behind-the-scene facts, or watch the episode below.

Watch the Full Episode of The Thunderhead Swindle

Watch the Full Episode of The Thunderhead Swindle:

The cast members of The Thunderhead Swindle, Bonanza’s thirtieth episode for its second season, are as follows.

The Cartwrights find a group of miners sharing a steer. Understanding their desperation to feed their families, Ben allows them to continue what they are doing. He also warns them that he doesn’t tolerate any stealing, whether that involves rustlers or miners.

Ben, Hoss, and Little Joe visit Sheriff Roy to offer a few cattle to help the people of Virginia City get through the depression in the city.

Meanwhile, there’s a strike or deposit at the Thunderhead, a mine supposedly a dead hole. Ben finds this news suspicious, close to unbelievable, as the owner, Jim Bronson, the best mining man in Comstock, declared it dry.

Ben visits Jim to ask about the Thunderhead. Jim sold the mine, so he tells Ben it’s no longer his business. Moreover, the new owners, Frank Furnas and Jack Cunningham offered Jim to join them, but Ben argues there’s no strike in the mine. Jim tells him he’s only doing it for the miners. However, Ben believes it’s a bad idea, helping Jim change his mind.

Later that day, Jim tells Furnas and Cunningham that he won’t be joining them since there’s no silver in the Thunderhead. His answer disappoints both prospectors, leading them to hire Horton to murder Jim. They made it appear like the murder was a robbery.

The next day, Sheriff Roy delivers the sad news to the Cartwrights. Roy believes it’s a robbery, but Ben argues that the Thunderhead situation led to his death. Still, Roy refuses to unfold the truth about the Thunderhead strike just yet.

Ben finds that Jock McPherson of the Gould & Curry mining company thinks there’s also silver in the Thunderhead mine. Jock tells Ben that he demanded proof, advising Ben to come to the Thunderhead shaft the next day to see it too.

The following day, the prospectors brought out an ore cart from the mines. The proof they’ve laid out convinced Jock to recommend the mine to the San Francisco branch for investing. Meanwhile, Ben is still suspicious about the strike.

Ben and Leon enter the mines from an old air shaft that only a few people know. They did find rich silver ores in the mines, but Leon believes it’s someone else’s ores. Unfortunately, Furnas and Cunningham recognized them.

Ben and Leon return to Leon’s home, where they suspect the silver ore they found was from the adjacent mine, the Gould & Curry land. Confirming their suspicions would require hours. In the meantime, the two called it a day, planning to continue their venture tomorrow. However, Horton murdered Leon later that night.

Cunningham tells the people of Virginia City that Ben will gain the most if the city falls to its doom. His statement makes it seem like it was Ben’s reason for taking the Thunderhead strike down, causing the townspeople to ridicule the Cartwrights.

Ben consults Watkins, the resident engineer for the Virginia City area, to check the Thunderhead area. However, doing so would require Watkins to ask permission from Cunningham and Furnas. After further convincing and thinking about his friends, Jim and Leon, Watkins agrees to check the mines with the Cartwrights.

Watkins checks an area near where Ben and Leon found the silver deposit. It appears they’ve crossed the boundary line of the Gould & Curry area, confirming that Furnas and Cunningham were stealing from the adjacent mining area.

Furnas, Cunningham, and their men heard a noise, which prompted them to check the mine for any trespasser. A shooting ensues.

The Cartwrights and Watkins manage to escape, then tell Jock about the real bonanza in the Gould & Curry area. They find that the mineral deposit will bring prosperity back to Comstock, enough for the miners to live better once again.

Full Script and Dialogue of The Thunderhead Swindle

Set your leisure time to watch Bonanza alone or with your beloved ones. It’s a 14-season television series produced by NBC, aired on their network from September 1959 to January 1973. The Thunderhead Swindle is episode 62 out of 430 and the thirtieth for season two.