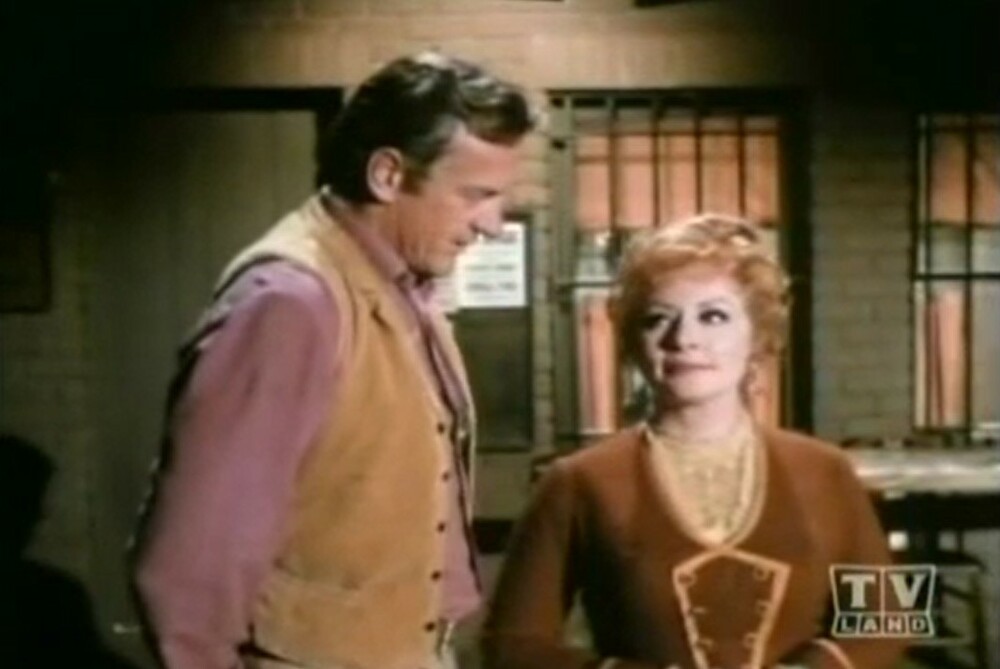 Gunsmoke is one of the most iconic Westerns in American pop culture. The show provided a unique perspective on the American West through its realistic portrayals of violence and its gritty setting. The central character, Marshal Matt Dillon, made the show extra compelling as he exerted effort to bring law and order to Dodge City despite his many challenges. Two episodes from Gunsmoke have the title, The Badge.

One of the two episodes of Gunsmoke with the title, The Badge, is directed by Vincent McEveety and written by Jim Byrnes. This episode was the 19th of season fifteen, aired on February 2, 1970. A gunfight in Dodge City caused Marshal Matt Dillon critical injuries. Pained because of what happened and what could happen if Dillon continues his dedication to the law, Kitty puts the Long Branch Saloon up for sale, bids Dillon farewell, and departs Dodge City. While in another town, Kitty soon realizes why Dillon is the kind of man he is and how being a lawful Marshal has helped a lot in running the city.

Meanwhile, if you’re looking for the episode from Season 6 where Marshal Matt Dillon got shot and kidnapped by two outlaws, you can find that here.

Check out The Badge‘s plot and trivia, or watch the full Gunsmoke episode below.

Watch the full episode of The Badge:

The following cast members acted in the Gunsmoke episode, The Badge:

Full Story Line for The Badge

Marshal Matt Dillon stops two men from getting away after robbing the freight office. However, a gunfight ensues, leading to his critical injuries, and Doc, Festus, Kitty, and the Dodge citizens find him unconscious after the gunshots ring.

With no assurance that Dillon would be safe from danger in the future, Kitty decided to sell the Long Branch Saloon and leave Dodge City. Doc tells Dillon about this, including how Kitty dies a little bit every time he has to watch Doc tend to Dillon’s injuries. However, Dillon believes he has no right to stop Kitty from leaving.

Newly, Festus and Doc waited at the saloon to bid their farewells to Kitty. Before Kitty rides her carriage, she pays Dillon one last visit to say goodbye. Dillon gets up from his bed and watches from the window as Kitty leaves town.

Kitty visits her friend, Claire, at a saloon in another town. That night, she heard Claire and Sheriff Dawson arguing downstairs. Kitty asks Claire who’s the “Papa” they were talking about from earlier. Claire tells her that Papa Steiffer is the law in their town, their so-called guardian, father confessor, and protector from evil. Although a few tried to stand up to him, all of those attempts went to nothing. Kitty tells Claire that she’d stand up to Papa, but Claire reminds her that it’s a different situation for her, especially since she can always return to Dodge anytime. However, Kitty insists on staying, even toasting to becoming Claire’s new business partner.

The following day, Doc, Festus, Newly, and Sam receive the news about Kitty buying the Ballard Nugget saloon. With an idea of Kitty’s whereabouts, Festus tells them he’ll ride up South and find out how Kitty’s doing. At that moment, Dillon enters the saloon to ask Festus to look over the town. Since he’s off to Ballard, Newly takes over the task.

Kitty meets Papa, who requests her to come over and discuss some matters. He welcomes her warmly, but Kitty immediately opens up about her saloon business in Dodge, including the total license fees she pays for it. Still, that didn’t make Papa back out of his plan.

Meanwhile, business is picking up at the Ballard Nugget saloon. However, Claire believes Papa won’t leave the Nugget alone. Kitty tells her that their next plan is calling together all business owners in town to stand up against Papa. At that moment, Dillon arrives at the saloon, claiming some business down South. Kitty introduces Dillon to Claire, who gives him a drink and the two a moment to talk.

Moments later, a player caught one of the card dealers, Jackson, at the saloon cheating. As per the law in town, Sheriff Dawson tells Jackson he has ten minutes to leave the county while the saloon has to be closed for a week. Dillon stops him, asking why he wasn’t arresting Jackson, given that he belongs in jail and the player has the right to prefer pressing charges. When the player leaves and chooses not to press charges, Dillon does it for him as a witness. Dillon also questions how wearing the sheriff’s badge gives Dawson the right to close the place without a hearing. Dawson no longer argues and tells Claire to keep the saloon open until the hearing. When Dillon tries to offer help, Kitty firmly shuts him off, telling him they can handle it themselves.

Meanwhile, Papa scolded Dawson for not knowing that a US marshal had arrived at the saloon. Papa believes Kitty has planned this all along and that the marshal will take over once Kitty organizes the town. With this circumstance, Papa thinks it’s time to do the unexpected.

Later that evening, Dillon heard a painful cry from a lady as he prepared to leave. When he tried to help her up, Papa’s men had him cornered, and Dillon immediately understood the setup.

Kitty confronts Papa about what he wants. Papa refuses to answer her unless Kitty calls her Papa. With no other choice, Kitty does as he wants.

With the lady he helped earlier, Papa apologizes to Dillon and sets him free. Dillon shuts Papa’s idea by saying he went down South to talk to some of the trail bosses coming in and that Kitty was only a part of the reason for his arrival.

Dillon confronts Kitty about her selling out to Papa when he had the chance to get a federal judge to override the town’s so-called law all along. Kitty asks him to leave Ballard, refusing to see him hurting again as a lawman. However, Dillon made her realize that he was doing what he was doing because he stood for the law, much like Kitty’s pride in what she stood for as a saloon owner.

Sheriff Dawson finally realizes that Claire is right about his father being all badge. Outside his office, Papa tells Dillon that he has continuously operated his life on pure reason because he only wants to make everyone around him happy. Papa takes off his hat to signal his men to shoot Dillon. However, Kitty immediately alerts Dillon about this and manages to evade the shot and retaliate. From inside, Dawson stops Locke from shooting Dillon and tells the marshal that he’ll have Papa locked up in an empty cell. Dillon agrees, then looks back at Kitty before he leaves.

Back in Dodge, Festus complains about somebody coming up to a deputy like him to find 17 chickens stolen. Dillon tells him to forget about it and call the day off, so Festus leaves as suggested. The door opens, and Dillon, expecting Festus, finds Kitty back in Dodge. Like good old friends, they agree to share a drink and happily return to the Long Branch saloon.

Full Script and Dialogue of The Badge

Behind the Scenes of The Badge

Viewers and a few networks often confuse The Gunsmoke episode, The Badge, with another episode in the series with the same name (The Badge, from Season 6).

During the gunfight near the end, Marshal Matt Dillon shoots one of Papa’s men up on a balcony. The man barely touched the railing when he fell forward, yet it fell apart for him to fall to the ground.

A bowl of popcorn with the Gunsmoke series is a perfect pair with family or friends! The American Western television series ran for 20 seasons, airing its episodes from 1955 to 1975. The Badge is the 19th episode from Season 19 of Gunsmoke.

You can find more about any of the Gunsmoke episodes here.