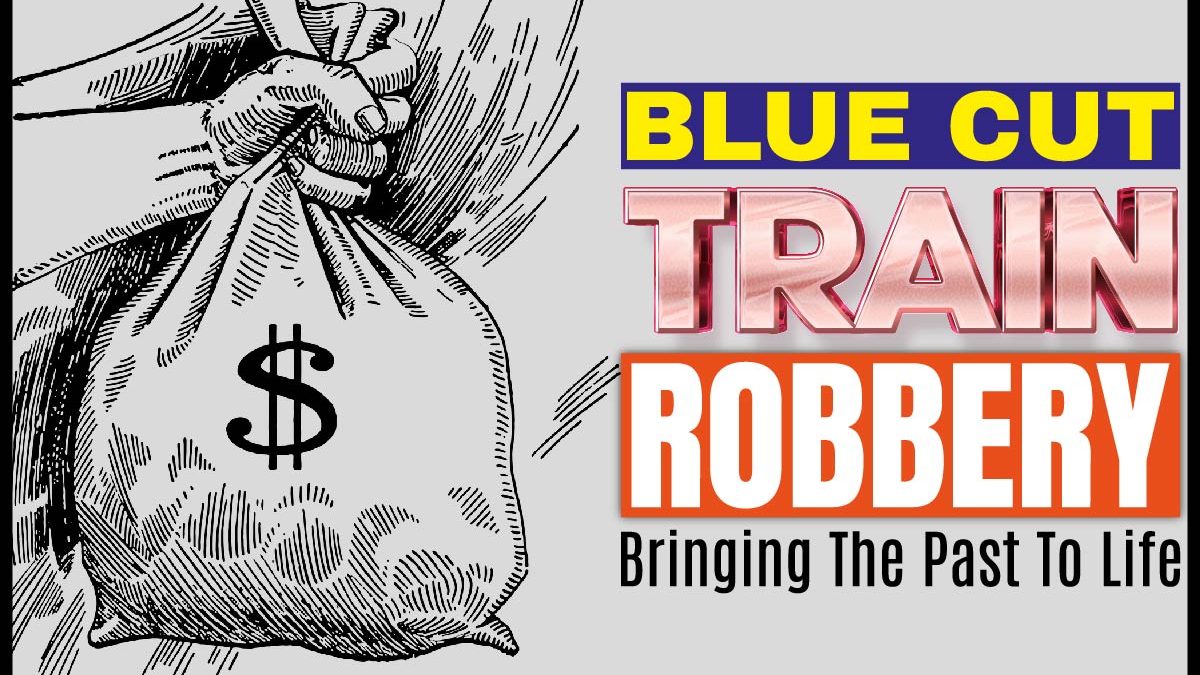 Blue Cut Train Robbery: Bringing The Past To Life

The Blue Cut Train Robbery was like any other train robbery in the Old West. It happened on the 7th of September 1881 in Missouri. Overall, the crime went smooth, as the robbers got away with less than $3000 (which wasn’t much, compared to other train robberies), with no lives lost.

Then, what was unique about the Blue Cut Train Robbery? The Blue Cut Robbery was famous because of the gang of robbers that carried out the crime and the events leading to the theft.

This post discusses the gang of robbers, the Blue Cut Train Robbery, and the events that led to the theft. Please read on.

The robbery happened close to Glendale, Missouri, in an area called the Blue Cut. The Blue Cut was a curve on the train tracks that caused trains to slow down to about 25 miles per hour. It was for thirty miles, and the construction company put it there for safety. However, the curve also became a perfect point to hijack and rob a train. The James Gang knew this, and that was their entry point.

The James Brothers (Jesse James, the leader, and Frank James, a gang member) chose the 7th of September for the robbery to happen. It was in honor of the gang members they lost in the famous Northfield Bank robbery.

The gang members present at the robbery that night were The James Brothers, Clarence Hite, Wood Hite, Dick Liddil, and their newest member, Charlie Ford. The six of them hit the train that night.

As the train approached the Cut, one of them stood on the tracks, waving a lamp as a signal for the train to stop. The train’s engineer immediately knew it was a robbery because the person waving the train to a halt had a mask on, and it wasn’t Halloween.

The engineer, Chappy Foote, brought the train to a stop. From then on, there were different versions of how the robbery went. One of the most popular versions has Jesse James walking up to Chappy Foote, introducing himself, and then ordering him to get them a hammer and a coal pick.

Chappy figured out that the items Jesse asked for were to open the train’s safe. He started to stall, to give the express messenger time to escape. However, the robbers weren’t fools. They quickly picked up on his scheme and threatened to put a bullet in his head if he didn’t speed things up.

The reports said Jesse told Chappy that the gun had killed others, and he wouldn’t hesitate to use it on him. Chappy loved his life because history records that moments later, he opened the express car.

However, the express messenger, Fox, got wind of the robbery, so he fled. They made Chappy call him at gunpoint, maintaining their earlier threat of putting a bullet in his head. Fox returned to the express car and opened up the safe.

The content of the safe wasn’t what the robbers expected. The money was small compared to what should have been there. Jesse then instructed his gang members to rob the passengers on the train. The robbers took cash, jewelry, or anything they considered valuable within a few minutes.

The story that went around was that Jesse James was the only one of the six robbers who wasn’t wearing a mask. According to the reports, he bragged to everyone on board, saying he was the infamous Jesse James.

After the robbery, Jesse allegedly gave Chappy two dollars, saying that he would destroy the Chicago and Alton Railroad. After this, they jumped out of the train and disappeared. This robbery was supposedly the last time the James brothers robbed together after many years of working together.

What Are The Events That Led Up To The Blue Cut Train Robbery?

The Blue Cut Train Robbery was only significant in history when we look at it from the events that led up to it. For example, the theft is on the list of things that marked the downfall of the James-Younger gang.

The James-Younger gang consisted of the two James brothers (Jesse and Frank), the Younger brothers (Cole, Bob, Jim, and John), and former confederates. Jesse was the person most people knew; he was in many ways the face of the gang. The gang didn’t precisely have a leader, as they mostly shared operational responsibilities.

They were responsible for several banks and train robberies, carrying out many crimes with an audience. They loved having a crowd, and they sometimes made a show out of their burglary. Law enforcement wanted them, especially the James Brothers, but that didn’t stop them from continuing their criminal acts.

The Northfield Robbery started at about 2 pm. They divided themselves into groups. Three of them went inside the bank for everything to go smoothly, and the remaining five were on the lookout outside.

According to reports, everything was going well until Joseph Heywood, acting cashier at the bank, resisted opening the safe by lying. Heywood claimed that the safe had a time lock, and he couldn’t do anything about it. Many would say Heywood was brave, while others thought he was stupid. Either way, he protected the safe even with a knife at his throat.

As the entire showdown between Heywood and the robbers happened, assistant cashier, Alonzo Bunker tried to escape through the bank’s back door, getting a shoulder injury in the process.

Gang members guarding outside started arousing suspicion from the people around the bank. Some citizens drew attention to what they thought might have been going on, and chaos followed.

The gang members outside opened fire into the air to discharge the people around the bank, but that didn’t end well. The townspeople took cover and started firing their guns at the robbers, which led to the death of two of them.

Inside the bank, the robbers tried to escape, and as they left, one of them shot Heywood straight in the head. Additionally, another person died alongside Heywood from the robber’s bullet. As they became the most wanted people at that time, they barely made it out of Northfield alive.

Jesse tried to form another gang, but it didn’t work out well, marking the end of him.

No. Jesse died a few months after the Blue Cut Train Robbery. The gang that robbed the train in the Blue Cut was the newly formed gang by Jesse. They stole from a few other trains and two stores, taking away large sums of money and valuable items.

However, the new gang didn’t stay together for a long time. Law enforcement was on their trail, and they didn’t have the qualities of the James-Younger gang. Frank and Jesse parted ways for their safety, deciding to give up their criminal ways. Frank moved to Virginia, while Jesse chose to stay in Missouri.

Jesse couldn’t trust anyone, not with the government after him and a $5000 bounty for his capture. He had to be careful. Yet, he considered the Ford brothers trustworthy, even inviting them to live with him for safety.

Unfortunately, the brothers he trusted betrayed him for the bounty and immunity. They shot him at the back of his head when he turned to clean a dusty picture on the wall. Robert Ford pulled the trigger.

Jesse died on the 3rd of April 1882, a few months after the Blue Cut Train Robbery.

His fame tripled after his death.

The Blue Cut Train Robbery would have been just another train robbery if Jesse James didn’t head it and if it wasn’t a memorial to the James-Younger gang.

The James Brothers, the Young Brothers, and the Ford Brothers were famous outlaws from the Old West. Furthermore, stories of their notoriety are now considered legendary.

If you are looking for great western books, check out these authors.

Previous Post
Is Any Of The Cast Of Bonanza Still Alive? Check This Out
Next Post
Western Song: Ballad of Paladin