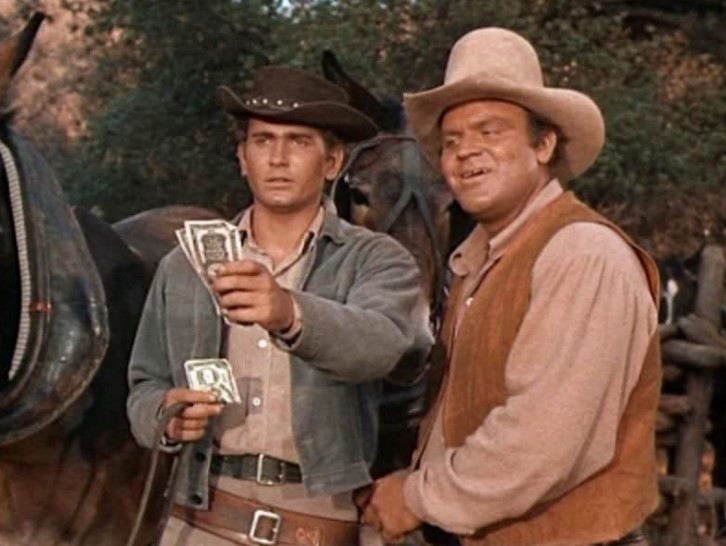 Ben Cartwright leaves Little Joe in charge of the Ponderosa as he and Adam go on a business trip. Later, he learns that Harrison (Ian Wolfe), the town banker, plans to incite bank panic to foreclose on a mining claim. Joe stages a bank robbery to foil Harrison’s plans, dragging an unwilling Hoss into his course of action.

Read on to see Bank Run‘s storyline and some behind-the-scenes facts, or watch the episode below.

Aside from Bonanza’s lead characters, the second season’s nineteenth episode, Bank Run, also featured some of the series’ recurring and guest cast. The cast members include the following:

The episode starts with John J. Harrison’s desire to foreclose on a mining claim to make quick money. Later, Harrison revealed his interest in taking over the Ponderosa after.

Meanwhile, Ben puts Little Joe in charge while he and Adam leave the Ponderosa for a business trip. Adam thinks it’s not a good idea, but Ben believes it’s an opportunity to show Joe what responsibility means. As soon as they leave, Joe becomes obsessed with the authority he has, ordering Hoss around and making unnecessary decisions.

When Little Joe visits the telegraph office in Virginia City, he discovers that the city’s banker, Harrison, is intentionally closing their bank’s branch in Virginia City. They speak to Tim O’Brien to make him transfer his money to a different bank. However, he’s too drunk to understand what’s happening. Little Joe and Hoss decide to head over to the bank to ask about the bank’s status. While Hoss is on the lookout, Little Joe delivers the news to the bank manager, Mr. Huggins, and his assistant, Mr. Finch. However, Little Joe’s attempt to foil Harrison’s plan led to Joe and Hoss “robbing” the bank to protect its innocent depositors.

Sheriff Roy, Huggins, and Finch find it hard to understand why Hoss and Joe would rob the bank. However, unbeknownst to the sheriff, Huggins and Finch think the Cartwrights robbing their bank would benefit them greatly.

Meanwhile, sheriff Roy plans to send a message to the peace officers of every town to inform them that the two Cartwrights as wanted men. However, Joe orders Hoss to chop down one of the poles, cutting the connection to the telegraph office.

When Ben and Adam return from their business trip, they find WANTED posters for Joe and Hoss all over town. Uninformed about Joe’s plan, Ben and Adam rush to sheriff Roy’s office to find out what happened. Ben insists on taking the boys and returning what they’ve stolen.

Joe cashed the drafts from the Virginia City branch to the Placerville branch, intending to return the funds to Virginia City. They rested for the night before returning to the city. However, Huggins and Finch found them, robbing their horses and the cash they “stole.”

Ben finds the townspeople at the bank, worried about their deposited money. He assures them they won’t lose a penny, even if paying back the robbed money would mean selling the Ponderosa. Once the people had left, Ben asked Johnson, the bank staff, for Huggins and Finch. Johnson revealed that the two went on a hunting trip. Ben finds it unbelievable, given the situation the bank has. He further asks about the stolen money, and Johnson reveals that the Cartwright boys stole a hundred thousand dollars in bonds.

Ben realized that his boys were telling the truth, so he visited the sheriff to report it. Adam backs him up by stating how odd it is for Huggins and Finch to go on a hunting trip after the robbery. Ben insists that Harrison plotted the situation but assures the sheriff that he’ll pay back every deposit even if he has to go broke.

Meanwhile, Joe and Hoss must work hard to recoup the stolen funds and regain their father’s favor. They return to the Ponderosa with their horses and the money from the bank. However, Ben finds out that they “borrowed” two mules, so he orders them to return and pay for renting them.

Ben returns to Virginia City with Adam to return the money. Harrison arrives at the bank, asking why it hasn’t closed, given his order. Johnson tells him that the bank has run out of money, enough reason to have it closed. Ben tells Harrison that if he tries to make another shady deal in Nevada Territory, he won’t hesitate to have him investigated and jailed.

Meanwhile, Joe and Hoss find themselves beaten up by the man who owned the mules they stole. They both learned that they’re better off as hired hands.

Behind the Scenes of Bank Run

The “Wanted” poster for Joe and Hoss states that Joe is 5’11” tall. However, according to IMDb, Michael Landon (Joe) stands 5′ 9′′ tall. The poster also says that Hoss is 6’3′′ tall, which is consistent with Dan Blocker’s page on IMDb.

The episode finally reveals that the town of Placerville (mentioned numerous times throughout the series) lies in California.

The start of the show tells the year 1863. There are only a few episodes earlier in the same season, showing the year 1861.

Make Bonanza your next show to binge-watch by yourself or with family! It’s a fantastic 14-season program run by NBC from September 1959 to January 1973. Bank Run is the 51st episode out of 430 and the nineteenth for its second season.