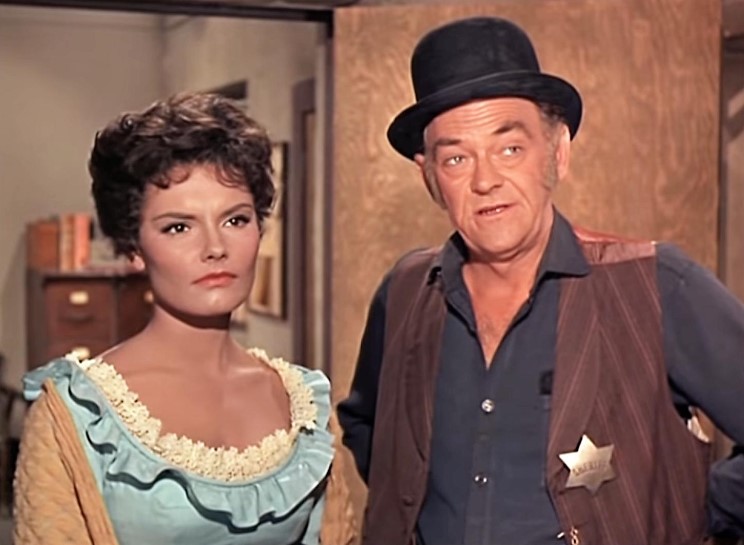 Bonanza, a Western television series, narrates the adventurous tales of the fictional Cartwright family as they live at the Ponderosa ranch and fight off the forces of crime and greed. Richard Newman wrote the program’s fiftieth episode, The Bride, which aired on January 21, 1961.

A woman named Jennifer (Suzanne Lloyd) appears at the Ponderosa, claiming to be Ben’s new wife and backed with a marriage license to support her claims. Upon Ben’s return, the Cartwrights quickly realized that a con artist posed as their father to deceive Jennifer. The brothers head to Crater Plains to confront the imposter, determined to recover Jennifer’s money and reputation. However, their endeavor led them to a setup.

Read The Bride‘s plot, which includes some interesting trivia, or watch the full episode below.

Watch the Full Episode of The Bride

Watch the Full Episode of The Bride:

The Bride, the eighteenth episode of Bonanza’s second season, featured some of the show’s recurring and guest stars in addition to the lead actors. The cast members for this episode are as follows:

Full Story Line for The Bride

A woman named Jennifer arrives at the Ponderosa, surprising the Cartwright boys as she claims to be their father’s new wife. Since Ben isn’t home yet, Adam finds it odd for him to send his alleged wife to the Ponderosa alone. Meanwhile, captivated by Jennifer’s beauty, Hoss and Joe didn’t mind the circumstance, believing their father could no doubt remarry.

Ben returns home that evening, surprised when his sons brought up him getting married. When Adam fetched Jennifer to show Ben, she was disappointed that the man in front of her wasn’t the person she married. Jennifer explains that he met the other “Ben Cartwright” in Crater Plain, who told him about his sons and the Ponderosa. She also revealed that she loaned the other “Ben” 4,000 dollars—the money left by her parents as a legacy—when he brought up buying cattle for the Ponderosa. The Cartwrights feel bad for Jennifer after realizing someone swindled her for money.

The Cartwrights and Jennifer ride over to Crater Plain, determined to confront the imposter and reclaim Jennifer’s money. When they arrive in town, Hoss and Ben visit sheriff Mike while Adam and Little Joe assist Jennifer to the hotel. As they were talking to the sheriff, news about an old miner’s death came, blaming Ben Cartwright after a letter appeared with the dead body. The sheriff arrests Ben for murder. Hoss tells Jennifer what happened as it seems the sheriff got Ben mixed up with the person who conned her.

Jennifer visits the sheriff to talk about Ben. However, to Ben’s surprise, Jennifer tells the sheriff they got the right man in jail. The sheriff initially refused to believe, but Jennifer showed him a marriage license to prove herself as Ben’s wife.

Frank, the con artist, visits Jennifer in her hotel room. It appears that they know each other, working together to trick people.

When the city clerk, Eb, arrives at sheriff Mike’s office, Mike asks him to verify the marriage license and if the man in jail was the person he wed. Eb confirms it’s the “Ben” on the marriage license, much to the Cartwright’s dismay. Ben asks Mike to visit Virginia City. However, Mike refused since it’ll be a long journey back and forth, and he had no idea about the town.

Adam confronts Jennifer about her lies. Frank aimed his gun at Adam and was about to fire when Jennifer blocked his way. Seeing he can’t stop Jennifer, Frank lets Adam leave. Jennifer thinks getting Ben to jail and his sons in town was enough, but Frank argues wanting to take over the Ponderosa.

Adam tells Hoss and Little Joe about what happened in Jennifer’s hotel room. However, the townspeople stopped them when they were about to leave the saloon after confirming they were the Cartwrights. Eb insists they leave town after the presumed “Ben” killed their friend, Ned Birch. When the townspeople refuse to let them go, Little Joe and Hoss point their guns, shoving people out of the way. However, sheriff Mike arrives, stopping them from moving further out. He takes their guns and locks them up with their father to keep them safe. Meanwhile, Adam managed to escape.

Jennifer dislikes the idea of the town getting involved with their situation, especially after knowing Frank killed the old miner. She insists they leave with the money, but Frank refuses. Adam jumps in from the window, and they engage in a fight, leading to Frank’s death. Jennifer reveals that their plan only involved her pretending to be Mrs. Ben Cartwright, as this was what Frank asked her to do.

Adam returns to the sheriff with Jennifer, who immediately confesses lying about being Mrs. Cartwright. As the mob approaches, Jennifer tells them that the Cartwrights are innocent and that she lied. However, sheriff Mike aims his gun at Adam, who manages to fire back at the sheriff. Adam asks sheriff Mike why he tried to kill her. Sheriff Mike reveals that he wanted the Ponderosa for himself, considering there’s not much he can gain with his salary.

The Cartwrights return to the Ponderosa, admiring the beauty of their place.

Full Script and Dialogue of The Bride

Behind the Scenes of The Bride

John McIntire (Sheriff Mike Latimer) makes his first out of two appearances in the series through this episode.

Adam West (Frank Milton) makes his only appearance in the series through this episode.

Suzanne Lloyd (Jennifer Lane) makes her only appearance in the series through this episode.

Hank Worden (Ned Birch – Old Miner) makes his second out of three appearances in the series through this episode.

This episode is the only episode Alvin Ganzer directed in the series.

William Mims (Ed Bailey) makes his second appearance out of four in the series through this episode.

Avid Western fans and casual series-watchers will love watching Bonanza alone or with their loved ones. All episodes of this show’s 14 seasons ran under NBC’s production from September 1959 to January 1973. The Bride is the fiftieth episode out of 430 and the eighteenth for its second season.