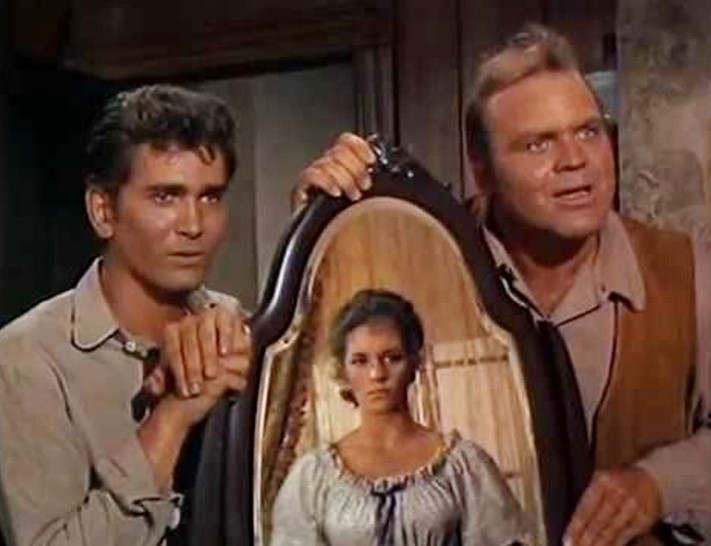 Bonanza, a 14-season Western television series, told the story of the Cartwrights, a fictional family led by the patriarch, Ben Cartwright. Ward Hawkins wrote the forty-ninth episode, The Spitfire, which aired on January 14, 1961.

Jeb Hoad’s wild and feisty daughter, Willow (Anita Sands), intends to exact revenge on Joe Cartwright after being forced to shoot and kill trespasser Jeb Hoad in self-defense. After appeasing the girl, Joe returns with her to the Ponderosa. Feeling responsible for her, Joe attempts to help Willow become a “proper” lady with the assistance of the ranch’s female staff.

Read The Spitfire‘s plot, including some behind-the-scenes trivia, or watch the full episode below.

Watch the Full Episode of The Spitfire

Watch the Full Episode of The Spitfire:

The Spitfire, the seventeenth episode of Bonanza’s second season, featured some of the show’s recurring and one-time guest cast in addition to the lead actors. See the list below for this episode’s cast members:

Full Story Line for The Spitfire

Jeb Hoad, a homesteader, starts a fire on the Ponderosa to clear himself a piece of land while his daughter, Willow, assists him by bringing dried tree limbs. When Little Joe tries to stop the fire, Jeb shoots him despite Joe’s warning. Jeb brings out a long rifle, ready to shoot Joe. However, the quicker Little Joe fires back in self-defense, killing Jeb.

Feeling responsible for the dead man’s daughter, Joe brings the feisty Willow back to the Ponderosa. Ben asks Hoss to have the body decently laid out while Adam report to the sheriff and gives Willow shoes, a dress, and some skirt to use.

Meanwhile, Willow’s mother, Maude Hoad, a determined woman traveling from the Kentucky hills, descends with her hulking son, Dodie, and a couple more relatives. They encounter Bart Hastings and his men, so they ask about Virginia City and her son, Jeb Hoad. Bart reveals that Jeb and his daughter camped on his ranch without permission and killed one of his steers for beef. Maude insists on camping on Bart’s land, but he refuses. One of Bart’s men draws his gun when Dodie shoots him dead. Maude whips Dodie for firing without notice. However, Maude refuses to take responsibility, stating it is an act of self-defense.

Little Joe comes back and forth in Willow’s room, bringing several buckets of water to get Willow cleaned. Hoss brings a contraption to help Mrs. Shaughnessy groom Willow. Inside the room, Shaughnessy soaks Willow as she sits on top of the wooden contraption. When they finish, Little Joe brushes Willow’s hair while Hoss puts on a shoe on her feet.

After a while, Willow’s cleaned and dolled up. They set up a mirror in the room, and Willow looks pleased with her look. Little Joe excitedly shows Ben how Willow looked. However, much to his surprise, Willow has fled with Ben’s horse.

The sheriff arrives to tell Ben about the Hoads, who intend to exact revenge on the Cartwrights. Upon hearing that the Hoads set camp at the Ponderosa, Ben and Hoss saddle their horses to face them.

Once the Cartwrights and the sheriff arrive at the Hoads’ camp, they see Maude with her whip and her men aiming their rifles at them. The sheriff asks for Dodie to stand trial for the death of Slim Carter, whom he shot at the Lazy K ranch. However, Maude insists once again that it was self-defense. The sheriff tells Maude that it’s up to the jury to decide. Maude argues that when Dodie’s wife died after some wild bunch shot her, the lawman only drove them off. Ben introduces himself. Maude tells him they want to kill the person responsible for Jeb’s death. Ben tells Maude that it was an act of self-defense, and the sheriff backs him up, insisting he takes Dodie. Seeing Maude wouldn’t surrender Dodie, Ben tells the sheriff they leave for the meantime to think about what to do next. Once they’re far enough, Ben tells the sheriff he’ll reason with Maude alone.

Ben tells Maude they should set aside grief and hate and try living as neighbors. He offers her private land, a head of beef, and ten horses. However, considering Ben’s generous offer, Maude thinks it’s a lie. Ben argues that it’s a trade to stop the killing between their families. Still, Dodie has to stand trial. Undecided, Maude tells Ben that her answer would be Dodie’s arrival at sundown the next day while ending their conversation with a warning.

As Willow flees out of the house, Little Joe rushes after to bid his farewell and tell Willow that she can keep everything they’ve given her. Joe understood that Willow heard her family was nearby, so he let her go. Moreover, Joe thinks it’s best to tell the Hoads about what truly happened, just as he promised Willow.

Little Joe visits the Hoads’ camp. However, Maude was busy talking to Willow. Dodie talks to Joe, but after seeing the rifles aimed at him, Joe refuses to talk. Dodie brings up shooting Adam, forcing Joe to tell him what happened between him and Jeb. At some point, Dodie is about to shoot his gun, so Joe retaliates, killing Dodie in the process. Maude threatens to kill Joe, thinking everything is just a trick.

When Joe leaves, Maude orders the other Hoads to go after Joe and Ben. However, they threw their guns, expressing their disgust for killing. They explained how Dodie attempted to murder Joe, so he only shot in self-defense. Maude whips them until Willow stops her, saying Jeb also tried to shoot Joe twice.

After burying her sons’ bodies, Maude and the rest of the Hoads set to face the Cartwrights.

Maude tells the Cartwrights that she believes what Willow, John, and Paul said about her sons, accepting Joe’s act of self-defense. She subtly asks to see the fixings Willow mentioned, earning an invitation from Ben to visit their place anytime.

Full Script and Dialogue of The Spitfire

Behind the Scenes of The Spitfire

The episode’s title in German is “Der Widerspenstigen Zähmung,” which translates as “The Taming Of The Shrew.”

This episode appears to be the first out of two, directed by William D. Faralla, also known as William Dario Faralla.

Jack Elam (Dodie Hoad) makes his first out of three appearances in the series through this episode.

Katherine Warren (Maud Hoad) makes her only appearance in the series, credited as Katharine Warren, through this episode.

Anita Sands (Willow Hoad) makes her only appearance in the series through this episode.

The “Kentucky Rifles” used by the Hoads are US Army M1873 Trapdoor Springfield breech-loading rifles. Although altered to look like muzzle-loading frontier rifles, the weapons retain the breech-loading mechanisms.

Add Bonanza to your list of must-watched series to enjoy alone or with your loved ones! NBC network televised the 14-season program on the channel from September 1959 to January 1973, keeping avid viewers hooked to its storyline through the years. The Spitfire is the 49th episode out of 430 and the seventeenth for Bonanza’s second season.