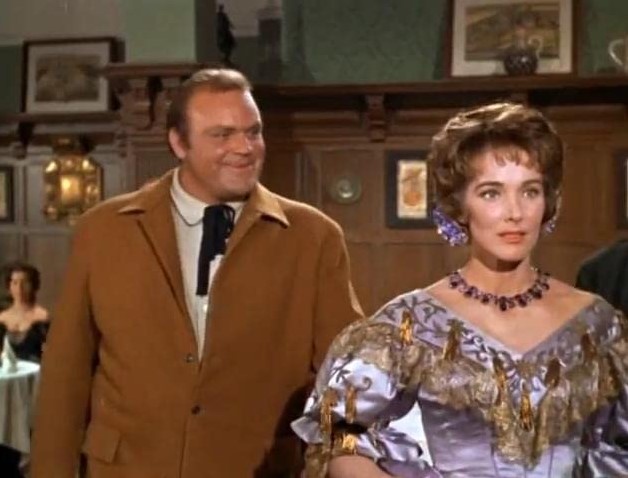 Bonanza conveys the adventures of the Cartwright family, with each episode’s storyline dealing with the problems faced by the lead characters or the surrounding town. The forty-eighth episode of Bonanza, The Courtship, was written by Richard N. Morgan and first aired on January 7, 1961. Among its featured guest stars are Marshall Reed and Lyle Talbot.

Julie Adams appears in the episode as Helen, Ben Cartwright’s old friend Josh Layton’s widow. Despite her lovely appearance and charming personality, Helen has a fatal flaw. She likes to gamble a lot, often dragging her lovers into her bottomless pit of debt, leading to despair. Helen has now caught Hoss’s attention, much to Ben’s chagrin.

Read The Courtship‘s plot, including some interesting trivia, or watch the full episode below.

Watch the Full Episode of The Courtship

Watch the Full Episode of The Courtship:

The Courtship, the sixteenth episode of Bonanza’s second season, featured some of the series’ recurring and one-time supporting cast members. See the list below for the actors that appeared in this episode.

Full Story Line for The Courtship

Hoss and Little Joe go to Sacramento to visit the widow of the Cartwright family friend, John Layton. Hoss finds the lovely widow, Helen Layton, and immediately falls in love with her. He invites Helen to supper, and she dolls herself up.

Helen and Hoss visit a local restaurant in Sacramento, where the waiter offers Helen a seat at her favorite table in the game room. However, when Helen finds a familiar face, she immediately asks for a more private table. Hoss thinks he doesn’t fit the place but brushes the thought as he enjoys his time with Helen. Suddenly, a man named Hammond approaches their table, intending to take a ring from Helen. Hoss and Hammond engage in a brief fight until the restaurant staff takes Hammond out. Helen explains that Hammond, his husband’s friend, thinks the ring Josh left her belongs to him. They continue their supper as Helen expresses her gratitude toward Hoss for standing up for her.

Hoss introduces Helen to Little Joe, who immediately falls for her beauty. Despite the long trip to Ponderosa, the three embarked on their journey. As they take a break on a lake, Hoss reveals that the land they’ve in was already the Ponderosa. Helen asks Hoss why he hasn’t kissed her yet, and they share one immediately after. Excited, Hoss calls Joe to tell him he’s marrying Helen.

Ben thinks the idea of marriage is sudden, so Helen asks to speak with him in private. Helen tells Ben that her husband was a drunkard who drank himself to death. She also expressed her love for Hoss, who made her feel like a woman again. Ben tells her that all he wants for Hoss is his happiness, and the two share a hug, implying his acceptance of having Helen as his daughter-in-law.

Hoss and Helen visit the saloon after shopping, where Helen finds several men gambling. She tries one of the gambling contraptions, unexpectedly winning on her first try. When Hoss leaves to grab some lemonade, Helen spends all the money she previously won to play again. Once Helen had no cash, Helen asked Hoss to give her a few more. However, she loses again. Helen keeps looking at the poker table, then asks Hoss if there’s anything else he could do alone while she finishes shopping. Before they separate, Helen, asks for money again, which Hoss immediately gives with no reservations.

Helen starts gambling at the saloon. She starts to lose money, but her opponent doesn’t bother, thinking Helen could just put it under the credit of the Cartwrights.

Adam returns from San Francisco and finds Little Joe decorating their place. To Adam’s surprise, Ben reveals that Hoss is getting married to Helen. Adam tells Ben that Helen never loved anything in her life other than gambling every penny she and her lover had. This gambling addiction marked the start of John Layton’s drinking. Upon discovering that Helen is in love with Hoss’ money, Ben decides to tell Hoss so that they can stop their marriage.

Hoss refuses to believe that Helen is a compulsive gambler, including how she started running with another man who can give her money to fund her gambling addiction.

When Hoss talks to Helen, he finds her wearing the wedding gown she bought. Helen tells Hoss that it has been a long time since she had been that happy since Josh died, and his closest friends spread horrible lies about her. Hoss assured her that he didn’t care whether what he heard was true or not.

Little Joe returns home with Frank, who proved Helen’s gambling addiction through the 5000 dollars she lost in the poker game at the saloon.

Adam and Joe visit Virginia City to stage a poker game for Helen. Helen starts losing in the poker game. Adam watches from behind, writing with forged promissory notes. Soon enough, Helen is deeply in debt. Joe leads Hoss into the saloon where the poker game takes place. Hoss can no longer deny Helen’s gambling addiction after witnessing it firsthand. However, Hoss vents his rage on his brothers, even though they did it for his benefit. Instead of apologizing to Hoss, Helen speaks with another man, asking him to take her out of the saloon.

The rest of the Cartwrights feel bad for what happened, but Hoss assures them that he is fine by asking them to work with him.

Full Script and Dialogue of The Courtship

Behind the Scenes of The Courtship

The title of this episode in German is “Leichtes Spiel mit Hoss,” which means “Easy Play With Hoss.”

If you’re looking for a television show to binge-watch alone or with loved ones, it’s time to consider Bonanza as your next pick! NBC network televised all 14 seasons from September 1959 to January 1973. The 48th of 430 episodes is The Courtship, which also comes as the sixteenth for the program’s second season.