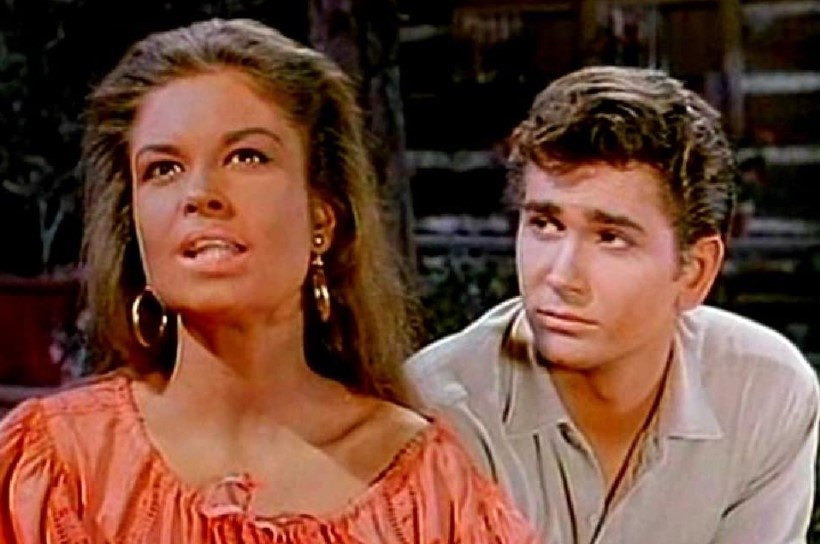 Millions of viewers and avid Western fans followed the adventures of the Cartwright family in Bonanza. Anthony Lawrance wrote Bonanza’s thirty-first episode of its first season, Dark Star, which aired on April 23, 1960. Hugo Haas, a cult movie director, plays Zurka, the chief, alongside Arthur Batanides as Spiro and Lily Valenty as Bruja.

Gypsy girl Tirza (Susan Harrison) has been sentenced to death by her tribe, who thought she was a witch. Tirza seeks refuge on the Ponderosa and falls in love with Joe Cartwright, who is determined to disprove the claims people have of her.

Watch the full episode, or read the storyline and other exciting trivia below.

Dark Star, the thirty-first episode of Bonanza, features a few of the show’s recurring and supporting cast members. The following actors are in this episode:

Little Joe and Hoss split up to search for a timber wolf they heard howling from a distance. Just then, Joe finds a track he followed, revealing a lady lying on the ground. He tries to approach the woman, but she gets up and runs from him, then stumbles down a hill where she falls unconscious. Hoss rejoins Joe, and they take the lady, who seems to be a Gypsy, back to their ranch house.

The doctor advises the Cartwrights to leave the lady the lady to sleep before sending her to her home. Since the Cartwrights don’t know where her people are, the doctor suggests turning her over to the sheriff in Virginia City. Joe objects, saying the lady didn’t do anything wrong, but the doctor believes she will since she’s a Gypsy.

Joe goes to the room where the Gypsy rests, but she tells him to leave. She removes the blanket, but Joe brings it back since it’s cold for her. However, instead of being thankful, she bites his hand, forcing him to leave the room.

Later that night, Joe hears the front door open and sees the Gypsy standing outside. He joins her. However, she won’t even turn to look at him, as she has her focus on the night sky. Joe asks about her family, but she declares she has no one. The Gypsy asks if Joe cares about her because she is pretty, to which Joe responds that he feels responsible for her since he brought her to the ranch. The lady also says he’s pretending to be a grown-up man, then describes herself as withered and dead. Her words made Joe declares her the craziest girl he has met, but the Gypsy tells him to go away before she turns him into a toad.

The next day, Ben finds the Gypsy feasting on the crumbs on the dining-room table. He offers her to have a decent breakfast, but she merely comments that he is a rich man. He acknowledges that he’s thankful for many things and then asks about her people, wishing to return her to them. However, she says they did not lose her because she is different from them. She hopes to be free.

At that moment, the Gypsy pulls the tablecloth from the table, breaking the items above it, then bolts out the door while shrieking. Her erratic behavior spooks Hoss and Joe’s horses. She stumbles, and Joe follows her. The lady grabbed his gun to try to shoot herself, but Joe stopped her, pinning her down while asking why she wanted to kill herself. She responds by saying she’s a witch, then alludes to “the dark star.”

Later, a group of gypsies arrives at the Ponderosa. Hoss thinks they are setting camp at the ranch, but Ben believes they came to pick up the lady. Ben tries to take her to the gypsies, but she refuses to go, leaving Ben and Hoss to see the gypsies themselves.

Zurka wishes to set their camp on the Ponderosa until the poor weather clears. Ben assumes they also came to pick up the girl, but Zurka avoids the subject, claiming she’s no longer one of them as she brings misfortune. He then accuses him of leaving her to die, but Zurka clarifies that they just left her behind. Ben makes an offer: they can stay on the Ponderosa if they take the Gypsy lady. Seeing they can’t do anything else, Zurka agrees and then diverts the topic to something else. He uses the chance to sell Ben some horses, but Ben, who has a keen eye on horses, notices that the horses are old and sickly, fixed up to look younger. This remark angers one Gypsy, later introduced as Spiro. However, Zurka changes the topic again by inviting them to dinner to celebrate All Hallow’s Eve. Ben tries to refuse, but Zorka firmly insists, informing Ben to bring a pig for the feast. Ben refuses, reminding them to leave when the weather clears and take the lady with them.

Joe finds the lady by a stream of water, digging at the ground with her hands. There, she finally revealed her name as Tirza. Although appearing friendlier toward Joe, Tirza begins talking oddly once again, which reminds Joe about “the dark star” Tirza mentioned earlier, including her attempt to kill herself. After some more speech about wishing to be a fish (which appears to be her cryptic method of revealing her desire to be accepted by her people for who she is), Tirza merely responds by saying she’s a witch.

Assuming he’s among Tirza’s people, Joe welcomes Spiro when he arrives on a horse. However, Spiro sternly tells him to run his kingdom and leave them alone. Spiro apologizes to Tirza, saying that he would have made sure she wasn’t left behind if he had known. She rejects him, stating he would have only done so if she agreed to be with him and would rather lie with a snake. Unfazed, Spiro forcibly attempts to kiss her, and at some point, Tirza scratches his face to stop him. Joe intervenes to rescue her. After a short brawl, Spiro pulls a knife while Joe draws his gun, leaving Spiro to drop his weapon. Before leaving, Spiro warns Joe, saying his face will be the last one he’ll see in this world.

Hoss arrives by dinner, reporting a missing pig. Ben plans to have Zurka pay for the pig since he knows Zurka intended for him to provide one in some manner. Hoss and Joe believe watching Ben work out with Zurka will be fun, so they tag along, while Adam decides to stay home to guard the house in case the gypsies arrive in a wagon and leave with all their furniture.

Initially denying that he took the pig, Zurka later confesses and offers to pay for the animal with a bowl made from pure silver. Ben declines his trade but ultimately accepts the offer to stay and eat with the gypsies. While eating, Ben brings up the topic of Tirza and why they think she is a witch. Zurka reveals she was born under a dark star and can turn herself into a wolf.

Tirza unexpectedly arrives and starts dancing to the tune played by the gypsies, captivating Joe and Spiro. However, lightning suddenly flashes, and the gypsies are afraid, believing Tirza’s behind it. Tirza runs off with Joe, and Spiro discretely follows them with a rifle. Zurka tells Ben to go after Joe, but Ben trusts that Joe can take care of himself.

Little Joe accompanies Tirza by a big rock, praising how she runs faster than a deer. He asked why she came to camp to dance that way, to which she explained that she likes to see the fear on their faces. Tirza tells him they live in different worlds, but Joe assures her she’s not the witch they believe her to be. She responds, calling Joe a tree with roots dug deep into the ground and saying she wants to be a tree to protect little children from harm. Tirza later asks Joe if she thinks she’s beautiful, to which he answers with a kiss. Spiro watches as the two, ready to shoot with his rifle, but leaves when a wolf howls from the area.

That night, Tirza wakes up to find an open window, chicken feathers all over the place, and bloody wolf paw prints on her bed. Horrified of the threat she brings, she rushes to Zurka and pleads for his help. He informs her it will be painful and unbearable, but Tirza doesn’t care, fueled by the determination to be like others, even if it means her death.

When Tirza hurried outside, she forgot to close the door, so the noise it made upon banging open and shut woke Joe. He checks the door, discovering the chicken feathers and blood in Tirza’s room. He goes to the gypsy camp and sees Spiro, who informs him that Tirza turned herself into a wolf and slaughtered chickens. He also tells Joe that the gypsies will perform a ceremony, like an exorcism, to help her eliminate the evil. Joe begins to walk away, but Spiro stops him with a whip. When Joe tries to reach for his gun, Spiro whips it out of his grasp, causing them to fight. When Joe gains the upper hand, Spiro pulls his knife and tries to stab him, only ending up stabbing himself and dying shortly after.

Joe arrives at the ceremonial ground, but two gypsies stop him as they perform the rite, forcing him to watch as the events unfold. When the ceremony reaches its climax, Tirza becomes calm, so they release Joe. Tirza declares that she is now free, and Joe takes her back to the Ponderosa.

At breakfast, Joe subtly tells Ben he wants to marry Tirza. Ben agrees, pleased with Joe’s decision, but Zurka shows up and states the weather has cleared, so he has come to pick up the girl, whom his people now accept as their own. Joe tells him that Tirza will stay with him, but Tirza, awakened from her sleep, has chosen to go with the gypsies. She reminds him that she’s like the fish in the stream, who can finally swim with her people after waiting so long to see love in their eyes rather than fear and hate. Little Joe begs her to stay, but Tirza tells him their difference: Joe’s a tree that needs to stay to protect his home while she’s a fish. Tirza leaves, promising to remember Little Joe always and asking him to remember her when the stars are in the skies. Zurka apologizes to Ben about Spiro, stating that he should have recognized the devil in him earlier instead of Tirza. They had discovered the wolf’s paw on Spiro’s body, still wet with blood, implying that he killed the chickens.

Ben comforts Little Joe while watching Tirza leave the ranch with the gypsies.

Behind the Scenes of Dark Star

Little Joe gets bitten on his right hand by the girl. When Ben asks him what happened, he holds up his left hand, rubbing it after leaving the room.

Tirza reveals that she is 19 during the “exorcism” scene. When this episode first aired, in reality, Susan Harrison was 21.

This episode makes Susan Harrison’s only appearance in the series.

Arthur Batanides made only two appearances in the series, both as Pablo in Bonanza: The Fugitive (1961).

Bonanza is a must-watch Western show to watch by yourself or with family. It ran under NBC’s production from September 1959 to January 1973. The series lasted 14 seasons, with Dark Star being the 31st episode out of 430.