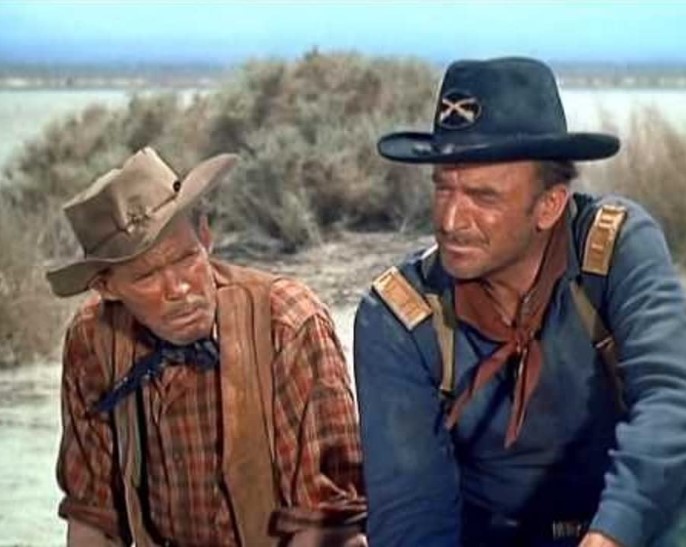 Bonanza, the 14-season long Western television series, depicted the weekly adventures of the fictional Cartwright family as they run and defend the Ponderosa ranch and the town from forces of crime and greed. Robert E. Thompson wrote season two’s second episode, The Mission, which aired on September 17, 1960.

Former army scout Charlie Trent (Henry Hull), who feels guilty for the massacre of a group of soldiers, has turned into a town drunk. One day, cavalry captain Pender (John Dehner) sends the town a notification, looking for a reliable scout to go on a dangerous mission. Determined to restore the pitiful derelict to his former condition, Hoss Cartwright recommends Charlie to the captain.

Read the story and some behind-the-scenes trivia, or watch the complete episode below.

Watch the Full Episode of The Mission

Watch the Full Episode of The Mission:

The Mission, the second episode of Bonanza’s second season, featured some of the show’s recurring and special guest stars in addition to the main cast. The actors in the episode are:

Full Story Line for The Mission

Charlie Trent, the town drunk, is in the saloon, having fun sharing his stories as an army scout. Most of the men in the bar enjoy his narrations, except for one who starts making fun of him. The teasing ends with the man pointing his knife at Charlie until Hoss arrives to help Charlie leave the saloon, hating to see his friend treated that way. Hoss returns the badge Charlie dropped, which acknowledges Charlie’s services above and beyond the line of duty.

Seeing he can’t do anything else to help Charlie, Hoss gets money to tidy up Charlie and send him to San Francisco. Charlie insists on staying since he feels he belongs in Virginia City, but that doesn’t stop Hoss from pursuing his plan for his friend.

Captain Pender, commanding an army wagon train carrying gold, makes a supply stop in Virginia City. Pender is on the verge of firing Cutter, their scout after Cutter chooses to see his friends despite the strict schedule they have to follow. Charlie saw what happened and offered to become their new scout. Pender initially hesitated but remembered Charlie as a scout when he showed his Fremont Exploration badge. However, it wasn’t enough for him to hire Charlie.

Hoss finds the devastated Charlie at the saloon. The captain arrives shortly after, firmly ordering Cutter to perform his duty immediately. He threatens to fire him, then declares to hire Charlie Trent, who knows the wasteland more than anybody else. Cutter finds it amusing since Charlie led the army into an ambush, almost killing everyone. Pender fires Cutter and, desperate for a guide, offers the task to him, including everything he needs. However, he runs away before making a decision. Seeing this can be Charlie’s chance, Hoss talks to the captain, asking him to let Charlie ride with him again. The captain, seeing he has no choice, agrees, so Hoss delivers the news to Charlie.

Hoss finds Charlie sitting pitifully outside. He encourages Charlie to scout the trail for the captain and his troop, warning that he’ll become a coward, even a murderer, if he does otherwise. Charlie complies but asks Hoss to accompany him.

Cutter led a small gang who intended to steal the gold once they arrived in the desert. Cutter thinks it’s better to let Charlie guide the wagon train, allowing them to continue their plan. He believes people will assume that Charlie led the soldiers to their death in the desert, not knowing they stole the gold.

The troops set camp near a small body of water. Hoss finds Charlie searching for something in his pack, then figures he’s looking for his liquor bottle. Hoss informs Charlie that he disposed of it, much to Charlie’s disappointment since he believes it’s the only thing that can help him continue. He motivates Charlie, implying no one understands the desert much better than Charlie. Meanwhile, Cutter and his gang are watching them from behind.

When the troops arrive, Charlie informs them that the water contains poison after seeing a dead hare nearby. It was disappointing for everyone, but there was nothing they could do. The captain decided they’d cut rations and set camp before going to the next water hole.

Cutter and his gang arrive ahead of the troops on the next water. After getting what they need, he sets out to pour the poison. His men grew out of patience, suggesting they kill the soldiers instead of walking through the desert. However, they’re left to follow Cutter since he’s the only one who knows the way out.

Charlie and the army troops arrive at the next watering hole. However, Charlie tells them there’s also poison in the water. Unconvinced, one of the soldiers dives in. He suddenly winced from stomachache, then died a few minutes later.

They now figure somebody is riding ahead, poisoning the water holes. Charlie knew it had to be a scout, and the captain understood it must be Cutter. Although Cutter and his gang are already by the next body of water, Charlie believes they won’t poison it since those men will want the water for themselves. He then insists on scouting by himself at night. If he discovers that Cutter and his men are no longer by the watering hole and the water is clean, he’ll fire three shots, pause, then fire two more. That signal will inform them that it’s safe to go. Charlie tells them to head north to the Highlands if they don’t hear any. Hoss insists on accompanying Charlie, so they set forth.

Meanwhile, Cutter’s men are eager to steal the gold as they wait behind some rocks. When Hoss and Charlie arrive at the watering hole, Charlie finds the water free of poison, so the two dive in to enjoy it. However, their joy was short-lived when Cutter held them as hostages. Cutter asks about the soldiers and what signal will bring them back. Hoss refuses to answer, but Charlie chooses to talk after Cutter waves and pours a bottle of whiskey at him. He tells Cutter about the three-shot signal, so Cutter fires three times. After hearing the three shots, the troops figured there was danger up ahead, so they turned north out of the desert.

Charlie’s enjoying his liquor, pleased with himself for fooling Cutter, knowing the army will not arrive. He saved the soldiers and the gold. However, Hoss grows worried about what will happen to them once Cutter realizes the wagon train will not come.

Suddenly, the wagon train arrives. Cutter only sees three soldiers and presumes the other two are approaching from behind. He orders one man to watch Hoss and Charlie while the others go to separate places. Hoss and Charlie successfully overpower their guard.

A shooting commences against Cutter’s gang and the army troops. Captain Pender arrives with minor casualties. The army wagon train can make it out of the desert with clean water, and Charlie has successfully redeemed himself.

Full Script and Dialogue of The Mission

Behind the Scenes of The Mission

Charlie Trent, a man who used to be a top Army scout for explorer John C. Fremont, is the name of the character played by Henry Hull. The actor married Juliet Van Wyck Fremont, the famous historical figure John C. Fremont’s granddaughter.

The legendary Western show Bonanza is a terrific show to watch alone or with family. Each hour-long episode of the series ran under NBC’s production from September 1959 to January 1973. There are 14 seasons and over 400 episodes, with The Mission as the 34th or the second for its second season.