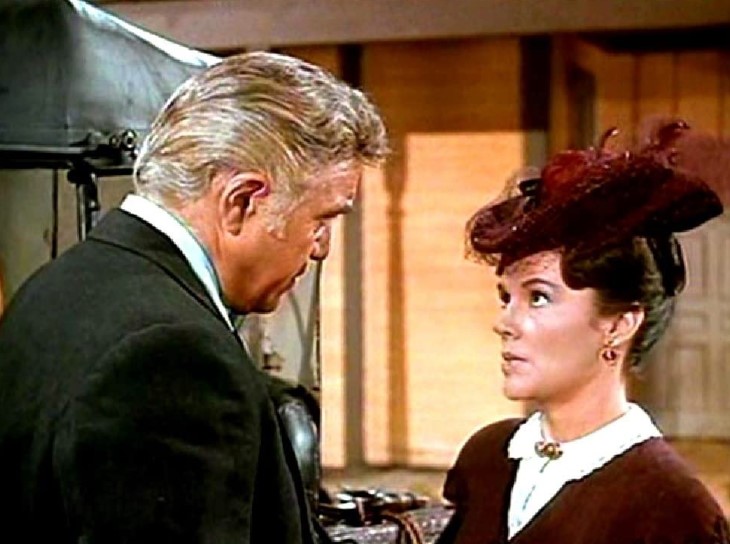 Bonanza follows the weekly adventures of the Cartwright family, led by the patriarch, Ben Cartwright (Lorne Greene). The 14-seasons program also shows how the main characters cared for their neighbors and the surrounding community. The Mill, Bonanza’s thirty-sixth episode, written by Halsted Wells, premiered on October 1, 1960.

Tom Edwards (Harry Townes), a disabled farmer, holds Ben Cartwright accountable for the accident that cost him his legs. Tom’s hired hand, Ezekiel (Claude Akins), further fueled Tom’s resentment while supplying Tom with liquor, defrauding him of his life savings. The episode reveals Ezekiel’s other reason for his Iago-like treachery: his detestation of the Cartwrights. This dislike increases his determination to use Tom as his weapon of vengeance.

Apart from the actors portraying Tom and Ezekiel, Joyce, Tom’s wife, is played by the special co-star, Dianne Foster.

Read the plot and some behind-the-scene details, or watch the full episode below.

Watch the Full Episode of The Mill

Watch the Full Episode of The Mill:

The Mill, the fourth episode of Bonanza’s second season, featured some of the program’s recurring and supporting cast members. The cast of the episode includes the following:

Full Story Line for The Mill

Ben’s old friend Joyce Edwards visits the Cartwrights at the Ponderosa ranch. Joyce is hesitant when Ben invites her for dinner but later agrees to stay for a little way. When they are about to enter the house, Ezekiel, Tom Edwards’ hired hand, arrives at the ranch after following his boss’ wife. He warns Joyce to return since her husband wouldn’t like it, but Joyce insists on staying regardless, leaving Ezekiel to wait for her.

Ben asks for Tom, and Joy implies that although her husband is doing well, he’s still bitter since the accident. Tom would follow her around with his wheelchair and call her names even in front of Ezekiel. Joyce tells Ben that her husband drinks and gambles with Ezekiel despite his condition. She later reveals that Tom bent over her last night with a carving knife in his hand, smiling at her. Ben assures her that Tom meant no harm, but Joyce is worried since Tom always talks about death. She could only wish for Tom to do something worthwhile to get his mind off.

Joyce leaving with Ezekiel bothers Ben, so he tags along as they return home.

At dinner, Adam, Hoss, and Little Joe discuss the accident and how Tom Edwards continues to blame their father for his condition. Adam insists that Ben didn’t cause Tom’s crippled leg. He clarifies that the two were climbing off a ledge when they fell on another, then Tom’s gun went off and shot him in the spine. Little Joe doesn’t understand why Tom still blames their father. Adam cuts their discussion, urging them to continue eating before the food gets cold. Ben returns home, and as they eat, he asks his sons what Tom can do now that they’re running out of money because of his gambling behavior. Adam suggests they build a small mill house at the Edwards, considering their area has a good water flow. Ben thinks it’s a fantastic idea, and the Cartwrights share a toast to celebrate his suggestion.

Joyce arrives home to Tom’s compliments. Tom requests for a kiss, then asks about her whereabouts. Joyce informs him about her visit to the Cartwrights, stating that she talked to Ben about the property his father left in San Francisco. Ezekiel enters the house; then Tom tells him that he’s gambling on his wife’s land, so if Ezekiel loses, they won’t owe him anything anymore. However, Ezekiel argues that he doesn’t stay there only for money. Ezekiel later refuses to bet on the land, and they gamble for five dollars instead.

Ben visits the Edwards the following day to make a business proposal—a grain mill—that would bring them money. Tom thinks it’s a great idea, but Ezekiel believes otherwise. Tom accepts the deal, then tells Ben he doesn’t blame him anymore, implying that it’s his gun and his fault. When Ben leaves, Tom argues that he’ll get a better nurse than Ezekiel once the business takes off.

Ben sees Joyce picking grapes and tells her about his business proposal with Tom. Although happy, Joyce brings up the complaints he brought up yesterday, saying she’s been dying since Tom always seems furious at her. Ben assures her that the mill will benefit them, even change everything for the couple.

The Cartwright boys start building the mill. Ezekiel visits the site and comments on Ben’s motive for helping the Edwards, even Joyce’s assistance to Adam. Tom asks Ezekiel to assist him in the area and asks Ben if he can help them with anything. Ben gives him a wrench to tighten some rods, and Joyce is delighted to see Tom’s progress. Hoss arrives later with a carriage of millstones, drawing the attention of everyone. However, stress rises when Ezekiel makes another comment, igniting Tom’s suspicion toward Adam. Joyce approaches Tom, happy to inform him that the wheel might operate by that night. She suggests holding a party with their neighbors, but her delight is short-lived as Tom brings up her relationship with Adam. Tom argues that Joyce enjoys Adam’s company. Joyce insists that she’s only happy because their life will be better because of the mill. Furious, Tom asks Ezekiel to take him inside, warning Adam to stay away from his wife. The Cartwrights realize Ezekiel’s behind the tension, and Ben runs after the crying Joyce.

Adam, Hoss, and Little Joe continue working on finishing the mill. Soon enough, they finally complete the mill, and the wheel starts working. Much to their delight, Adam goes to deliver Tom the news. However, a gun fires from inside. Inside, a drunk Tom tells Adam he has a reason to shoot because of his wife. Ezekiel fueled Tom’s suspicion that he thinks Ben betrayed him again. Adam informs him about the mill, but Tom says it doesn’t solve anything.

At the Ponderosa, Adam narrates the trouble he faced upon talking with Tom. He thinks Ezekiel has planted some bad ideas on Tom regarding Ben and Joyce, causing him to threaten to kill Ben. Adam asks if this suspicion is accurate, and although Ben doesn’t confirm, Adam expresses his support for the both of them.

Ezekiel takes advantage of Tom’s drunken state as they gamble. He bets that if Ezekiel loses, Tom doesn’t owe him anything. In the end, Ezekiel wins. Joyce hears his laughter, so Tom reveals that Ezekiel won the bet, meaning he owns everything now.

Ben arrives at the Edwards and hears a gunshot from inside. Ezekiel welcomes him, saying he owns the house. Lying dead on the floor was Tom, and beside him was Joyce, sobbing. Ezekiel reveals the list he made of all the bets they made, and that includes his wife. Ben stops Ezekiel from taking over, and a fight ensues between the two. Ben gains the upper hand as he gets Ezekiel’s rifle, killing him with several shots.

Joyce decides to leave town to start over again and orders Ben not to sell the mill.

Full Script and Dialogue of The Mill

Behind the Scenes of The Mill

This episode’s title in German is “Der Knecht,” which translates as “The Servant.”

The left buttock of Claude Akins’ pants in the fight between Ezekiel and Ben near the end of the episode shows a visible tear. The tears disappear towards the end of the scuffle.

Bonanza, a popular weekly TV Western series during the 1960s, is a fantastic show to watch alone or with family. NBC produced all 14 seasons of the show from September 1959 to January 1973. Out of 430 episodes, The Mill was the 36th and the fourth for the program’s second season.