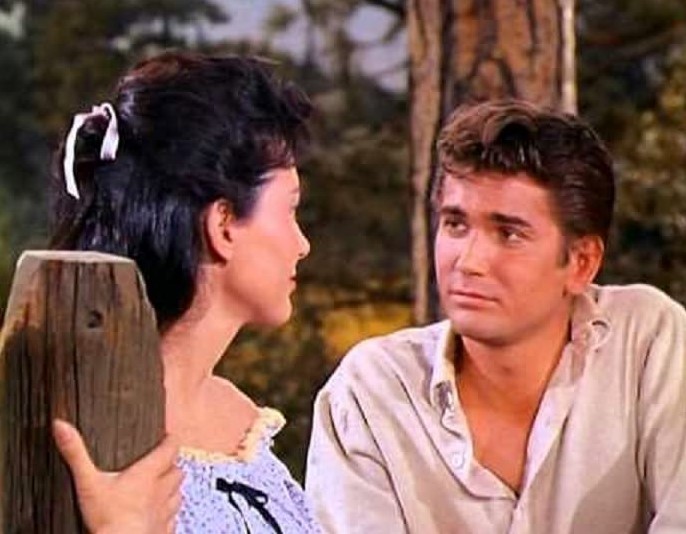 Anthony Lawrence wrote the forty-second episode, The Last Viking, which aired in 1960. Neville Brand makes an appearance as a guest star.

In this episode, Ben’s friend, Gunnar Borgstrom, arrives at the Ponderosa to visit the Cartwrights on his way to Canada. However, Gunnar’s visit dismayed Ben as he discovered that his friend was traveling with a gang of outlaws. The situation becomes even more upsetting for Ben when the fiends take Little Joe and his sweetheart as hostages.

Read the plot, which includes some fascinating trivia, or watch the full episode below.

Watch the Full Episode of The Last Viking

Watch the Full Episode of The Last Viking:

The Last Viking, the tenth episode of Bonanza’s second season, featured some of the show’s recurring and guest actors in addition to the lead cast. The actors in the episode are:

Hoss was helping a cow get out of the mud when a stranger came and asked about the Ponderosa. It appears that the stranger was their long-lost family relative, one of Ben Cartwright’s late wives’ brothers, Gunnar Borgstrom.

Gunnar is heading to Dakota, Canada, with a few compadres to seek their fortune. However, they didn’t ride with him down the mountains because they weren’t as friendly as him. The family invites him to supper, where Gunnar shares his visit to various countries. Unbeknownst to the Cartwrights, Gunnar leads a gang called Comancheros, who raid white settlements and trade goods to the Comanches. A knock interrupts their supper as one of Gunnar’s compadres, Vaca, arrives to request something to keep them warm as they sleep in the mountain. Gunnar orders him to return to their camp as Adam hands them a few blankets. Gunnar thanks Ben for the food and is about to leave. However, the family insists he spends the night in their house instead of returning to the mountain. Although hesitant, Gunnar accepts their offer. Meanwhile, at the table, Adam thinks their uncle Gunnar resembles an old Viking, to which Hoss agrees. However, Ben thinks Vikings are ruthless raiders that are no better than the Comancheros.

Gunnar and Ben talk about their life before they go to sleep. Gunnar later revealed his reason for visiting the Ponderosa: to see his sister’s son.

Meanwhile, Vaca returns to the rest of the Comancheros, saying Gunnar was eating good food with his relatives while they eat dry bread in their camp. The rest of the group believes Gunnar has been a good leader, but Vaca refuses this idea. He later declares the first goose they’ll steal would be at the Ponderosa.

The following day, Hoss offers to show the Ponderosa to Gunnar before he leaves. On the other hand, Little Joe is out visiting his girlfriend, Carrie. He also helped Carrie’s uncle, Abe, build a fence. It appears that the Cartwrights supported Abe and Carrie to start anew.

Hoss and Gunnar reach a lake in the Ponderosa. Hoss asks Gunnar to tell him more about his mother, considering he’s her brother. Gunnar reveals they didn’t get along well since they have opposite personalities. Hoss asks Gunnar to stay with them, but Gunnar tells him that he loves moving around.

Gunnar bids his farewell to the Cartwrights. Unfortunately, he had to leave before meeting Little Joe.

Gunnar returns to the camp where the Comancheros are preparing to move out. Vaca ordered the group to buckle up, making the rest of the Comancheros believe that Gunnar was getting soft, considering he had met his relatives. Vaca asks Gunnar to loot the Ponderosa to prove his strength and authority. Gunnar refuses, saying it’ll be dangerous since there are too many men at the ranch. Another rancher discloses that there’s another ranch in the foothills that they can raid. Upon hearing this, Gunnar declares that they’ll loot that area instead.

Little Joe and Carrie are heading back to the ranch when the Comancheros arrive, shooting everywhere. Carrie finds her uncle Abe and Mr. Crager shot, so she mindlessly rushes toward the area. The Comancheros see the couple, and Vaca takes an interest in Carrie. Joe stops Vaca, but he punches him to the ground. Vaca asks for Joe’s name, and upon hearing that he’s a Cartwright, he tells Gunnar that they’ll take Joe as a hostage.

Vaca tells some of the Comancheros that there’s a pain in Gunnar’s eyes, insisting he’s dying. He later asks Duzzaq to find him a snake, despite knowing Gunnar hates such.

Meanwhile, Abe McClaine arrives weakly at the Ponderosa. The Cartwrights found him barely alive, so they quickly carry him inside.

Duzzaq returns to camp with a rattlesnake in a bag, much to Gunnar’s surprise. The Comancheros make a bet on which direction the rattlesnake will head. Vaca pulls the bag from Duzzaq’s hand, dropping the snake. It headed towards Joe, ready to strike, but Gunnar shot it dead. Vaca ordered Duzzaq to get a snake to make the Comancheros believe Gunnar was no longer fitting to be a leader. After a fistfight, Gunnar kept his authority, and no one dared to go against him. As the Comancheros prepare to sleep, Gunnar discretely kicks the knife toward Joe, subtly helping them escape.

Hoss and Adam return to the Ponderosa, reporting the damaged and looted area, and Crager’s death, with no sign of seeing Joe and Carrie. Abe wakes up, describing the gang leader who robbed the place. They realize it was Gunnar, but Hoss couldn’t believe it after their time at the lake. Hoss later initiates to search for Little Joe. They agree to split up for a moment, then meet on top of a ridge so they can save Little Joe together.

Little Joe and Carrie untied themselves using the knife Gunnar kicked earlier. However, Vaca saw them leave, following them with a gun he picked from the ground. Joe stumbled as they ran to escape, hurting his ankle. He tells Carrie to keep running, and although she doesn’t want to, she immediately complies. Joe stands up and starts walking weakly but falls again after Vaca shoots him by surprise. Startled, Carrie cried loud enough for the rest of the Comancheros to hear. Carrie continues running until she encounters Hoss. She tells him that Joe’s dead.

Hoss and Carrie head back and find Gunnar. Carried tried to tell him the truth, but Hoss brushed her off, thinking Gunnar killed Little Joe. He attacked Gunnar out of rage, and they engaged in a fight. Hoss was about to shoot Vaca when Joe approached them with a shot on his chest. Joe tells Hoss that Gunnar helped them escape, much to his surprise.

Vaca shouts from a distance, threatening to kill Hoss, Joe, and Carrie. Gunnar, with his remaining strength, shoots Vaca. However, Vaca retaliated immediately, and Hoss shots him dead.

Gunnar asks for Hoss’ forgiveness before he dies in his arms.

Hoss returns to the lake, reminiscing the moment he shared there with his uncle Gunnar.

Full Script and Dialogue of The Last Viking

Behind the Scenes of The Last Viking

This episode’s title in German is “Die Wikinger,” which means “The Vikings.”

The 14-season Western television series, Bonanza, is a fantastic show worth watching alone or with the family. The show aired on the NBC network from September 1959 to January 1973. The Last Viking is the 42nd episode out of 430 and the tenth for the second season.