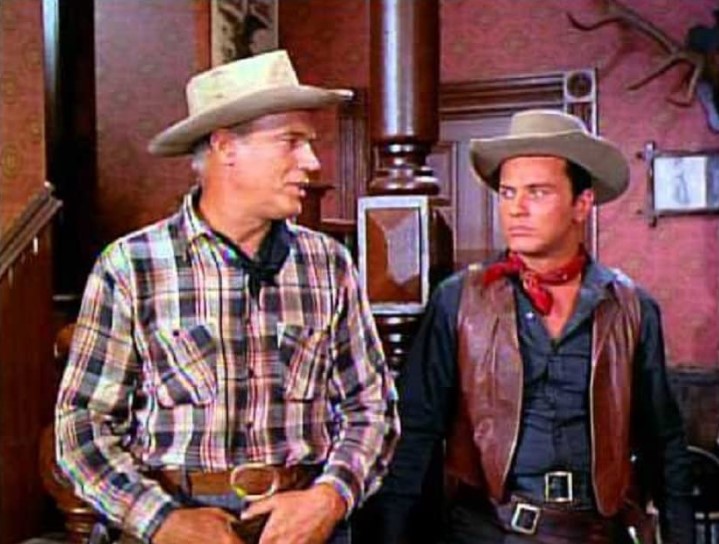 Bonanza continues to be one of the most beloved Western television shows of all time. The action-packed episodes sprinkled with comedy and family drama while addressing social issues made the program a fan favorite. Carey Wilbur wrote season two’s eleventh episode, The Trail Gang, which debuted on television on November 26, 1960.

An outlaw named Johnny Logan (Dick Davalos) swore to kill Sheriff Logan (James Westerfield), who also happens to be Johnny’s father. He travels under the alias Sam Jackson, signing on as a Ponderosa drover to later murder Sheriff Logan once the Ponderosa herd crosses the sheriff’s town.

Read The Trail Gang‘s plotline and some behind-the-scenes trivia, or watch the full episode below.

Watch the Full Episode of The Trail Gang

Watch the Full Episode of The Trail Gang:

The Trail Gang, the eleventh episode of Bonanza’s second season, featured some of the show’s recurring and one-time guest stars in addition to the main cast. The actors are as follows:

Ben and Hoss work with a new trail gang led by Brazos to take the herd back to Nevada. As they prepare to leave, a young drifter arrives, presenting himself as Sam Jackson. He aspires to join the cowhands and asks Hallelujah to introduce him to Ben Cartwright as he does the ordered errands.

Hoss finds Sam cut some wood. He figured Sam hadn’t eaten, seeing how he chopped the wood with an axe. Hoss also asked if he was looking for work, and Sam enumerated the skills he knew. They gathered the wood and went back to camp.

Hoss introduces Sam to Ben as a new cowhand. Ben then introduces him to Brazos, who recognizes him at first glance. They set out to work while Hoss watches them, sensing something suspicious.

It appears that Brazos knew Sam as an outlaw. He asks if they set him free, or he busts his way out. Sam didn’t answer directly. Instead, he warns him to stop asking questions, or trouble will ensue.

Later that evening, Brazos surprises Sam by calling him Johnny, his real name. He reveals that Sheriff Logan, Johnny’s father, kicked him out of town, leaving marks on his back. It’s as if he’s implying he’ll take revenge on the sheriff, but Johnny plans to kill Sheriff Logan on his own.

The following day, John Logan arrives at camp and introduces himself as the sheriff of Waycross station. He believes they should stay in their place rather than go into town. However, Ben refuses, believing the cowhands deserve to ease up after a long ride. Still, Sheriff Logan threatens to kill anyone who’ll disturb the peace in their town.

On his way back, sheriff Logan sees Johnny, believing he is his son. However, Johnny introduces himself as Sam Jackson. As the sheriff leaves, Johnny returns to Ben to get his wage and visit the town after encountering his father.

Sheriff Logan welcomes Ben and his group with a warning sign, forbidding trail hands to go further into town. Brazos confronts him, but Logan punches him, triggering Johnny to aim his gun at Logan. However, Ben orders Johnny to put his weapon down, as he doesn’t want violence and brutality to happen to his crew. The sheriff agrees they stay but insists they go no further than the part of the town allowed to them. Ben asks Johnny about his behavior, particularly if he has anything against Sheriff Logan. He later reveals that the town constable is his father and that he is determined to kill him as soon as he gets the chance.

Johnny meets a pretty lady at the town saloon, and Brazos introduces her to him as Melinda Bowers. Meanwhile, Ben and Hoss volunteer to join sheriff Logan as he makes rounds into town. Ben believes they should accompany him to prevent any trouble from his crew. Logan reveals to Ben that his foreman, Brazos, caused distress in the place after getting drunk, so he drove him off the town. Ben asks if he did the same to his son, but he only replies by saying his son was pushing to get himself killed. Just then, they heard gunshots ringing outside.

Ben, Hoss, and sheriff Logan arrive at the saloon with Hallelujah drunk, firing his gun. Hoss volunteers to handle Hallelujah, and they watch him talk to him until he drops asleep. Hoss takes Hallelujah to the livery stable while sheriff Logan reproach Johnny for staying in the saloon. Johnny is about to attack his father from behind as he leaves. However, Ben stops him, reminding him of his authority as his employer. On the other hand, Melinda’s work is over, so he tells Johnny he’s going home. Johnny offers to walk her home, but although hesitant, she soon accepts his offer.

As he walks Melinda home, Johnny asks why she works at Jake Rudabaugh’s saloon. Melinda reveals that she enjoys hanging out with the men of the trail gang. When the sheriff organized the things, no job was left for anyone involved with the trail gang, leaving her no choice but to work at the saloon.

Hoss and sheriff Logan saw Johnny over the deadline. Sheriff Logan declares he’ll take him in, but Johnny refuses and is about to shoot him when Hoss hits him in defense. The two take Johnny to jail to stay overnight until someone bails him out in the morning. Hoss apologizes to Johnny, but he tells Hoss that his father has always done the same. Johnny reveals that sheriff Logan sent him to prison as a kid. It appears he was running with Brazos and the other cowboys had fun one night, resulting in a lady getting shot by a stray bullet. Hoss thinks the sheriff did it to save Johnny from more trouble, but all Johnny can think of is revenge. There, he blatantly tells Hoss that he will kill the sheriff.

The following day, Ben bails Johnny out of jail. Ben tells sheriff Logan that he’s letting his affairs interfere with how he sets and directs the law in town. When Ben and Johnny leave, Jake and other townspeople arrive, insisting that sheriff Logan open up their place to other crews; otherwise, they’ll lose money. However, sheriff Logan refuses to do what they request.

When Johnny returns to camp, Brazos insists they take down sheriff Logan together. However, Johnny insists that it’s a personal affair. Still, Brazos plans to do things his way, even without Johnny. Ben tells Brazos that they’ll continue their trail tomorrow morning. Brazos tells him he’ll get the boys, but Ben orders no one will return to town. Despite this, Brazos intends to avenge himself, not letting the Cartwrights get in his way.

Brazos and his gang return to town, ready to have fun and pursue their plan. Jake and Judge Armbruster welcome the boys to their stores, saying they’ve lifted the sheriff’s deadline to serve them. However, they do worse, drinking to their hearts’ content, shooting bullets everywhere, and terrorizing the town.

Back at camp, Hallelujah puts coal oil on a whiskey bottle to trick the two cowhands guarding them. One of them took the bait, giving the Cartwrights the upper hand as they knocked them down.

The Cartwrights arrived in town and decided to consult the sheriff before making a move. Ben admits that they couldn’t control their crew. However, the sheriff refuses to interfere in compliance with the request of the townspeople. Ben believes that his reason for staying inside the quarters involves his son. That is true, as sheriff Logan couldn’t see himself killing his son.

After a while, Johnny, Brazos, and the rest of the gang meet up with sheriff Logan. Johnny tells him to draw his gun, but sheriff Logan unbuckles his belt holster, throwing it to the ground. Impatient, Brazos shoots sheriff Logan, and the Cartwrights shoot him back. Matilda and Johnny assist the sheriff back to his quarters. Now that Brazos is dead, Ben establishes his authority again, ordering the cowhands to continue their drive to Nevada.

Full Script and Dialogue of The Trail Gang

Behind the Scenes of The Trail Gang

The episode’s title in German is “Sperrzone für Viehtreiber,” which means “Forbidden Area For Cattlemen.”

This episode marks the first of two Edgar Buchanan’s (Hallelujah Hicks) appearances in the series. His second guest appearance was as John Henry Hill in the episode Sam Hill (1961).

This episode marks the first of two James Westerfield’s (Sheriff John Logan) appearances in the series. His second guest appearance occurred ten years later as Arthur Blackwell in the episode The Woman and the Mark (1970).

Bonanza is an iconic Western program you’ll enjoy watching alone or with the family. Each hour-long episode of the 14-season show ran under the NBC network’s production from September 1959 to January 1973. The Trail Gang is the 43rd episode out of 430 and the eleventh for its second season.