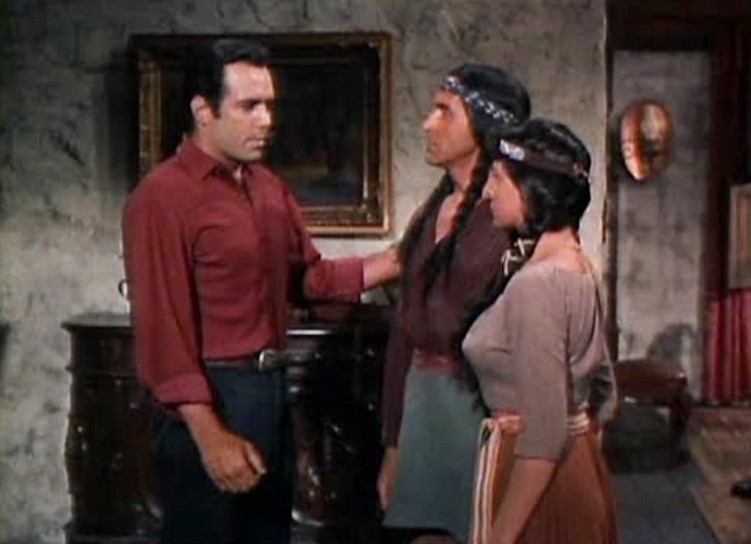 Bonanza, the first hour-long Western series filmed in color, tells of the adventure and drama of the fictional Cartwright family. The thirty-ninth episode, Day of Reckoning, written by R. Hamer Norris and Leonard Heideman, made its on-screen debut on October 22, 1960.

Meanwhile, Ike Daggett (Karl Swenson), an anti-Indian neighbor of Ben’s, vehemently disapproves of Matsou’s presence. When a raid leads to the death of his wife, Daggett holds Matsou accountable and, in retaliation, murders the Indian’s wife (Madlyn Rhue).

Read the storyline plus some behind-the-scene trivia, or watch the complete episode below.

Watch the Full Episode of Day of Reckoning

Watch the Full Episode of Day of Reckoning:

Day of Reckoning, the seventh episode of Bonanza’s second season, featured some of the program’s recurring and supporting actors. The cast includes the following:

Lagos, the son of a Bannock chief, attacked Ben by surprise on his property. Matsou, his brother, stops him from killing Ben. Lagos thinks it’s right to kill Ben, but Matsou insists they must learn to live with them despite their dislike of white people.

Matsou and his wife, Hatoya, take Ben to their camping tent to tend to his wounds. Lagos arrives by their place in search of Ben to take his scalp and present it to their father to make him proud. Matsou denies saving Ben, but Lagos insists on entering their tent to confirm. He also mentioned that it wasn’t wise of Matsou to marry a Shoshone woman like Hatoya, even trying to humiliate him for acting soft “like a woman” since they married. Lagos eventually leaves without seeing Ben.

At the Ponderosa ranch, Ike visits the Cartwrights to talk to Ben about his discovery. He reveals an “Injun” skull that turned up with his plow. Ike complains and refuses to live with the “Injuns,” then reveals Ben gave him land at the Ponderosa to homestead. His area is near where the Indians live, so he wants Ben to do something about it.

Ben wakes up and finds himself at Matsou and Hatoya’s place. Hatoya revealed they’re at his land, but Ben insists that there’s no Indian village at the Ponderosa. Matsou explained that he’s a Bannock while Hatoya’s a Shoshone—neither tribe would accept them, so they went off on their own. Ben asked about the Bible he found nearby, so Hatoya told him that he lived with a white couple for three years, and their spiritual belief influenced her.

Upon Ben’s request, Matsou and Hatoya bring him back to the Ponderosa. Adam invites them inside to talk about what happened. Grateful for their help, Adam asks them to stay so they can rest and eat. Hatoya thinks it’s God’s will that they save Ben, recalling his promise to let them stay in his land. However, Matsou doesn’t think it’s right to trust them.

The doctor arrives, and Ben is much better than he was before. Ben gives the couple a big piece of land to farm out of goodwill. However, Matsou rejects it, saying he knows nothing about farming, raising crops, or even caring for animals. Ben tells him they will teach him, and Hatoya persuades him to accept the offer. Seeing his husband still hesitant about the deal, Hatoya tells Ben they’d let him know their decision after they pray and talk about it.

At their tent, Hatoya insists they accept the offer so their sons and daughters can have a chance to have a better life. Matsou thinks it’ll make a significant difference in his way of living since he would have to be a farmer instead of a warrior and a hunter. He also thinks this would mean they’d stop being an Indian. Although still hesitant, Matsou eventually agrees.

Ike complains to Ben regarding the reward he gave the Indian couple. He thinks they’re bloodthirsty savages that won’t work, then tells him many bad things about them. Ben insists on providing them a piece of his land as a gift of gratitude, encouraging Ike to give the couple a chance.

The Cartwrights and other Ponderosa settlers assist the couple in performing tasks such as farming, sewing, and more. They eventually adopted white men’s fashion and hairstyles. Lagos enters the house to deliver the news of their father’s death as they eat their meal. He tells Matsou that their father died full of hatred for the white man and scorn for his youngest son, which leads to him becoming the new village chief. Lagos also warns him that their people want vengeance against the white people, expressing his need for his brother to return to the tribe. However, Matsou refuses, prioritizing his wife and their child’s welfare.

Matsou visits the Cartwrights to deliver the warning—the Bannocks are imposing a war. Ben sends the boys to warn the settlers as they prepare to ride into the valley. However, Matsou thinks his brothers have two people in mind: Matsou and Ben. Matsou reveals that his brother was the person who tried to kill him before, eventually leading to increasing hatred for him, who refuses to return to their tribe. Ben invites Matsou and Hatoya to stay at their house until the war ends. He also sends Adam to warn Ike, but Matsou insists he warns his neighbor, despite their mutual dislike for each other.

That night, Matsou visits Ike to warn him. However, Lagos and some from his tribe have arrived to attack Ike’s home, killing Ike’s wife and burning their house.

Matsou and Hatoya appear at the funeral the next day, with Hatoya offering prayers for the slain woman. Outraged toward the Indians, Ike draws his gun and shoots at Hatoya, leading to Hatoya and her unborn child’s death.

Matsou exacts his vengeance by impairing Ike and sending him back to the Cartwrights. They thought it could be Matsou’s doing, and Ike confirms it. Ike tells Ben that Matsou wants to meet him at a cave in the north fork or else every settler will experience what he got.

Matsou shackles Ben up with rawhide. Letting the sun shrink and stretch the rawhide, he hopes that Ben’s pain will alleviate his own. As the temperature rises, Ben begins to pray “The Lord’s Prayer,” but Matsou tells him to stop. Ben keeps going until Matsou can no longer take it, as it was a prayer that he’d heard his wife pray often. Matsou finally releases Ben, telling him that he hoped the torture would push Ben to hate him so he wouldn’t have to kill Ben.

The episode concludes with Matsou returning to lead his tribe after his brother’s death, while the Cartwright boys arrive to take Ben home.

Full Script and Dialogue of Day of Reckoning

Behind the Scenes of Day of Reckoning

Several guest stars from this episode appear in the show Star Trek. Ricardo Montalban and Madlyn Rhue, who acted as Matsou and Hatoya, teamed up again in an episode in the first season of Star Trek in 1967 entitled “Space Seed.” The duo played as Khan Noonian Singh and Lieutenant Marla McGivers, respectively. Meanwhile, Anthony Caruso (Lagos) appeared as Bela Oxmyx in the 1968 episode “A Piece of the Action” of Star Trek. Additionally, Gail Bonney also appeared as a witch in the Star Trek episode “Catspaw.”

In one scene (around 9:30), Ben Cartwright’s head moves as he reaches for the Bible. However, his hair does not move accordingly, revealing the actor’s toupee.

The iconic Western television series, Bonanza, is an excellent show to binge-watch alone or with family and friends. NBC was behind the production of this show, airing all 14 seasons on their network from September 1959 to January 1973. Day of Reckoning is the 39th of 430 episodes and the seventh for its second season.