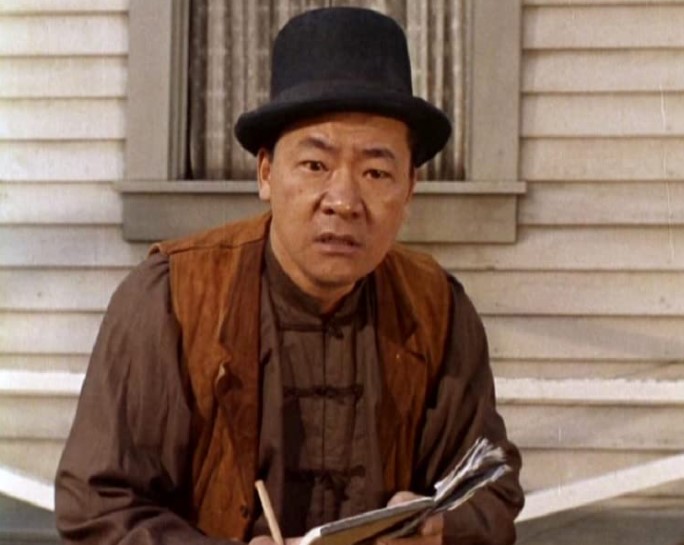 The Cartwright family, a family of four who lives at the fictional Ponderosa ranch, is the focus of the Western television series entitled Bonanza. The Tax Collector, season two’s twenty-second episode, was written by Arnold Belgard and aired on February 18, 1961.

Jock Henry (Eddie Firestone) becomes the tax collector for Virginia City at the request of a local bureaucrat. However, Jock becomes power drunk, imposing massive, unfair assessments on everyone in his path. Hence, when Jock finds himself in a series of profound personal crises, no one comes to help him—except Hoss Cartwright.

Read The Tax Collector‘s plot, including some fascinating trivia, or watch the full episode below.

The Tax Collector, Bonanza’s fifty-fourth episode and second season’s twenty-second, features the lead actors and some of the program’s recurring members.

The actors in the episode are as follows:

Hoss was passing Jock Henry’s place when he heard a commotion inside the barn. He discovers from Baxter, a ranch hand, that Jock was stealing some of Ponderosa’s cut lumber. Jock reveals that he’s only taking lumber to build himself a corral, then pledges to pay them back as soon as he gets enough money. Feeling sorry for Jock, Hoss takes responsibility and asks Baxter to keep it a secret. He even assists Jock by digging some postholes for him.

Hoss asks Jock to paint the fresh lumber before Ben realizes the wood came from the Ponderosa. Ben, Little Joe, and Hop Sing pass by and stop after seeing Hoss’ hat. Hoss tells them to move along while he follows to watch the race happening in town. Jock’s wife, Ellen, comes out of the house to remind her husband to pay the taxes.

At the town race, Joe’s horse, Raven, fails to beat Gatling. Jock bet his cattle on Joe’s horse, and since he lost, he can no longer pay his taxes.

Jock informs Hoss about his situation. Hoss advises Jock to get a job, but Jock believes no one will hire him. To help his friend, Hoss tells Jock to put on his best clothing as they go to Virginia City for a job hunt.

Despite their efforts to look for work, no shopowner in Virginia City accepts Hoss and Jock. Later, Dave Hart, the tax assessor, screams to capture Jock’s attention, causing the latter to hide. However, to his surprise, Dave came to offer him a job. Hoss immediately accepts the offer for Jock, but Jock is skeptical about it. Although hesitant, Jock takes the job right after.

As the Cartwrights were eating, Little Joe and Ben were waiting for Hoss to explain the cut on his cheek. Hoss reveals he went job hunting for Jock Henry. Jock suddenly arrives, so Ben welcomes him in for breakfast. Ben asks for Jock’s job, so Hoss tells him that Jock now serves as Dave Hart’s assistant. Jock tells Ben that he owes $1647.95 in taxes. Displeased, Ben questions Jock and his skill in tax assessment, considering Ben only paid $375 the year before. Jock informs them that he gets 2% of whatever he collects, so he doesn’t overlook anything.

Apart from Ben, the people of Virginia City find Jock’s tax assessment displeasing. They go to Dave Hart to complain, but Dave stands with Jock. Seeing nothing they can do, they take their complaints with Jock personally.

Meanwhile, Jock’s assessment angers Mrs. Nancy Hart, so she goes after him. A group of women joins the chase with the same enraged feelings. His assessments enraged everyone in town, forcing him to flee back home.

The Cartwrights arrive at Jock’s place and see the townspeople complaining about his tax assessment. Ellen defends Jock, reasoning that he’s new to his job. The women feel sorry for Ellen, wanting to help her by lynching Jock. However, the situation stresses Ellen, so Jock asks them to at least think of the baby she’s carrying. They eventually leave, as per Ellen’s request.

The Cartwrights, including Hop Sing, count chickens and livestock at the Ponderosa. They discover that Jock charged them double by including their unborn livestock in his assessment. Ben dubs Jock as one of the “sorry people” who enjoy the life of idleness. On the other hand, women like Ellen pity these people to the point that they disregard their flaws and fall in love with them. However, these “sorry people” take little prosperity or authority obnoxiously, to the extent of abusing them. Hoss and Joe ask how to handle this kind of people, to which Ben replies that you must outwit them.

Ellen finally realizes the change in Jock’s behavior, thinking it’s time to do something about it. She goes to the Ponderosa to tell Ben about Jock, and Ben agrees. Ellen thinks Jock’s job has changed him, so he asks Ben to talk to Jock so he can quit his job. Ben hides his joy in doing so by inviting her into the house so they can talk some more.

Ben calls Joe for a private conversation about Jock. Ben plans to teach Jock a lesson, including Hoss, who allowed his emotions to rule over his head. He tells Joe he wants to purchase a filly from Carson City, which Joe remembers as petite and skinny but lightning quick. Realizing Jock loves to bet on horse races, Joe agrees with Ben’s plan.

Ellen returns to the Ponderosa. Ben uses his terrible stage voice to announce Ellen’s arrival, ordering Hoss to see why she arrived. As Hoss steps outside, Ben, Joe, and Hop Sing eavesdrop on them through the window.

Ellen asks Hoss to assist Sally, their mare, who is experiencing excruciating pain. Although puzzled about what’s happening, he joins Ellen in her buggy. Delighted, Ben slaps Joe’s back while Joe comments on his father’s connivance. They prepare to head to the town’s horse race, where everyone is waiting while Joe gets the filly from the barn.

Everyone in town patiently waits for the race to start. Ben purposely made a $1,000 bet to Ellery, Gatling’s owner, for Jock to see. Jock walks over to inspect both horses as Ben and Joe slyly watch him. Jock finds Ellery’s horse beautiful while feeling sorry for Ben’s filly. Ben tells Jock that he intentionally bought the filly for $500 to race against Gatling, stating his intention to pay his taxes in full. Jock offers roughly $50, but Ben tells him it’s not much compared to the $1,000 he’s wagering.

Jock doesn’t want Ben, his best friend’s father, to fool himself by racing with the filly. However, this doesn’t stop Ben from pursuing his plan. Jock initially hesitates, but Ben manages to make a bet with Jock.

Back at Jock’s place, Hoss checked on Sally’s condition and figured she wouldn’t deliver her colt today. However, when he was about to leave to fetch Jock, Sally made a sound from the barn. Hoss and Ellen find Sally on the ground. Hoss instructs Ellen to get some hot water. However, by the time she gets to the front door, she experiences discomfort, signaling her labor too.

Ben reminds Joe to win the race so the town can have a new tax collector. Joe plans to let Gatling lead for the first two laps, then overtake on the third. Ben also tells Joe that they’ll lose $1,500 if he loses, in which Joe has to pay half the bet.

Hoss gets impatient waiting for Ellen to return with the water, so he looks for her. Hoss finds Ellen on the floor in the house, then carries her to bed. Ellen informs him that she’ll also need water. Hoss offers to get Doctor Snow, but Ellen says there isn’t enough time. Hoss assures Ellen that things will be fine but immediately shifts attention when Sally makes a noise at the barn. Hoss finds himself much like in a race, running back and forth to tend to Sally and Ellen’s needs.

The horse race starts, and everyone starts betting on their pick. Gatling leads the race, making the people bet for him more. Jock approaches Ben to increase their bet, to which they both agree.

To everyone’s surprise, Joe finally overtakes Gatling and wins the horse race. Ben asks Ellery for the $1,000 he won after winning against his friend. Joe snatches the $1,000 from his father’s grasp, reminding him about half of the bet. Jock looks sullen, then attempts to flee. However, Ben gets a hold of him.

After much time, Sally and Ellen finally gave birth. When Ben, Joe, Hop Sing, and Jock return, Hoss delivers the good news to Jock. Jock is happy to see Sally with their baby and Sally with her colt.

Jock’s joy is short-lived when he remembers his bet. Ben reminds Jock that he owes him two years’ salary, which stuns Hoss. However, since it’s a wage bet, Ben subtly suggests that he doesn’t have to pay if he stops working as a tax collector. Jock thinks he can’t leave his job because Dave Hart needs him at the office. However, Ben changed Jock’s mind after reminding her that Ellen and Sally needed him more than anyone else.

In the end, everyone contributes to helping the couple with some tasks.

Behind the Scenes of Tax Collector

Cosmo Sardo acted as a barber in this episode, which he later portrayed in the 1968 episode “The Price of Salt.”

Towards the end of the episode, Hop Sing mentions making Mulligan Stew for the Cartwrights to celebrate the Henrys’ new baby. Although the show occurred sometime in the 1870s or 1880s, Mulligan Stew first emerged in hobo camps in the early 1900s.

Bonanza is an excellent Western television program produced and broadcasted by NBC from September 1959 to January 1973. There were 14 seasons for viewers and fans to watch alone or with their loved ones. The Tax Collector is the 54th episode in a series of 430 and the 22nd for the show’s second season.