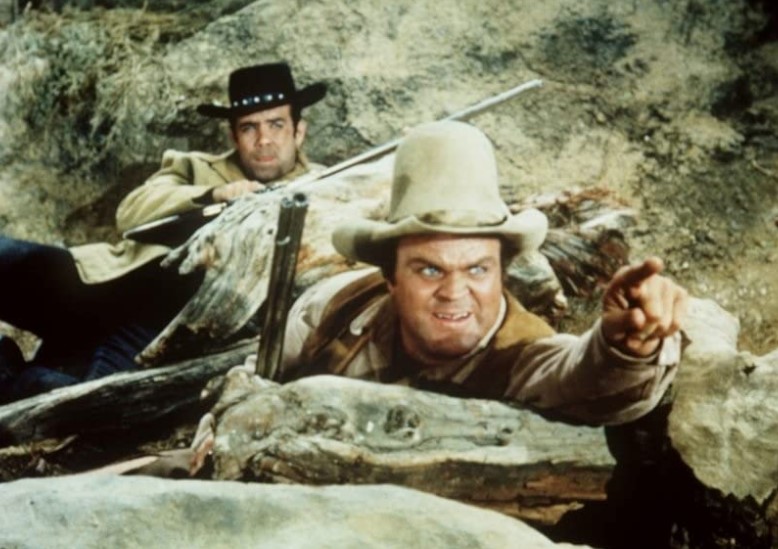 Ben Cartwright accuses Josh Tatum (Leif Erickson) of stealing cattle, later finding themselves engaging in a fight that only caused injuries for Ben. Ben’s sons, Adam, Hoss, and Little Joe, promise vengeance for their father by confronting Tatum themselves. On the other hand, the Cartwright boys also face difficulty fulfilling their father’s responsibilities on the ranch.

Read The Rescue‘s plotline, including some trivia, or watch the full episode below.

Watch the Full Episode of The Rescue

Watch the Full Episode of The Rescue:

The actors that made an appearance in the episode are as follows:

Full Story Line for The Rescue

Ben finds a cowhide with the Ponderosa brand at Josh Tatum’s place. He tells Josh he should have told him he needed beef instead of taking it without their consent. Josh doesn’t like how Ben’s accusing him of being a thief. He calls for his son, Gus, who is awaiting his signal to pull the trigger of his rifle.

Josh orders Ben to drop his gun belt and get off his horse. The two start arguing, which later leads to a fistfight. After their brawl, Ben ended up knocked to the ground. Once Ben gains enough strength, he rides on his horse and returns home.

The Cartwright boys ate their breakfast while worrying about Ben, who rode out before daylight. Ben suddenly returns home, then tidies himself before the kids realize what happened to him. However, that didn’t stop his sons from asking him questions. Adam asks if his horse threw him, Hoss asks if he bumped into a limb, while Joe asks if he forgot to duck. Ben replied “no” to each question, then confessed that he got into a little scuffle. He tells them to forget about it, expressing his desire to avoid more trouble.

When Ben leaves to change his shirt, the Cartwright boys discuss who their father fought with and what they should do about it. Hoss suggests they tell Ben to take things a little easy, and Adam believes it’s time for Ben to reduce his involvement in physical activities. They all agree that it’s time for Ben to become a supervisor, similar to what other ranches have.

The Cartwright boys suggest Ben avoid more trouble, to which Ben agrees. He changes the topic by telling the boys they have lost about 200 head of cattle in the past weeks. Ben asks them to flip a coin to see who’ll join him in finding the rustlers. On the other hand, one of them will stay at home. The Cartwright boys believe it’s not the best condition to travel, so Ben declares he’ll come with Hop Sing instead. They suggest Ben stay home to supervise the ranch, considering he’s getting older. Ben accepts their suggestion, but he feels saddened about the situation.

The Cartwright boys followed tracks to a box canyon. Once they reach a spot, the awaiting rustlers start shooting, which scared their horses to run away. The Cartwright boys and the rustlers exchange fire for a moment. Adam rushes to an injured Hoss. Hoss believes they’ll face a rough night, considering they lost their horses, got no food, water, or fire, and the rustlers will shoot them dead at any chance.

Ben is pacing back and forth, looking out the window as he anxiously waits for his sons to return. Hop Sing assures Ben they’ll return, especially Hoss, who’ll rush home once he smells his cooking.

Hop Sing’s claim was correct as Hoss could smell Hop Sing’s roast pork and sweet potatoes, even if they were at the boulders. However, Adam is skeptical, considering how far they are from home.

The rustlers kept their fire pot to inform the Cartwright boys that they were still there. Jake Moss worries that Ben will come looking for his boys, but Johnny assures him not to worry about the older man.

Despite their dire condition, the Cartwright boys remain alert for the rustlers. Adam shoots his rifle and hits Curly, one of the rustlers, through the billiard physics he learned in Virginia City. His shot darts off the canyon wall, successfully hitting his target.

Ben pursues a search for his sons. He encounters Josh, who he no longer trusts after assuming he took his cattle and entered his land. Ben reveals that he’s only being careful, considering the Ponderosa lost hundreds of cattle in the past month. Ben also tells Josh that he’s leaving to look for his sons, who went after the rustlers but haven’t returned. Josh couldn’t believe Ben would go after his sons alone without a sheriff or a posse.

While following a trail, Ben hears a gunshot. He dismounts to investigate, but Johnny spots him. A second later, Johnny successfully shoots Ben, who drops to the ground. Johnny approaches Ben with his rifle to check if he’s still alive. Assuming he’s dead, Johnny picks up Ben’s rifle. However, Ben gets up and shouts at Johnny, then shoots Johnny before the latter can fire back.

The Tatums arrive at Jake’s camp. Josh worries that Ben has reached their area, so Jake assures him that Johnny will take care of Ben. However, Gus returns to report that Johnny isn’t in his position. Josh orders Gus to return to Johnny’s position while he and Jake handle the Cartwright boys.

Hoss noticed a pattern from the shot fired at him. Whenever he shoots, the rustler in position, Jack, retaliates immediately. Hoss shows Adam and Little Joe an example. Adam asks Hoss to fire again. However, Ben shoots Jack in the shoulder before he can shoot back. The Cartwright boys find it odd that Jack’s down, considering Adam hasn’t fired. However, they immediately figured Ben had come to save them.

Ben sees his sons and fires three shots from his gun to inform them about his arrival. Joe returns the signal, then covers Ben while he approaches them.

Josh tends to Jack’s injury, who informs him that another person caused his wound. Josh believes it’s Ben. He also realized that the situation could have killed his son, changing his perspective on what was happening. Josh orders Jake to take Curly to Silver City to remove the bullet on his shoulder. Jake argues that Josh’s going soft, but Josh only wants his sons to be safe and out of harm. Once Jake and Curly leave, Josh ties his red handkerchief to a stick and waves his flag at Ben.

Ben tells Josh that Hoss has a wound in the leg but will be just fine. Josh replies by saying Jack got shot in the arm. He immediately confesses to rustling his stock, thinking Ben wouldn’t notice since they have a lot of livestock. Josh also tells Ben he’s done many things he’s not proud of, today’s event even leading to nearly killing his and Ben’s son. Josh apologizes, saying none of the cattle in Nevada was worth the lives of their sons. Ben agrees, and the dispute is finally over. Josh offers to help Hoss return to Ponderosa, round up the cattle they rustled, and let the Cartwrights take them to the sheriff.

Josh hopes things will differ between them once they’ve settled things with the sheriff. He also mentions the difficulty in raising kids, to which Ben agrees.

Full Script and Dialogue of The Rescue

Behind the Scenes of The Rescue

The episode’s title in German is “Böse Nachbarn,” which means “Bad Neighbors.”

Are you looking for a television program to enjoy alone or with your beloved ones? Try Bonanza! From September 1959 to January 1973, the NBC network aired the 14-season television series on their channel. The Rescue is the 55th episode out of over 400 episodes and the twenty-third for its second season.