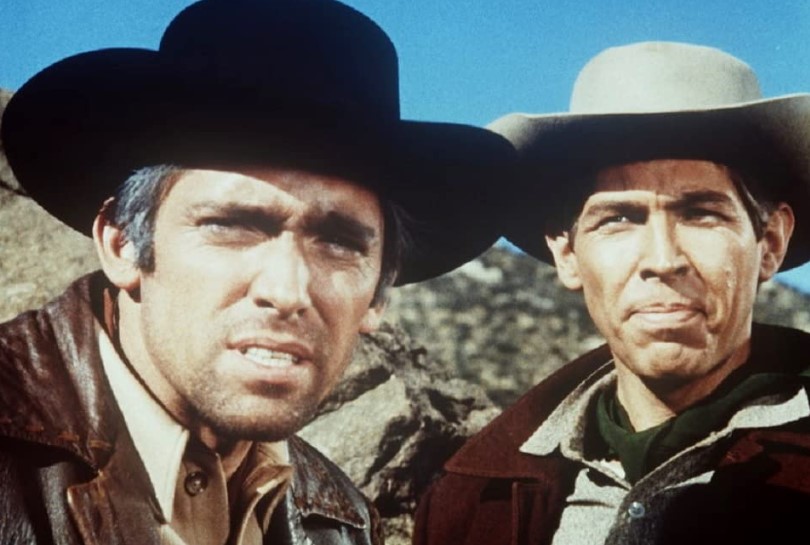 Bonanza drew viewers in with its compelling storyline, which changes weekly and includes themes and social issues other programs shy away from during its time. Ward Hawkins wrote its fifty-sixth episode, The Dark Gate, which aired on March 4, 1961.

Read The Dark Gate‘s plot and behind-the-scenes trivia, or watch the episode below.

Watch the Full Episode of The Dark Gate

Watch the Full Episode of The Dark Gate:

The cast members for The Dark Gate, the second season’s twenty-fourth episode, are as follows:

Meanwhile, Ben asks Adam to speak with Ross regarding the branding of his herd. However, when Adam visits Marquette’s place, Ross welcomes him with his gun. Adam, who thinks Ross is fooling around, reveals that he arrived to tell him about a few of his cattle in the Ponderosa herd. Ross refuses to believe Adam, accusing him of having an affair with Delphine. He fires his gun, scratching Adam on the arm. Delphine rushes inside upon hearing the gunshot, but Ross shoves her off. Adam notices the bruises on Delphine’s face, which Ross confirms were from him. Adam reminds him about their friendship, including Ross’ unwavering love for Delphine. However, Ross insists that Delphine admitted it was true. Delphine reasons that it is the only way to stop Ross from hitting her repeatedly. Adam attacks Ross, strong enough to make him unconscious. He ties Ross, then tells Delphine to gather a few clothes for her to use as she stays at the Ponderosa in the meantime.

Adam couldn’t believe that a level-headed man like Ross suddenly began acting erratically. He prepares a horse to bring Delphine to the Ponderosa, assuring her safety while he handles Ross.

Once Delphine’s on her way, Adam returns to the house and talks to Ross, who has finally calmed down. Like Adam, he doesn’t understand his behavior change. Ross agrees to let Delphine stay at the Ponderosa for a while, thinking it’s the best for now. Adam unties him, then returns Ross’ gun upon his request.

Later, a criminal named Monk Hartley arrives at Silver Dollar, Ross’ ranch. Ross offers his ranch as a hideout in exchange for a part in Monk’s gang of robbers. Monk accepts his deal, then fires three shots to alert his crew of their new home in the meantime.

Adam visits Virginia City to investigate what has caused Ross to change sourly. He starts with the bank to check if Ross has faced financial troubles. Mr. Begley reveals that even if the blackleg affected most of his young stock, he still managed to maintain a nice balance at the bank after changing his brand. Adam asks Joe, the minister next, who discloses how Ross stopped attending religious services in late fall. Joe also revealed that when he visited Ross out of concern, he threw him out of the house bodily, seemingly enjoying the desecration. Moreover, Dr. Paul Martin believes there’s no cure for Ross’s insanity as he’s gone too far through a dark gate.

Meanwhile, Ross and Monk are eyeing gold bullion that Monk believes is too secure to rob. Ross thinks it’ll be easy for Monk to kill the guards, but Monk refuses to do so, suggesting they cover their faces as they proceed with the robbery. Monk tells Ross to stay in his position while he and his crew approach the stagecoach. Monk asks the stagecoach driver to throw the box to the ground as it is all they need. However, Ross fires from afar, hitting the driver. One of the guards shoots in retaliation, but later, Ross shoots Monk, making it seem like an accident. Ross volunteers to take Monk to the forks while the rest of the crew unpack the bullion.

Unbeknownst to Monk’s crew, Ross has a different plan. He gets rid of Monk to have the gang for himself.

Meanwhile, Delphine busies herself by getting some stuff done at the Ponderosa. She asks Adam about Ross, considering it’s been a week since she last saw him. Adam assures Delphine there’s nothing to worry about since he’s most likely branding his young livestock with his new crew. To ease her worry, Adam offers to take Delphine outside for a ride to get a breath of fresh air.

Later, the Cartwrights, including their ranch hands and Sheriff Roy, gather to deliver terrible news about their cattle. The Silver Dollar brand had easily overwritten the Ponderosa brand using its new design. Ross made it seem like he bought a new herd when he only stole it from the Ponderosa. Adam refuses to believe his friend would do such a thing. Roy adds that Ross and his crew most likely were behind the murder and robbery involving the gold bullion shipment. He invites Ben to join him on a visit to the Silver Dollar ranch to verify their suspicions. Adam could only ask Ben to give Ross a chance to talk.

When Adam returns to their house, he finds a severely injured Delphine lying near the fireplace. Delphine reveals that Ross broke in, then died in Adam’s arms a bit after. Although feeling terrible, Adam takes a rifle and prepares to face Ross.

Monk’s crew worries that Ross, who appears to like killing people, will turn on them as quickly as he did on Monk. They find the Cartwrights and the sheriff arriving, causing Billy to shoot out of panic. Both parties exchange gunshots, leading to Sam’s death. On the other hand, Billy surrenders, then reveals that Ross went to the Ponderosa to get Delphine.

Adam follows Ross’ trail to the mountains. At one point, Ross got Adam cornered, forcing him to drop his gun. In Adam’s viewpoint, the Ross he sees now is no longer the Ross he knew. Despite wanting to help his friend, Ross fires at Adam, who retaliates after reaching his gun.

Ross doesn’t know what happened and why he’s in pain, lying on the ground. Ross asks Adam to get Adam back to his ranch to celebrate their fifth wedding anniversary. However, Adam tells him that the anniversary was ten months ago. At that moment, his best friend finally returned but died slowly in his arms.

Full Script and Dialogue of The Dark Gate

Behind the Scenes of The Dark Gate

After Ben branded a calf, a ranch hand approaches it, wiping his hand over the branding. This step prevents the calf from running into a bush while carrying fresh fire on its back, which may start a bushfire. It’s possible to ignite a bushfire considering a calf’s long hair could burn from 30 to 60 seconds. Since the calves have cowhides that are hard enough to protect them from burns, they may unknowingly spread fire after the branding.

Early in the episode, Ben requests Adam to talk to his best friend and have him come to the Ponderosa. During the close-up scene, it’s evident that Ben’s dialogue has been overdubbed and performed by a different actor entirely.

Now’s the right time to watch Bonanza alone or with the people you love! The 14-season Western television series ran under NBC’s production from September 1959 to January 1973. The Dark Gate is the 56th episode out of 430 and the twenty-fourth for its second season.