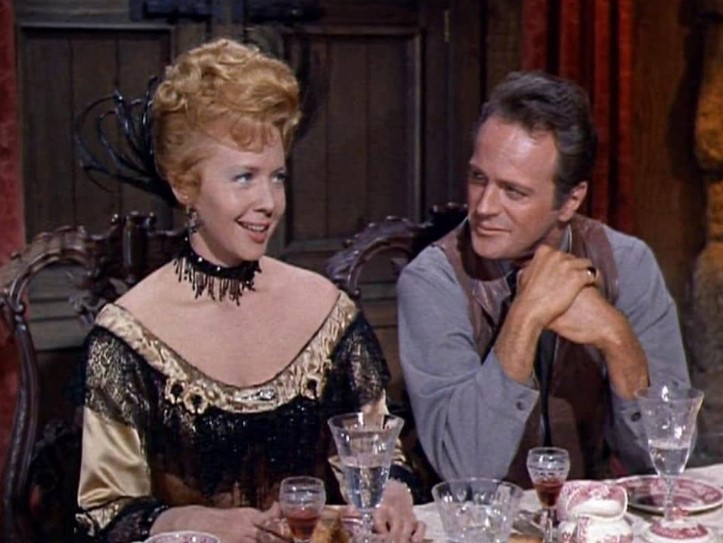 Bonanza’s formula for its success—a western setting, action-packed tales, and sporadic laughter—kept the program at its peak for a long time. William Cox and Theodore and Mathilde Ferro wrote the program’s fifty-seventh episode, The Duke, which aired on March 11, 1961. This episode was also one of the several episodes in the series directed by Robert Altman.

Maxwell Reed played the titular character, Clarence “The Duke of London” Simpson, an egotistical and self-centered professional boxer. When The Duke of London arrives in Virginia City, he challenges everyone to a public fight, provoking locals into brawls by acting up around their women. Hoss eventually joins The Duke in the ring, the ending leaving a significant impact on both the arrogant boxer and his patient manager/brother Limey (J. Pat O’Malley).

Read this episode’s storyline and behind-the-scenes information, or watch the episode below.

Watch the Full Episode of The Duke

Here are the cast members who appeared in this episode, the twenty-fifth episode of Bonanza’s second season:

Full Story Line for The Duke

The saloon girl, Marge, greets J.D. Lambert as he enters the town bar with Hoss and Little Joe. However, J.D. was too shy to continue talking to his girl.

Clarence Simpson, the Duke of London, arrives in Virginia City with his manager. He approaches Marge to kiss her hand, claiming she’s the most beautiful lady in the country. His manager, Harry Simpson, reminds him that ladies take away their wages, then invites him to the town pub to drink.

Harry announces that the Duke challenges all comers to a fight at the town pub. Any man who stands four rounds will win $500.

The Duke believes the citizens in Virginia City and the United States are cowards, deeming themselves lucky to get even a single fight in town. Harry thinks the saloon girl distracted the Duke, causing the other to reprimand his alcoholic tendencies.

The Cartwrights invite Marge to dinner with J.D. Ben asks about the Duke of London, praising his sons for ignoring the prizefighter. Marge reveals that the Duke stopped her in the middle of the lobby and kissed her hand. Hearing this annoyed J.D., but Ben assures him that it’s a typical gesture in Europe. Ben advises them to avoid the professional prizefighter, as they’re no match for him.

Once J.D. and Marge go outside for a walk, the Cartwrights discuss how meek their friend was, wondering how J.D. even started talking to Marge. Hoss and Little Joe don’t think the couple would work out, considering their opposite demeanor. However, Ben believes that love will make it possible.

Sheriff Roy approaches the Duke to tell him that using his fists on anyone would send him to jail.

Meanwhile, Marge and J.D. have just returned to the pub. The Duke calls J.D. a coward, causing the latter to point his gun at him. The Duke continues to taunt him, and although Marge tries to stop J.D., he eventually punches the Duke in the face. Harry calls it a fight, so the two start fighting. However, since the Duke is a professional prizefighter, J.D. is bruised on the floor. Roy insists on taking the Duke to prison for what happened, but Harry and the bartender admit that J.D. hit the Duke first. The Duke approaches Marge, telling her the man she needs is right before him. However, Marge only slapped him in response.

After learning what happened to J.D., Hoss and Little Joe are eager to avenge their meek friend. However, Ben believes it’s a terrible idea, considering the Duke is a professional prizefighter. Ben thinks it’s best to let another expert fighter, Heenan, the Benicia Boy, deal with the self-centered British prizefighter.

Meanwhile, despite his severe injuries, J.D. only worries about his image, upset that Marge had to see him made a fool of himself for challenging the Duke.

Hoss and Little Joe visit the pub to tell Duke about the Benicia Boy. Marge approaches the two Cartwrights to ask about J.D.’s condition, to which Joe replies bitterly. He excuses themselves for a moment as they have other business to handle. They speak with the drunk Harry, informing him about the Benicia Boy. Harry’s expression changes upon hearing about Benecia Boy Heenan. However, he maintained his arrogance by telling the boys he was excited to tell it to the Duke.

A week passed, and the Cartwrights continued to wait for Heenan to arrive. The townspeople watch the Duke work out. J.D. comes in the hall, and Marge asks if he’s alright. However, J.D. tells her he’s in a hurry, then goes to where Hoss and Joe are standing. Marge exits the hall crying, greatly affected by J.D.’s change of behavior towards her.

The Duke barges into Marge’s room, where he hears the lady crying. Marge reaches for her gun, but the Duke grabs her, forcing her into a kiss. Marge suddenly laughs, confusing the Duke. Annoyed, he assaults her repeatedly. Harry steps in to stop the Duke, but he gets beaten up.

Marge tells J.D. about the Duke and Harry. Hoss and Little Joe rush to Marge’s room while J.D. stays with Marge to keep her company. Hoss and Joe find Harry lying on the floor, then assists him in sitting on the bed. Harry tells them that the Duke doesn’t understand her view on things, then reveals they’re brothers, much to Hoss and Joe’s surprise. Although injured, the Duke’s words hurt so much more for him. Harry only wanted the best of the Duke, but he no longer wanted to stay with him after what happened. Hoss is infuriated by how the Duke treated J.D., Marge, and even his brother. Joe feels the same with him, so he accompanies Hoss as he challenges the Duke once and for all.

Sheriff Roy stood as the referee for the bare-knuckle fight, which Ben organized against his will. The Duke appears to have the upper hand in the first rounds, but Hoss knocks the Duke to the ground in the third round. By the fourth round, the Duke can no longer approach the attacking Hoss, falling to the ground. The Duke and his manager/brother come to terms with the defeat-induced humility after the Duke finally recognizes that he’s no good without his brother.

After the Simpsons settle their account, Ben tells them about the proposed fight with Benicia Boy Heenan in San Francisco. The Duke sincerely apologizes to Marge and J.D. before leaving to confront Heenan.

Full Script and Dialogue of The Duke

The legendary Western series “Bonanza” is a terrific show to watch alone or with family. Each hour-long episode ran under NBC’s production from September 1959 to January 1973. There are 14 seasons and 430 episodes, with The Duke as the 57th or the twenty-fifth for its second season.