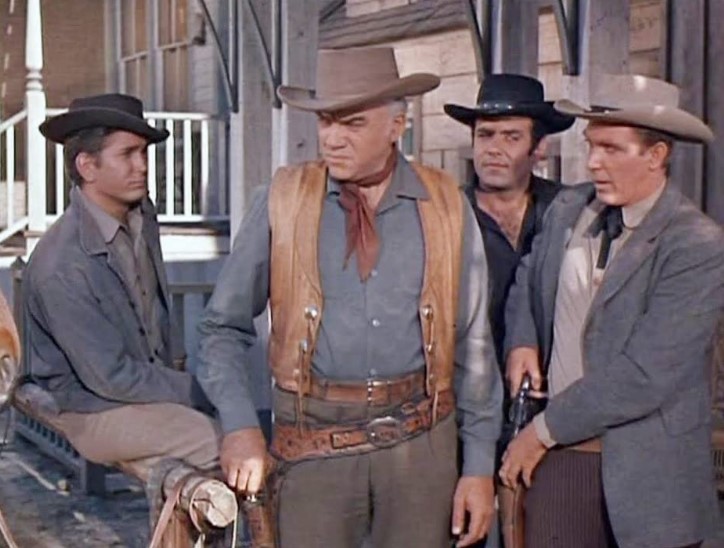 Bonanza features the life and connection of the Cartwrights within their family and community through its weekly hour-long episodes. Cutthroat Junction, written by Nat Tanchuck, was first aired on March 18, 1961. This episode became the fifty-eighth episode of Bonanza and the last-minute replacement for the episode “The Gift,” broadcasted the following week.

The Cartwrights accompany troubleshooter Jed Trask (Robert Lansing) to a town called Cut Throat Junction. Trask’s freight company assigned him to round up a gang of thieves disrupting the delivery of goods and mail, giving him the freedom to accomplish the task by all means.

However, Trask suddenly gets fired in the middle of his mission. Disgruntled by the change of events, Trask switches sides, joining the thieves in their efforts to hijack vital shipments heading for Virginia City.

Read Cutthroat Junction‘s plot and background trivia, or watch the full episode below.

Sierra Freight and Stage Lines, a freight company, sends a troubleshooter, Jed Trask, to handle what’s interrupting the arrival of mail and supplies in Virginia City for six weeks. The company gives Jed and his wife, Belle Trask, all the means to get Sierra on schedule again, even if it requires them to kill someone.

The Cartwrights, led by Ben, join the Trasks as they head to the Latigo (Cutthroat Junction), which, according to Ben, is a town full of killers.

Jed and Ben visit the private office of the duly appointed division superintendent of the Sierra. At the same time, the Cartwright boys go to the livery stable. Jed orders Big Mike to leave town, then straightens up the depot. However, Big Mike has other plans to handle Jed. Joe comes to the office, informing Jed and Ben about the mail and supplies stocked at a barn in town.

Jed and the Cartwrights discover the barn loaded with supplies not only for Virginia City but for half the West. Joe suggests they start moving some of it through the stage by the end of the week. Jed agrees, then assures them he’ll send a message to the home office to load the rest of the stuff.

Jed wakes up in bed, then tells Belle he needs to continue his assignment. However, when he tried to stand up, the pain hit him. Belle assures Jed that the Cartwrights are taking care of everything, but Jed doubts they know how even to manage a stage line. He thanks Belle for asking the Cartwrights to stay and run the depot. Jed insists on running down Big Mike and putting fear into everybody to accomplish his task. Belle worries Jed will only get hurt doing so, but Jed assures her that he’s doing this for her.

The following day, the stagecoach for Virginia City arrives in Latigo. The driver has a letter for Jed. Ben and Jed think it’s a paycheck. However, Jed’s mood turns bitter upon reading the content. He asks Ben to assist him on the wheelchair Belle brought, then they go outside, reminding the people he’s still in the town.

The Cartwrights recognize Jed’s loyalty to the Sierra, but Ben thinks he’s more of a fanatic.

Belle noticed that the letter had been bothering Jed for a while. Jed tells her it’s company business, but Belle insists it’s more than that. Jed reveals that the company has fired him, devastated that they kicked him out after serving them for ten years. Belle assures Jed that he’ll find other jobs, but he doesn’t like the idea. Instead, he plans to ruin Sierra no matter what it takes.

Jed visits the gang of thieves, offering them a setup that can bring them more money. They initially hesitate since they know Jed’s a loyal company man but agree later.

Jed and his gang of thieves find Big Mike’s camp. He ruthlessly kills him, then guides the crew to raid every Sierra freight shipment. Jed does all this behind the Cartwrights, who still believe he’s recovering from his injuries.

Ben reports to Jed that another freighter hasn’t arrived. Jed tells Ben it’s Big Mike, but Ben believes someone else is behind the overdue, someone who knows the shipment reports and schedules.

Later, one of the town citizens brought Big Mike’s dead body to town. Ben realizes it is Jed’s doing, which Jed confirms by standing up and claiming the place is his now.

The Cartwright set forth to get the Sierra back in business, so Virginia City and the Ponderosa receive their supplies immediately. They confront Jed in the town bar, along with a few honest citizens in Latigo who believe it’s time for Jed and his men to leave.

Jed and his gang of thieves set camp outside the town. He plans to return to town, burn the barn and the people in it, and kill anyone running out. Belle refuses to support Jed, especially in his plan to shoot the Cartwrights in cold blood. However, blinded by anger, he slaps her to the ground.

The Cartwrights and a few townsmen are busy arranging the supplies for the next stagecoach. Belle enters the barn with a rifle to escort the Cartwrights out of town. Hoss manages to stop her, and she begins sobbing. Belle reveals that Jed is planning to burn them out, with the Sierra firing him taking a massive toll on his life.

Later that evening, Jed and his gang arrive as they planned. However, the Cartwrights and the townspeople were ready for their arrival, so they started firing at them before they could set the barn on fire. Jed and his gang immediately took cover inside. Ben warns them to surrender or they’ll burn out. Terrified, his gang members yield on their own, leaving him alone in the barn.

Ben approaches Jed to talk to him. However, Jed starts shooting Ben. In the end, Jed leaves the barn, then falls to the ground to his death.

The shipment finally returns to its normal state in Virginia City, except for the rate increase. Meanwhile, Belle Trask has a show in Comstock Hotel as the world’s greatest woman trick shot. The Cartwrights decide to have dinner at the hotel and watch their friend’s show.

Behind the Scenes of Cutthroat Junction

Bonanza, which features the adventures of the Cartwrights, is a fantastic program worth watching alone or with your beloved ones. All 14 seasons and 430 episodes ran on NBC from September 1959 to January 1973. Cutthroat Junction is the 58th episode out of 430 and the twenty-sixth for the second season.