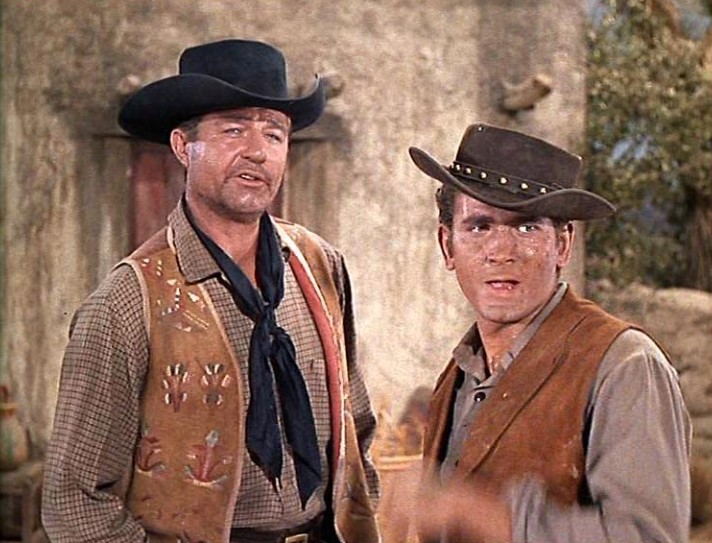 Bonanza, a Western series that initially aired back in the late 1950s, tells the story of the fictional Cartwright family and their connection with the surrounding community. The fifty-ninth episode, The Gift, written by Denne Petitclerc and Thomas Thompson, aired for the first time on April 1, 1961. However, its first appearance was supposedly on March 18, 1961.

Joe Cartwright travels to Yuma, Arizona, determined to capture a white Arabian stallion for his father’s birthday. Unbeknownst to the young Cartwright, it will be a dangerous trip for him. En route, renegade Indians attacked Joe, which led his life to the hands of Emeliano (Martin Landau), the mercurial Mexican who raised the horse he’s going after.

Read The Gift‘s plotline, including behind-the-scenes information, or view the episode below.

Watch the Full Episode of The Gift

Watch the Full Episode of The Gift:

The Gift, the twenty-seventh episode of Bonanza’s second season, featured the following actors:

Full Story Line for The Gift

Hoss and Adam wake up in a hotel room, discussing the surprise birthday gift, a white stallion, that Joe has to get from Yuma, Arizona. Ben is outside when a rider arrives at Fort Tyson with an arrow in his back. The citizens gather to hear the man as he reports about the renegade Indians assaulting and killing all whites they find at the fort and Yuma.

The news worries the Cartwrights, especially Ben. He prepares his things, planning on going with the army to look for Little Joe. Adam and Hoss try to calm him down, but Ben can only rant about his sons being stubborn, putting themselves in danger. Adam and Hoss reveal that Joe went to Yuma to get him the birthday present they’ve planned since the year before. It’s their way of saying they loved their father since they couldn’t find themselves saying the words directly. Ben says, “Old fools make poor dads,” overwhelmed with emotions, then leaves with his jam-packed saddlebags.

Meanwhile, Joe and Emeliano, the Mexican care owner of the stallion ( which he calls The Big White One), try to evade the renegade Indians as they travel in the desert. They eventually run out of water, so Emeliano suggests they go to Sam Wolfe and his group of ruthless Comancheros. Emeliano reveals that he used to ride with the group until Colonel Greene gave him a job. Although they both know it’ll be dangerous, Joe agrees to give it a shot.

Meanwhile, the Lieutenant in Fort Tyson couldn’t organize a search for Little Joe as he needed his troops to guard the fort. Ben has no choice but to find Joe himself. Adam and Hoss couldn’t let their father search for their youngest alone, so they joined him despite his initial hesitance.

Once they’ve reached the camp of the Comancheros, Emeliano asks for water, which Sam immediately grants to his old friend. As for Joe, he’ll need to give all his money and the stallion to get water. Joe refuses, then punches Sam, but the gang members knock down him and Emeliano. They have the two locked in a shack while Sam and his younger brother Cash enjoy the beauty of the white stallion.

Sam offers Emeliano a chance to rejoin his gang. Meanwhile, he plans to use Joe as the turkey in a turkey shoot. Emeliano asks about the white horse, to which Sam replies as his property. Emeliano tells him that the horse means a lot to him, so Sam gives him time to consider his offer.

When Sam leaves, Joe suggests Emeliano take Sam’s offer to keep himself alive. However, Emeliano believes he’d rather die than surrender the horse to a beast like Wolfe. Emeliano also thinks that Joe giving the white horse to his father moved his heart, considering Emeliano has always wanted a son too. He then lures a guard over the shack. Although the guard recognized his escape attempt, Emeliano managed to stab him in the back, allowing them to escape.

Joe and Emeliano head to the corral to get their horses. Joe finds Cash whipping the white stallion tied to a post. The two engage in a fight. When Joe gains the upper hand, he hits Cash towards the stallion, who stomped him multiple times. Only Emeliano was capable of calming the horse down. Before the other bandits chase them, Joe and Emiliano ride away with their horses. Sam heads out of his shack after hearing the commotion. Seeing his young brother’s dead body made him furious. With all his Comancheros, Sam heads off after Joe and Emeliano, determined to avenge his brother’s death.

Joe and Emiliano head for the rocky part of the canyon to get away from the Comancheros. Emeliano makes Joe take the stallion, as it’s fast enough, and believes they’re worthy of having the horse rather than Sam. Joe refuses to leave him, so Emeliano forces him at gunpoint. With no choice, Joe leaves, assuring Emeliano that they’d take care of his white stallion.

After Joe leaves, the other half of Sam Wolfe’s men arrive, shooting Emeliano. They see Joe running through the desert, so Sam orders his men with the fastest horses to give them his horses as he chases after Joe.

Meanwhile, Ben, Hoss, and Adam find Emeliano lying face down on the ground. With his remaining strength, Emeliano tells them about a boy on a white horse. Ben tells him that it is his son, allowing Emeliano to understand that they are his family. He had no chance because his horse was tired, so he let Joe ride the faster white stallion, believing the horse would be happy at the Ponderosa. Tearful, Emeliano eventually falls to his death.

Sam’s other Comancheros reach the Cartwrights, pinning the Cartwrights to a gunfight. Ben runs off alone to follow Joe, leaving Adam and Hoss to finish with Sam’s bandits.

Seeing the white stallion moving farther, Sam had no choice but to shoot the horse down. The horse isn’t dead but is slowly dying. Joe uses his last bullet to put the great horse out of his suffering. Little Joe starts running while Sam watches him with a fresh horse from afar.

The heat of the desert sun and lack of water caused Joe to stumble, falling to the ground. He falls on the dry brown grass, discovering a nearby stream that has allowed the crops to grow. Joe rushes towards the water with excitement, but Sam gets him with a lasso, tying his limbs so he wouldn’t get to the water.

Sam heads for the stream to fill his container of water. Shadow tips over him, not knowing it is Ben Cartwright, the father of the man he just tied. Upon seeing Ben’s cold demeanor, Sam claims Joe is a horse thief. However, Ben declares Joe is his son. Sam immediately draws his gun, but not fast enough to shoot Ben, who shot him dead. Ben rushes to untie Joe and helps him drink water. Joe tells Ben about the horse and Emeliano, and Ben informs him he knows everything. Ben also sadly declares Emeliano’s death. Joe lets Ben know that the horse was supposedly his present, but seeing his youngest alive is enough gift for Ben.

Adam and Hoss arrive shortly after and help Joe to the horse. Ben kneels near the stream to fill his canteen, stares at the heaven above, and says, “Thanks.”

Full Script and Dialogue of The Gift

Behind the Scenes of The Gift

Seeing the horse dying in agony, Little Joe uses his “last bullet” to kill the white stallion to end its pain. He shoots the horse and throws his pistol, which he renders useless now. However, the audience can see the back of his gunbelt full of bullets as he walks toward the horse. (Joe doesn’t have any ammunition on his gun belt; those were only evenly-spaced rivets.)

When Little Joe and his friend, Emeliano, escape from the shack, Joe drags the right-handed Commanchero inside, then emerges with a left-handed pistol belt.

The top of the background set piece is visible when Sam Wolfe tries to take the white stallion, causing the horse to rear up in aggression.

The Bible verse Little Joe claims his father, Ben, taught him comes from the second half of Ecclesiastes 9:4.

Bonanza, the iconic Western television program, is an excellent series to binge-watch alone or with the people you love. NBC was behind the production of this show, televising all 14 seasons on their network from September 1959 to January 1973. The Gift is the 59th of 430 episodes and the twenty-seventh for its second season.