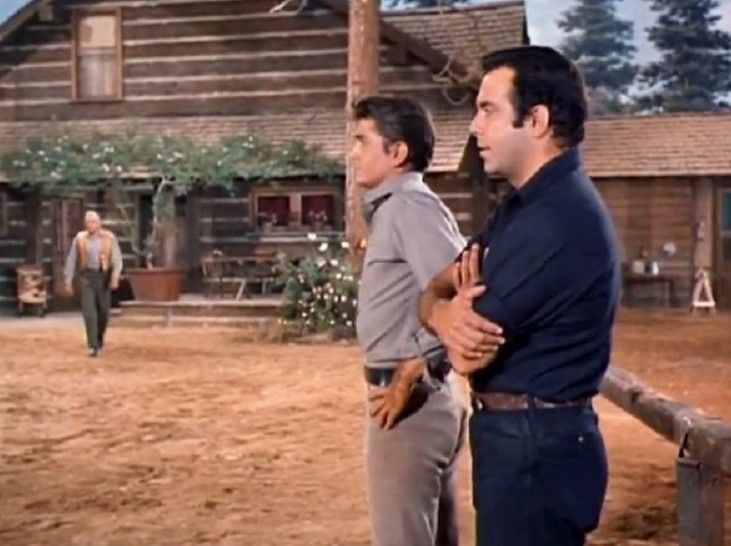 The weekly nontraditional Western television series, Bonanza, centered around the Cartwright family, led by the patriarch Ben Cartwright. The show’s fifty-third episode, Vengeance, was written by Marion Parsonnet and first telecasted on February 11, 1961.

Hoss Cartwright accidentally killed neighboring farmer Willie Twilight (Keith Richards) out of self-defense. The situation prompts Willie’s brother, Red (Adam Williams), to seek vengeance. However, the problem gets worse after Little Joe swears revenge on Red after Hoss gets severely injured because of a gunshot.

Beverly Tyler joins the cast as a guest, acting as Mary, who finds herself caught in the middle of the dispute.

See Vengeance‘s plot, behind-the-scenes information, and full episode, which are all available below.

Watch the Full Episode of Vengeance

Watch the Full Episode of Vengeance:

Apart from the main cast, episode 53, Vengeance, also features recurring and guest cast members. The actors that appeared are as follows:

Hoss visits Virginia City to buy supplies when several gunshots ring from the saloon. As he goes over to investigate, he finds a drunk Willie Twilight firing his gun in all directions. The saloon girl, Mary, tries to stop him, but Willie shoves her aside. Hoss calmly approaches Willie, taking one of the guns he’s holding. However, Hoss finds difficulty in getting the other. Hoss pushes Willie in an attempt to grab the other gun, causing him to fall back and hit a support column hard enough to result in his death. This event shocked everyone, including Mary and Hoss, who couldn’t believe what had happened.

Mary was visiting Willie’s grave when a man approached her, asking about her plans regarding Willie’s death. She argues that Willie was drunk, but the man thinks it’s still improper for him to get killed. The man introduces himself as Willie’s brother, Red Twilight. Hearing how kind and gentle Willie was with Mary gave Red more reason to believe his brother didn’t deserve his death. Red subtly implies vengeance against Hoss Cartwright. Mary tries to stop him by saying the Cartwrights were Willie’s friend, but Red doesn’t care.

Back at the Ponderosa, Hoss fixes a wagon wheel with a brooding expression. Little Joe assures him that it was just an accident, while Adam tells him he understands what he feels. However, Hoss walks away, telling his brothers he’ll mend some fences down to the low country alone.

Hoss rides into the areas, searching for fences he can mend. Unbeknownst to him, Red watches him over some high ground, ready to shoot him at any second. Red continues to fail in his plan. Eventually, sunset came, forcing Red to abort due to light loss.

Little Joe tried to slip out of the Ponderosa, worried about Hoss as he hadn’t returned yet. Adam finds him at the barn, so Joe informs him he will try to find Hoss. Joe prefers not to inform Ben about his plan and asks Adam not to tell him. Adam joins Joe in his search for their brother.

Hoss rests for a moment to drink and freshen up. Red positions himself on higher ground, ready to shoot him.

Meanwhile, Adam and Little Joe were riding to find Hoss when they heard a gunshot nearby. They find Hoss lying face down near Mud Creek. Little Joe insists on going after the gunman, thinking he couldn’t have gotten far yet. However, Adam stops him since Hoss’ life is at stake, and it’s best to return to the Ponderosa to tend to his wound.

Back at the Ponderosa, Ben anxiously waits outside Hoss’ room. The doctor informs him of how severe Hoss’ condition is, considering he has lost a lot of blood. In the meantime, he advises they wait and pray for Hoss’ health. Ben hopes what happened isn’t connected to Willie Twilight. While Little Joe chooses to sit outside Hoss’ room, Ben orders Adam to visit the sheriff and ask if Willie has any friends.

Later that day, deputy sheriff McNeil arrives at the Ponderosa to tell the Cartwrights that Willie has a relative who appeared in town three days after the accident. He visited Willie’s grave, talked to Mary, and booked a hotel room under his name, Red Twilight. Little Joe believes Red shot Hoss, but the sheriff needs more proof to solidify his claim. Upon seeing Joe’s outburst, McNeil informs Ben that it’s only fitting to deliver this information personally to stop them from shooting someone in town who might be innocent.

Ben returns to Virginia City with McNeil to talk to Red Twilight. He tells Red that Willie’s death was an accident, then apologizes. Ben also asks what Red does for a living, to which Red answers, scouting for the army, fighting Indians, and hunting. He asks if Red owns a buffalo gun since it is the weapon used to shoot Hoss. Red refuses to answer directly, believing Ben’s accusing him of murder. Ben replies by saying it’s up to the law to make such an assumption.

Red stops by Mary’s place as she prepares to visit Willie’s grave. Red tells her he’s leaving town, asking Mary to come with him since Willie’s dead and she got nobody else. However, Mary refuses, saying she’d be happy to stay in town with her memories of Willie. Mary also insists it was an accident and that it wasn’t Hoss’ fault that Willie died. Still, Red insists on seeing Hoss die. Mary realizes that it was Red who shot Hoss, then orders him to leave town immediately. She thinks shooting him, almost leading to his death, should be enough. However, Red insists on killing him as revenge for Willie.

Joe admonished his father for doing nothing, even after talking to the man who shot Hoss. Ben argues that there wasn’t enough proof to prove their claim, insisting they leave the law to do the work. That evening, Joe visits Hoss in his room, promising vengeance against the person who shot him.

Before leaving, Red leaves his complete forwarding address to the hotel manager.

Meanwhile, Ben and Adam realize that Joe left early to look for Willie’s brother. Ben orders Adam to look for Joe before something happens to him. Mary visits the Ponderosa to tell him she had nothing against the Cartwrights regarding Willie’s death. She reveals that sometime before, they met a doctor in Placerville who said Willie’s heart had a bad condition that could lead to his death if he wasn’t careful. However, Willie started to change, becoming a man who wanted to die. Mary further narrates how Willie started drinking and fist-fighting, saying he was tired of waiting for his death to come. She tried to stop him, but he only expressed his willingness to die. Hoss suddenly talked, asking what Mary said. Mary assures Hoss that Willie liked the Cartwrights and that it wasn’t his fault. However, they still have to handle Red, who swore to kill Hoss. Ben asks Mary to stay with Hoss while he gets deputy sheriff McNeil so she can tell him the information she shared with them.

After following his trail, they figured Red tricked them as he headed back to the Ponderosa. Once he arrives at the ranch, he shoots one of the Ponderosa ranch hands. Hoss asks Mary to get the gun from Ben’s desk. Red finds Mary holding the weapon, confident she wouldn’t shoot Willie’s brother. Red takes the gun from her hand and slaps her to the ground. Adam and Joe arrive shortly after, sneakily entering the house. Red shoots Adam and Joe punch him from behind. They continue fist-fighting outside until Joe gains the upper hand. He angrily aims his gun at Red’s head. Adam stops him, stating he’s no different from Red if he shoots him dead. Joe returns to his senses and agrees to take Red back to the sheriff. Ben arrives with McNeil, who takes Red.

Ben and Hoss are glad Joe didn’t kill Red, and they all return to their house.

Full Script and Dialogue of Vengeance

Behind the Scenes of Vengeance

The episode shows Hoss, who had just gotten out of bed a few minutes before, walking back to the house in Ponderosa wearing his nightgown and boots.

Bonanza is an excellent Western television program to watch alone or with family and friends. NBC produced the program from September 1959 to January 1973, having all 14 seasons aired on their network. Vengeance is the fifty-third episode out of 430 and the twenty-first for its second season.