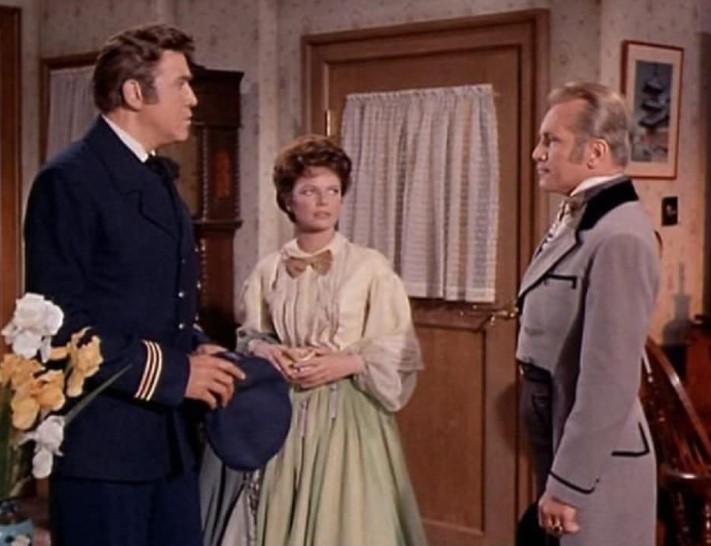 Bonanza is a Western television show depicting the Cartwrights’ life while addressing problems faced by the family and their surrounding community. Anthony Lawrence wrote the sixty-fifth episode, Elizabeth, My Love, which premiered on May 27, 1961. Apart from the main cast, Berry Kroeger played Mandible, Richard Collier as Otto, Alex Sharp as Blackmer, and Ted Knight as Halloran.

Read Elizabeth, My Love‘s plotline, or watch the full episode below.

Watch the Full Episode of Elizabeth, My Love

Watch the Full Episode of Elizabeth, My Love:

The Cartwrights, especially Ben, keep vigil over his son Adam suffering from a high fever. He sits up by Adam’s bedside, recalling his times with his first wife and Adam’s mother, Elizabeth. Ben also reminisces his time as a sailor serving under Elizabeth’s father, Captain Abel Morgan Stoddard.

After dinner with Captain Stoddard and Elizabeth, Ben and Elizabeth enjoy the sunset outside. Ben gives Elizabeth a present, expressing his love for the latter.

When they return, they find Stoddard talking to Halloran. The stockholders have voted to retire Captain Stoddard, much to their anguish. Ben tried to convince Halloran to retreat from their decision, saying no one would replace Captain Stoddard. However, the board has voted to turn the command to Ben.

The news frustrates Stoddard, so he drinks at the local pub. Ben finds him drunk, so he hits Stoddard back to his senses, encouraging him to regain his confidence.

Meanwhile, Elizabeth worries about his father, who knows nothing besides being a sailor. Ben and Elizabeth misunderstood the situation, so they called it off for a moment.

The following day, Ben and Elizabeth meet, apologizing for how they acted that night. Ben offers Stoddard a new opportunity: to be his business partner, specifically a ship’s chandler, in the West. Elizabeth encourages his father to accept the offer, as this is for the best. Although reluctant at first, Stoddard agrees to be a shopkeeper, including approving the two’s marriage.

Later that night, Mandible offers Stoddard a chance to buy a share of a ship. Stoddard refuses, with no intentions of associating with Mandible and his business. After the taunting remarks of the people in the town bar, the drunk Stoddard asks Mandible for a ship for himself. He then talks to Ben to get his money back, which Ben refuses, considering he’s drunk.

Stoddard goes to the shop to get money from Ben without his permission. However, Otto saw him. Ben insists on knowing the reason why Stoddard got his money back. Stoddard tells him he’s doing it to return to the sea, tired of seeing people laughing at him for being a shopkeeper. Elizabeth overhears their conversation and collapses due to stress.

Elizabeth needs to rest, as she’ll be in labor soon.

Meanwhile, Stoddard visits Mandible to tell him he won’t command any ship for him. However, Mandible presents him with a paper saying he has owned the captain for six months. Stoddard refuses, but there’s nothing he can do against Mandible.

Ben is reading a book and enjoying his time with Elizabeth, who’s bedridden. After reading a passage, Elizabeth tells Ben their son’s name will be Adam.

Later, Otto tells Stoddard that Mandible presented him with a paper stating his right of ownership to the shop. Together with Ben, they head to the shop, where they find Mandible by the office. Mandible tells them that Stoddard signed a paper stating his right of ownership and the breach of contract when Stoddard refused to command his ship. After a brief scuffle with Blackmer, Mandible agrees to forget their contract when Ben returns his money the next day. At the same time, Otto arrives to announce the coming of Ben and Elizabeth’s baby.

As expected, the baby was a boy. Elizabeth asks Ben to play the music box and hold her hand. She also asks him to promise her to go after his dream. Elizabeth then asks Ben to read her favorite passage. Before Ben can finish the reading, Elizabeth reaches for her music box and then dies as she closes it.

As promised, Ben leaves to go to the West with Adam. He bids his farewell to Stoddard and Otto, who support his ventures even from afar.

At that moment, Adam wakes up, seeing his father beside him. Adam tells Ben about his dream of being on a clipper ship, reminiscent of Ben’s stories when he was young. Hoss and Little Joe enter the room, happy to see their brother return.

Full Script and Dialogue of Elizabeth, My Love

Behind the Scenes of Elizabeth, My Love

The exterior street scenes in the episode were from Paramount Studios’ “New England Street.” Ben and Captain Stoddard first appeared in Stage 17. In this scene, rear-projected footage of the sea appeared behind the clipper ship mock-up. During Ben and Elizabeth’s conversation on Stage 16, the New England sea is matted behind them and optically printed using matte photography. Moreover, this episode also features backdrops of the New England waterfront, which appears in various scenes throughout the story. Different stock clips of the clipper ship from Paramount’s film library made it into the final cut.

Geraldine Brooks plays Hoss Cartwright’s bride-to-be in the episode “To Bloom for Thee” six seasons later in the show.

During the prologue, Ben looks at a photograph of Adam’s mother, Elizabeth, triggering a flashback to his marriage to Elizabeth and Adam’s birth. However, Elizabeth’s death happened just hours after giving birth to Adam in 1830, a time when high-quality photographs were possible.

The Western television show Bonanza, which depicts the adventures of the fictional Cartwright family, is an excellent series to watch alone or with your loved ones. From September 1959 to January 1973, the NBC network aired all 14 seasons on their channel. Elizabeth, My Love is the 65th episode out of 430 and the thirty-third for the program’s second season.