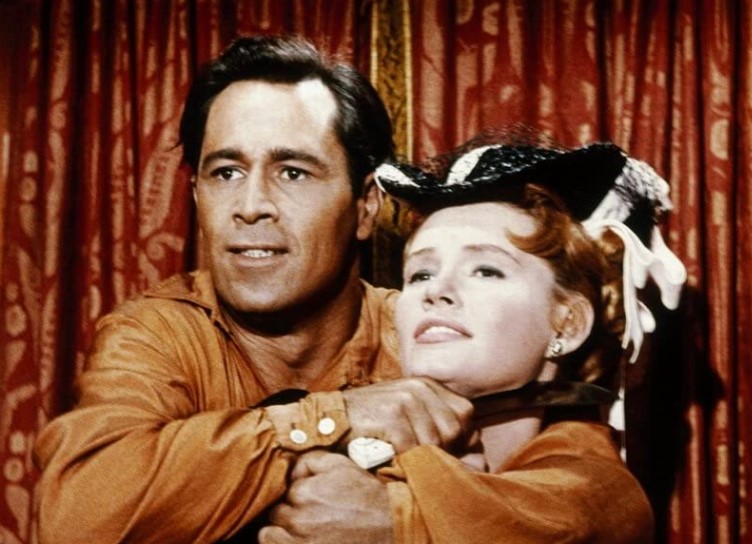 The legendary Western show Bonanza kept its viewers tuned in weekly through its action-packed stories mixed with great morals and occasional laughter. Herman Groves wrote the program’s fortieth episode, The Abduction, which made its television debut on October 29, 1960.

Joe and Hoss Cartwright find themselves in a perplexing mystery while attending a garish carnival with their girlfriends when Joe’s sweetheart (Jackie Russell) mysteriously vanishes. Determined to find her girl and unravel the secret behind her disappearance, Joe enters the strange and secret world of the “carnies.” Displeased with his intrusion, this group of people stops at nothing to block his way.

Gerald Mohr appears as the evil owner of the carnival, and Theo Marcuse, a dependable TV series actor, joins the cast.

Read the storyline and the episode’s interesting trivia, or watch it below.

Watch the Full Episode of The Abduction

Watch the Full Episode of The Abduction:

The Abduction, Bonanza’s eighth episode for its second season, stars a few of the show’s special guests, recurring and supporting actors in addition to the lead cast.

Full Story Line for The Abduction

Hoss and Joe take their beloved ladies to a colorful carnival to enjoy the day.

At one point, Jennifer Beale, Joe’s girlfriend, caught one of the carnival workers’ attention. The carnival owner, Phil Reed, recognized her as Joshua Beale’s daughter. He tells Gerner, the mentioned employee, that he can only dream of her.

Jennifer volunteers at Roudin the Mystic’s magical show, thinking it will be a fun experience. Backstage, she meets Phil and develops an interest in him. Phil’s sweetheart, Della Thompson, could only watch their conversation from across the room.

Later, Hoss, Joe, and the two ladies attend another show. However, while the three are enjoying the act, Jennifer disappears from her seat. Phil finds Jennifer roaming around the carnival, looking for him. He invites Jennifer to his wagon. Della sees them and goes back to her tent, upset.

Gerner tells Phil about his plan to abduct Jennifer for one million dollars from Joshua Beale, the wealthiest man in Comstock. He encourages Phil to help him, guaranteeing that her father will pay the ransom to ensure her safe return. The initially hesitant Phil agrees, so they tie and hide Jennifer in Reed’s quarters.

Joe meets Della upon searching for Jennifer. He tells her that one of the reasons why someone might take her is that she’s the daughter of the wealthiest man in Comstock. Della offers to find Jennifer for Joe. Upon leaving, several carnival workers enter, beating Joe under Gerner’s orders.

Suspicious of her lover and envious of Jennifer, Della confronts Phil about her whereabouts. Phil initially denies her hunch but later reveals he has Jennifer after Della brought up knowing about Jennifer’s father and their motive for holding her hostage.

Della informs Joe about her suspicions about Jennifer’s disappearance. Before she can say more about the situation, Gerner discreetly shoots her in the back using Joe’s gun, leading to her death. The gunshot draws the attention of Hoss and the carnival people, who accuse Joe of killing Della.

Reed summons sheriff Brady to the scene, and Joe explains that Della died because she was helping him find Jennifer. Brady believes Jennifer’s disappearance was no different from the ones he had before. However, determined to find her lover, Joe flees from the scene, and the party organizes a search to capture Joe for the murder of Della.

Joe travels deep into the carnival’s bowels to find Jennifer. They encounter intense resistance from the carnival people, who devise various ways to stop them from finding even a trace of her. Joe’s hiding leads him to Reed’s quarter. However, Gerner piled several pieces of clothing on Jennifer, causing Joe to fail to find her.

Roudin, Hercules, and Hoss meet up outside of town. However, out of rage, Hercules attacks Joe, and all three stop him. Roudin tells him that Joe didn’t kill Joe, implying that someone else killed her. He reminds Hercules how Phil often makes Della upset, and Reed is the key to finding the truth.

Together, the four turn the tables on Reed and Gerner. Phil reveals that Gerner killed Della, including Gerner’s idea of kidnapping Jennifer for the ransom money. Gerner throws a knife at Phil, which kills him later. Roudin talks to Daisy to reveal where Jennifer is, but Gerner threatens her with a knife from behind. Joe attacks Gerner, and Roudin tells Daisy about Phil’s death.

With Phil dead, Roudin manages the carnival, and Hoss and Joe wish him the best of luck.

Full Script and Dialogue of The Abduction

Behind the Scenes of The Abduction

The Bearded Lady puts her arms around Little Joe in one scene. The audience will find her hands behind Joe’s back when the camera focuses on her. However, her hands are on Joe’s chest when the camera shifts its focus to Joe.

“Hercules” hands the iron bar to the announcer after bending it. The iron bar given to Hoss for demonstration differs from what Hercules had. Apart from its color, the difference also lies in its angle.

When the knife thrower, Gerner, is ready to silence Daisy if she reveals any information, he holds his knife out of the tent, enough for everyone to see.

Joe emerges from the tent without a bruise on his pretty face even after being beaten up by four men.

Bonanza, which features the tales of Ben Cartwright and his sons, is a fantastic show to watch alone or with your beloved ones. All 14 seasons and over 400 episodes of the program ran on NBC from September 1959 to January 1973. The Abduction is the 40th episode out of 430 and the eighth for the second season.