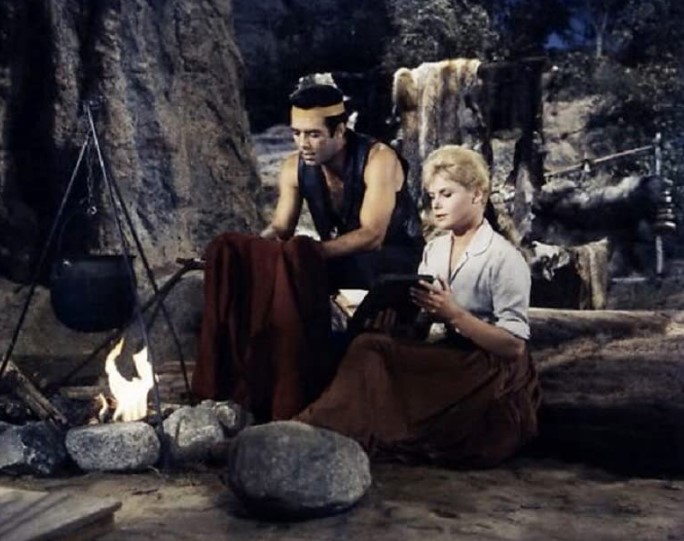 Bonanza was one of the longest-running Western television programs that millions of people loved watching during its prime. Due to its popularity, the mighty adventures of the fictional Cartwright family continue for 14 seasons. Cowritten by Joe Stone and Paul King, The Savage, the second season’s twelfth episode, initially aired on December 3, 1960.

Adam Cartwright sees the dead bodies of two white trappers who dared to endeavor a Shoshone burial ground. Despite the apparent violation made by the trappers, Chief Chato (Hal Jon Norman) refused to scalp the dead bodies, as their priority was to find the “White Buffalo Lady.”

Later, Adam rescues a white Shoshone captive long thought to be a “spirit” woman because of her capability to heal the ill.

Read The Savage‘s plotline, including some interesting trivia, or see the full episode below.

Watch the Full Episode of The Savage

Watch the Full Episode of The Savage:

Aside from Bonanza’s main cast, the second season’s twelfth episode, The Savage, also featured some of the series’ recurring and one-time guest members. The cast includes the following:

Full Story Line for The Savage

Despite seeing the lances set by the Indians as a warning, two white trappers continued venturing into a sacred burial ground. Arrows fly to each trapper as they cross the place, instantly killing them. Chief Chato refused to scalp the trappers, reminding his sons that they arrived not to take scalps but to find the spirit of the so-called “White Buffalo Woman.” He orders one of his sons, Dako, to go beyond the Forbidden Stone, and Tolka volunteers to join his brother.

At the Ponderosa, Ben and Adam argue about Adam wanting to see Ira Fairbanks’ windmills, hoping to develop the same framework to get the water up on the north section of the ranch. Ben believes there’s no need to do so, as they know nothing about Ira Fairbanks, and Adam going for a short trip to Nevada City will leave them short-handed. However, after seeing Adam’s frustration, Ben allows Adam to go as soon as he returns as soon as he can.

En route to Nevada City, Adam reaches the area where the Indians set the lances and finds the dead bodies of the trappers. He suddenly heard a voice from a distance, then followed to see the alleged “spirit woman.” Dako asks her for medicine, stating that people in their village are dying in their lodges. However, the woman declared that she could not do anything for them. Dako insists she helps them, then grabs her arm to stop her from leaving. By then, Dako realized she was not a spirit as they thought, but a white squaw whose presence at the burial ground brings shame and desecration. Dako is about to kill her when Adam interferes, but Tolka shoots him with an arrow, and Adam falls from the mountain. The woman approaches the injured Adam and introduces herself as the White Buffalo Woman. She tends to his wounds and removes the arrow stuck on his leg.

Adam wakes up at the White Buffalo Woman’s camp. There Adam finds a book that reveals the lady’s name as Ruth Halversen. Ruth stops him from reading further, reminding Adam that he’s there because he helped her. Adam can stay until he feels better, but Ruth warns him to keep away from her.

Although displeased, Ruth starts to answer Adam’s questions about her. She revealed that his father never returned after leaving the wagon. A Bannock hunting party found her by springtime and took her to their village. However, white hunters attacked them, killing those that refused to oblige. Ruth fled to the Mountain of the Dead (the sacred burial ground). That’s where a Shoshone found her, believing she was the White Buffalo Woman, a great spirit woman raised from the grave.

Chief Chato’s sons, Dako and Tolka, haven’t returned, so he believed they failed to fulfill their task. He goes to the Mountain of the Dead with a couple of men.

Meanwhile, Adam’s horse returned to the Ponderosa. Joe finds no marks on the horse, and Hoss believes no one has ridden it for a while. Ben tried to shrug it off, assuming the horse went down for water. However, after a moment, they set out to search for Adam.

Chief Chato orders Tiowa and Kaska to find the White Buffalo Woman’s camp. Adam encourages Ruth to return with him to where she belongs, telling her that the mountain will never be her home since she’s living there alone. However, Ruth continues to refuse. Ruth reveals that when two men caught and tried to hurt her, she got her hand on a knife and wounded the man’s face, so she ran to hide. Adam reassures her that she can forget about it, and the two share a kiss. Chief Chato suddenly arrives with his men, offering a tribute to the Great White Buffalo Woman. He requests for her to join them back to their village to cure the sickness of his people, but Ruth refuses, stating she must remain at the mountain with the ashes of the past. Chief Chato and his men leave with a plan in mind.

Meanwhile, Ben, Hoss, and Little Joe arrive at the mountain, where they find the bodies of the trappers. They believe Adam did not die but have no choice other than to go further.

Adam gives Ruth a ring, proposing to her. Ruth accepts to be her wife, then excuses herself for a moment to get something. However, once Adam was alone, two Shoshones arrived, forcing him to join them back to Chief Chato. Adam tried to fight his way out, killing one of them in a fight, but eventually had no choice but to join the other. Ruth returns and finds the Shoshone’s body, worried about Adam.

Chief Chato held Adam hostage—a part of his plan to force the White Buffalo Woman to come to their village willingly. Adam argues that they took the wrong bait. However, Ruth arrives, ordering Chief Chato to release Adam, or they will die. Chief Chato insists they return with her. Ruth offers a deal: they spare Adam’s life, and she’ll heal their people. Chief Chato accepts her offer, but Adam opposes, causing the Shoshone men to strike him. Seeing she has no choice, Ruth tells Chief Chato that she’s ready to join them. Chief Chato orders his men to take Adam to Ruth’s camp, where he’ll find his way back.

The Cartwrights find Adam at the camp, severely injured. Adam wakes and tells them that the Shoshone took the woman who saved his life. Joe gets the Bible, and they find the ring Adam gave her. Adam realized that Ruth willingly joined the Shoshone to save his life. This realization further fueled Adam’s determination to go after her. However, Ben thinks it’s time for him to let her go, assuring Adam that they’ll meet again someday.

Full Script and Dialogue of The Savage

Behind the Scenes of The Savage

Bonanza is an American Western television program worth watching alone or with family. Due to its popularity, the show lasted 14 seasons, with the NBC network airing it from September 1959 to January 1973. The Savage is the 44th episode out of 430 and the twelfth for the second season.