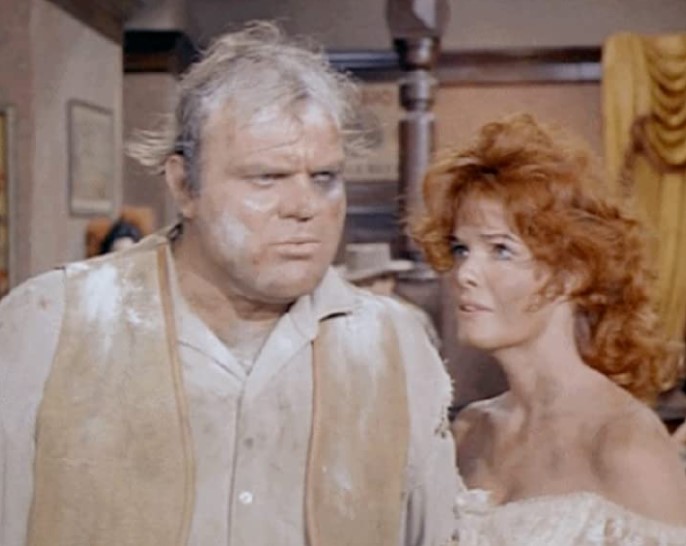 Millions of Americans tuned in to watch Bonanza, one of NBC’s Western television shows, from 1959 to 1973. Ward Hawkins wrote The Infernal Machine, which debuted on television on April 22, 1961. Additionally, Republic Studios stalwart William Witney directed the episode.

Hoss Cartwright’s friend Daniel Pettibone (Eddie Ryder) invented a horseless carriage called “The Infernal Machine.” When Hoss tries to get funding for Dan’s invention, everyone except a city slicker named Throckmorton (Willard Waterman) turns him down. The townspeople began to follow suit after hearing the slick stranger investing money in the carriage. However, in the end, Throckmorton flees town with the cash, leaving Hoss and Daniel holding the bag.

Read The Infernal Machine‘s plot, including some interesting trivia, or watch the full episode below.

Watch the Full Episode of The Infernal Machine

Watch the Full Episode of The Infernal Machine:

Hoss returns to the Ponderosa with a machine, along with his new-found friend, Daniel Pettibone, and his wife, Robin. Hoss introduces Dan as an inventor, presenting one of his inventions: a mini-horseless carriage.

Robin speaks for his husband, who has trouble talking to strangers because of his profession and inventions. She explains that the carriage moves through an internal combustion engine, a principle her husband improved for modern use. Joe thinks it’s too little, so Hoss tells him it’s a model for something big enough for people to ride.

Hoss assists his “partners” in their room. Once he returns to the living room, Ben and Joe doubt Hoss’s choices. Ben thinks the wagon is impractical as it cannot go for long travels or haul freight. However, Hoss insists on believing in the wagon’s usefulness. Still, Ben and Joe couldn’t have faith in the invention. Regardless, Hoss is determined to go to Virginia City with Daniel to seek funding to build a full-size horseless carriage. Before he leaves, Ben invests $100 while Joe puts in $50. Hoss hesitates to accept, but Ben explains they have faith in Hoss.

Hoss and Dan demonstrate the model of the horseless wagon to the people in Virginia City. Most people were skeptical, especially since Dan couldn’t talk for himself. However, a mysterious man suddenly invested $1000 in the Pettibone Power Wagon Company, introducing himself as Cyrus K. Throckmorton and his associate, Mr. Peter Long. He is a broker and investment counselor known in New York, London, and Paris. Throckmorton arrived in Virginia City to invest funds for Eastern capital. Apart from investing, he offers a guiding hand to Hoss and Dan after learning Dan doesn’t have any financial manager. His smooth talking impressed Hoss and Dan, who excitedly took his offer.

Throckmorton invites Big Red, a saloon girl, into their hotel room to offer her a job as a private secretary, which she immediately accepts.

With Throckmorton’s smooth sales talk, the locals begin to invest their shares. Meanwhile, Red and Pete announce they’re getting married.

As Dan, Robin, and Hoss take a picture with the wagon, Red enters, looking for his soon-to-be-groom, who’s missing. Red found Pete and Throckmorton gone from their room with their stuff, including the money the locals invested for Dan’s invention.

The sheriff organized a posse to look for Pete and Throckmorton all over the country. Meanwhile, Hoss tells Dan he has to be in jail in the meantime to protect himself from the angered townspeople.

Red received a letter from Pete, asking her to sneak out of town and meet him close to Burton Falls at old Perkins place. Hoss allowed her to join him as he pursued the two, only if she dropped the rifle she was holding.

Hoss and Red arrive at the place where Pete and Throckmorton are staying. Throckmorton throws the dough he kneads to stop Hoss from firing his gun. Hoss still managed to shoot, spreading flour all over the place. Hoss and Pete fight, while Red and Throckmorton fight for the money’s briefcase. The stone lids exploding stopped their scuffle for a moment, but they continued right after.

Although holding a gun, Throckmorton failed to shoot his friend. Hoss couldn’t understand how Throckmorton chose to steal the money instead of staying with the Pettibone Power Wagon Company. All Throckmorton can say is that he’s dishonest.

Red and Hoss return to the town pub with the money they stole. They expected the townspeople to be happy, but everyone was downhearted. Oglesby tells Hoss that the pressure from the town may have caused Dan’s heart to fail, causing his death. Hoss believes Dan didn’t die of fright. Still, it was sad news for everybody. The people in town who invested in the company chose to give the money to Robin. On the other hand, Throckmorton encourages Pete to continue the marriage, delighting both Pete and Red.

Full Script and Dialogue of The Infernal Machine

Behind the Scenes of The Infernal Machine

Germans invented guns that could shoot around corners during World War II. However, they did not serve their purpose that well.

The view from the bar shows the painting of the other side of the street. At one point, the actors’ shadows can be visible.

Make Bonanza your next series to watch yourself or with the people you love! It’s a fantastic 14-season show run by the NBC network from September 1959 to January 1973. The Infernal Machine is the 61st episode out of 430 and the twenty-ninth for its second season.