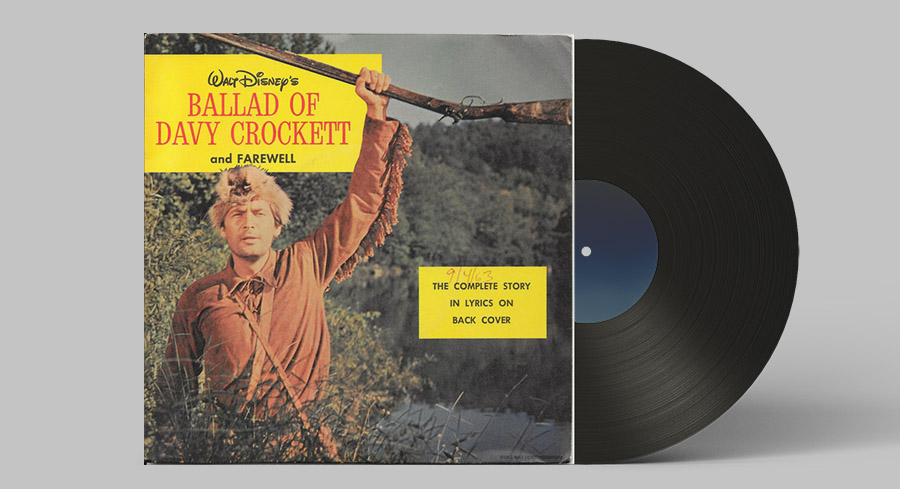 The members of The Western Writers of America chose the Ballad of Davy Crockett as one of the Top 100 Western Songs of all time. The song’s music is by George Bruns, while the lyrics are by Thomas W. Blackburn. On October 27, 1954, the song was introduced in the premiere episode of the ABC television series Disneyland.

American film and television actor Fess Parker is shown performing the song on a log cabin set in frontiersman clothes, accompanied by similarly dressed musicians. The version of the song sang by The Wellingtons was later heard throughout the Disneyland television miniseries Davy Crockett, first aired on December 15, 1954. Parker played the role of Davy Crockett in the miniseries and went on to four other episodes produced by Walt Disney Studios. Together with Parker, Buddy Ebsen starred as George “Georgie” Russel, while Jeff York played legendary boatman Mike Fink.

The president of Cadence Records, Archie Bleyer, heard the song on ABC television (December 15, 1954) and called Bill Hayes that night to assess his interest in recording it. The next day, the song was recorded by Hayes (vocals), Al Caiola (guitar), and Art Ryerson (guitar) in just one take at an RCA studio in Manhattan.

Various artists recorded their versions of the song. Some notable covers are from:

Here is the list of some albums where the song has been included in the tracklist:

Previous Post
Why Did John Hart Play The Lone Ranger? The Shocking Truth
Next Post
What Gun Did Billy The Kid Use? Check It Out