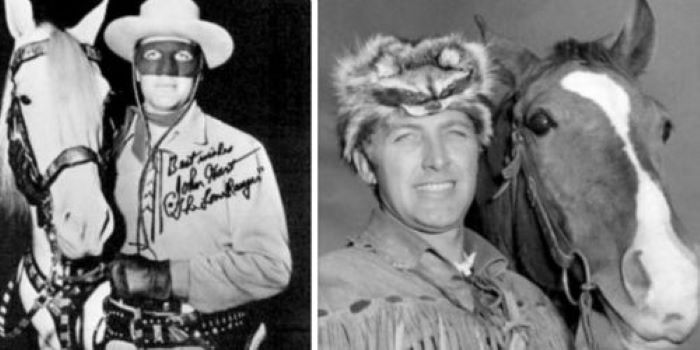 Why Did John Hart Play The Lone Ranger? The Shocking Truth

If you’ve watched the Western TV Series The Lone Ranger, you know that Clayton Moore is known to play the character. But why did John Hart also play as the Lone Ranger?

Many actors played the role of the Lone Ranger in the radio and TV series. However, names like Clayton Moore and John Hart were more popular.

Clayton Moore, in particular, comes to mind whenever people mentioned the name “Lone Ranger.” Hence, it was surprising to find John Hart in the picture.

Why did John Hart play the Lone Ranger?

Well, John Hart played the Lone Ranger primarily because the producers had no choice but to replace Clayton Moore, who previously held the role.

The producers assumed that the show’s success depends on the masked hero and not the person behind the mask. So after firing Clayton Moore, they hired John Hart to play the role.

Hart had a similar built and related Western background as Moore. He was also very good at horse riding and has worked as a cowboy during the summer as a young boy.

Unfortunately, the producers got unexpected responses to their decision. The public didn’t accept John Hart as the Lone Ranger. Such feedback forced them to bring back Moore and fulfill his demands.

In Clayton Moore’s autobiography, “I Was That Masked Man,” he didn’t know why the producers replaced him. He also pointed out that he didn’t ask for a pay raise.

It’s important to note that Hart didn’t play the Lone Ranger role out of the blue. He had previous minor roles in two episodes of the show. They include the 34th episode, “Rifles and Renegades,” and the 46th, “Sheriff at Gunstock.”

Hence, there was no known reason why John Hart replaced Moore.

Who Is John Hart In The Lone Ranger?

John Hart starred in “Jack Armstrong: The All-American Boy,” a must-watch 1940 TV series. He also starred in the 1950s television show “Hawkeye and the Last of the Mohicans.”

John Hart started his career in 1937. His first role was in “Daughter of Shanghai” and then featured in “Prison Farm” and “King of Alcatraz.” In 1938, he was in “The Buccaneer” and in 1940, “Northwest Mounted Police.”

However, his career came to a halt in 1941, as he had to join the US army during the war. While in the military, he was in the Coast Artillery and rose to the rank of First Sergeant. Then, he served in the Philippines.

After his military service, Hart got the lead role in the Jack Armstrong serial in 1947, proving that he often worked for Sam Katzman. He also got parts in many Westerns.

In the early days of his career, he took on mainly minor roles in some famous films. However, he’s well known as “the other Lone Ranger,” replacing Clayton Moore in The Lone Ranger TV series. He played the lone ranger in only the third season of the show in 1952.

As time went by, he got a better role in Hawkeye and the Last of the Monicans in 1957, where he portrayed Nat “Hawkeye” Cutler.

The program had only one season, based partly on James Fenimore Cooper’s novels. He met his wife, actress Beryl Braithwaite, during the filming in Canada. They got married ten days later and were together till his death.

In 1962, he was in Mister Magoo’s Christmas Carol and voiced the Milkman and the Stage Manager. He appeared briefly twice in the TV series “Perry Mason” in 1965.

Hart continued his career for more than two decades. He acted in movies of various genres, but mainly in supporting roles. His last movie appearances include “The Legend of the Lone Ranger” (1981), where he played Lucas Striker, the newspaper editor.

Another film he acted in is “Happy Days as The Lone Ranger.” In the TV series, he repeated his role as the Lone Ranger in “Hi-Yo Fonzie Away” in 1982. It’s an episode in which Fonzie (Henry Winkler) meets the Lone Ranger, his childhood hero, for his birthday.

Part of his last appearances is in an episode in another TV show, The Greatest American Hero, “My Heroes Have Always Been Cowboys.” He talked to the title character inspiring him about heroism.

John Hart died in 2009 at 91, after suffering from dementia for several years.

Who Did John Hart Replace In The Lone Ranger?

John Hart replaced Clayton Moore as the Lone Ranger. Moore was born and brought up in Chicago, Illinois, in 1914. He was the last of three sons of the Moore family. He was passionate about gymnastics while growing up and even became a circus acrobat when he was 8.

At 19, Moore joined a trapeze act. He performed at the 1934 Chicago World’s Fair. Due to his good looks, Moore also worked as a model in John Robert Powers Modeling Agency.

In 1938, he moved to Hollywood and worked as a stuntman and bit player. In 1940, he adopted his stage name, “Clayton,” in place of “Jack.” Eventually, he became the leading actor in several serials at Republic Studios. He was also in many B Westerns.

Moore joined the Military during World War II in 1942. He was in charge of entertainment duties and the making of training films.

When the war was over, he went back to his acting career and concentrated on Westerns. His role as “Ghost of Zorro” in 1949 drew George Trendle’s attention (Lone Ranger’s producer), so he chose him to play the Lone Ranger role.

Moore had a natural baritone voice, so he had to work with a voice coach to mimic the voice and speech pattern of the radio actor, Brace Beemer. He played the character for the TV series from 1949 to 1952 and from 1953 to 1957.

He became famous and well known as the Lone Ranger. However, John Hart replaced him for one season because of a salary dispute.

During his time away from The Lone Ranger series, he continued his movie career. He starred in “Radar Men from the Moon” in 1952 and “Jungle Drums of Africa” in 1953.

However, in 1978, Jack Wrather got a court order to stop Moore from appearing as the Lone Ranger in public. That was because Wrather had the rights and ownership to the title character.

The Wrather Corporation was on the verge of making a new version of the film. Their opinion was that Moore’s appearances might affect the public opinion of the new star.

Clayton Moore responded to Wrather’s Court order by filing a countersuit and changed his mask to a pair of Foster Grant sunglasses. However, Wrather’s film (The Legend of the Lone Ranger, 1981) performed poorly.

The legal proceedings dragged on till 1984 when Wrather dropped the lawsuit to stop Moore from appearing as the Lone Ranger in public. However, Wrather died of cancer two months after that.

Moore remained inseparable from the Lone Ranger character. In 1982, he got inducted into the Stuntmen’s Hall of Fame and the Western Performers Hall of Fame in 1990.

Clayton Moore suffered a heart attack and died in 1999.

During the early days of the show, Fran Striker wrote most of the radio scripts. He came up with the famous catchphrase “Hi-yo, silver, away!” He also came up with the character of Tonto. Consequently, he wrote movie serials and comic book texts.

George Steinus was the first actor for the radio show. The next was Jack Deeds, who did just one performance. James Jewell was a station director but also played the role once. For a long time (1933 to 1941), Earle Graser played the character before Brace Beemer (1941 to 1954).

Victor Daniels (Chief Thundercloud) played Tonto during the film serials, and the actors that played the masked hero remained hidden. The actors were Lee Powell, Hal Taliaferro, Lane Chandler, George Letz, and Herman Brix. It was an attempt to create suspense for the final installment.

The show was most successful when Clayton Moore was the Lone Ranger, and Jay Silverheels was Tonto. Hence, it was easy to rehire Moore for the role following the outcry of the viewers.

In 1954, WXYZ station (owned by George W. Trendle) sold the rights to the Lone Ranger character to Wrather Corporation for $3 million. The radio series stopped that same period. However, the television series continued until 1957, with Jack Wrather as the new producer.

Why did John Hart also play as The Lone Ranger?

John Hart played the Lone Ranger as a replacement for Clayton Moore. Since the producers fired Moore, it’s only natural that he gets replaced.

Apart from John Hart and Clayton Moore, several other actors played the role of the Lone Ranger for the radio and film serials. However, the two actors, Moore and Hart, played the character for the television series.


Did you enjoy reading Why Did John Hart Play The Lone Ranger? If you are looking for other great western books, check out these authors.

Previous Post
Who Is The Lone Ranger Based On? A Must-Read
Next Post
Western Song: Ballad of Davy Crockett