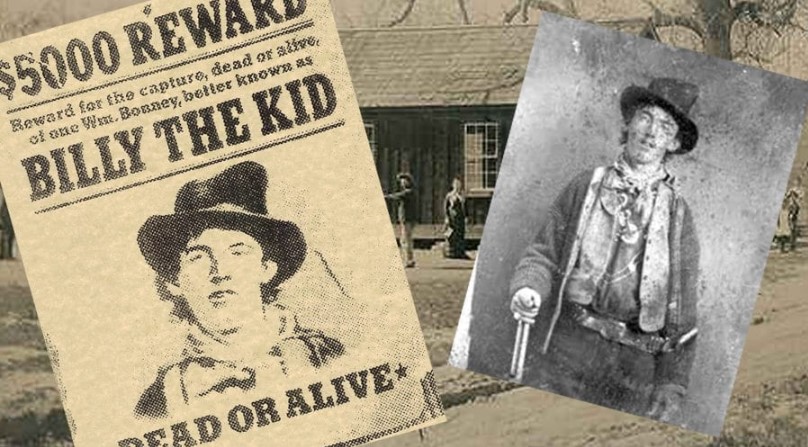 What Gun Did Billy The Kid Use? Check It Out

Billy the Kid remains a Wild West legend famous for his sharpshooting skills. You’ll find out in this article the gun that Billy the Kid used.

In the old West, it wasn’t uncommon to find outlaws, officers, and gunslingers. Also, it wasn’t surprising to discover young children who were outlaws and infamous gunslingers in their teenage years. Many of these teenagers have made history and had versions of their stories made into films and books.

Billy the Kid was one of those infamous gunslinging-teenage outlaws from the old West. He reached legendary status with his story told and retold in different ways.

You’ll find many legends and myths about this young man who died at 21, after leaving several people dead with his legendary guns.

What Gun Did Billy the Kid Use?

Billy the Kid often used the Thunderer, which is a Colt Single Action. 44. However, his favorite gun was the Winchester ’73 Rifle. He supposedly used both guns interchangeably.

The Early Life Of Billy The Kid

There is hardly any verified information about the early stages of Billy the Kid’s life. The Western gunslinger and outlaw, Billy the Kid, was supposedly born in a rural Irish neighborhood on the east side of New York City. History shows that he possibly came into existence on the 23rd of November 1859.

Billy the Kid was born Henry McCarthy, but he changed his name to William H. Bonney. Nobody knows for a fact why he had a name change. The speculations are that he changed it because he was trying to hide from his crimes.

The “William” in his new name was from his mother’s partner, who was like a father to him, William Antrin, while “Bonney” was his mother’s maiden name. The Kid’s biological father wasn’t present in his life.

In 1865, Billy the Kid and his family traveled West and ended up in Wichita in 1870. After a while, they moved further West, and by 1973, Billy’s mother Catherine got married to her partner of many years, Antrin. Unfortunately, the family was thrown into grief when Catherine died of lung cancer in 1874. After a while, Billy the Kid left his brothers and stepfather, venturing on his own.

Billy The Kid’s Involvement In The Lincoln County War

After he left his family, he went into New Mexico and started working as a ranch hand. According to the many legends about Billy the Kid, he made his first kill in the Guadalupe mountains after leaving his family. He killed a group of Apache Indians, and he didn’t waste time before killing another person, a blacksmith.

The nickname “Billy the Kid” was what many called him at that time.

After a while, he got a job as a bodyguard to John Tusall, a businessman and rancher. John Tusall did his business in Lincoln, New Mexico. Billy the Kid worked with Tusall until a rival cattle gang murdered him in 1878. This death marked the beginning of the Lincoln County War made famous by Billy the Kid’s involvement.

Billy the Kid wanted to avenge Tusall’s death so badly that he started and led a Posse called the regulators. Their primary aim was to find and “arrest” Tusall’s killers. It is impossible to know if they believed they could arrest the killers, although they didn’t. Instead, they murdered two of the killers, and as expected, this act intensified the already brewing tension.

On a particular day, the rival gang managed to ambush Billy and the regulators in a house in the outskirts of town. Billy the Kid and his people refused to surrender, even though the rival gang surrounded them. It was a whole affair, with a squadron of the United States Army stationed outside the house. This situation went on for five days, with Billy and his crew refusing to surrender.

After five days went by, Billy and his crew made an unexpected attempt to escape. Their attempt was successful because the group waiting outside wasn’t expecting them to shoot their way out boldly. Billy the Kid fled with his regulators, and they left town.

He successfully evaded arrest for two years. Someone he had previously been cordial with, Lincoln Sheriff Pat Garrett, finally arrested him. The two knew each other before Garrett became a lawman.

Billy the Kid faced charges for the murder of Lincoln Sheriff Brady, and they sentenced him to death by hanging. As usual, Billy wasn’t going to go down without a fight. Hence, two weeks before his sentencing, he did what most people on death row might have thought twice before doing. The Kid fought a jailer, overpowered him, took his gun, and killed him and one other person in his bid to escape.

He escaped jail and made headlines for a long time. People who didn’t know him from the Lincoln County War knew him after the jailbreak. He was the topic of discussion in many homes and news outlets.

The general story of how Billy the Kid died was that Lincoln Sheriff Pat Garrett killed him. However, there are so many other stories about how he died.

There were stories of how he died at 21, a few minutes past midnight on the 14th of July 1881. Sheriff Pat Garrett shot Billy at Pete Maxwell’s home. The two men were armed, but Sheriff Pat fired his gun first. This account is a widely known fact.

Over the years, many theories about the death of Billy the Kid have come up. Some people say Sheriff Garrett shot the wrong person, and Billy the Kid escaped. It hasn’t helped much that different people have come upon separate occasions to suggest that they were Billy the Kid.

The biography of Billy the Kid written by Pat Garrett, Billy’s killer, gave one of the most credible and detailed accounts of what happened the night Billy got shot.

According to Garrett, he stopped on his way to Pete Maxwell’s ranch with his two deputies. They stopped to have coffee with an acquaintance. While they were preparing to leave on foot, they heard voices speaking Spanish. They hid as a man with a hat walked past them. They didn’t know it at that time, but it was Billy the Kid going up to Pete’s to eat beef.

Sheriff Garrett decided to take the bull by the horn, leaving his deputies outside to sneak into the house. He found his way to Pete Maxwell’s bedroom, where Pete was in bed. He interrogated him, presumably at gunpoint, because Pete told him that Billy was in the ranch, but he didn’t know which part.

While the interrogation was ongoing in the darkroom, Billy the Kid came in with a gun and a knife.

Billy the Kid asked, “Who is there?” in Spanish.

Sheriff Garrett whispered to Pete, who was still on his bed, “Who is that?” and Pete responded, “That’s him.”

Billy the Kid raised his gun to fire when he realized that there was someone else in the room beside Pete, but it was too late. Garrett fired two shots. One hit Billy squarely on his chest.

Garret writes in his book that it was unlikely for Billy to hesitate before firing a shot. The next day, the coronary jury confirmed that the body was indeed Billy’s, and they put him in the ground almost immediately.

What You Need To Know About Billy The Kid

Here are a few things you should know about Billy:

He was first arrested for stealing clothes. This incident happened before he got the nickname Billy the Kid. It was also before he changed his name from Henry McCarthy to William H Bonney.

He assisted a guy called Sombrero Jack to rob a Chinese-owned laundry business. They caught him and charged him for stealing. He received a small sentence, but Billy the Kid chose to escape rather than serve his sentence. He fled through the jailhouse’s chimney and left town. It was after this incident that he started working as a rancher and later for Tall.

He never robbed a train or bank: It is almost difficult to find an outlaw in the old West who wasn’t a bandit or hadn’t attempted to steal from a bank or train. It was the source of livelihood for many outlaws.

Billy the Kid wasn’t a Bandit. He most likely stole a thing or two, but he never robbed a bank or train.

There are many movies and books about him: Billy the Kid was famous during his time. He was on the lips of many people in the old West for many of his actions. However, his popularity doubled and spread after his death when networks and individuals made movies and books about his life. Some of these films include The Outlaw, The Adventures of Billy, Young Guns, The Kid, and many more.

Billy the Kid was a legend during his time. Like many of the legendary outlaws from the old West, people were interested in everything concerning him.

This post answers the question “What gun did Billy the Kid use?” including other information on the life of Billy the Kid.