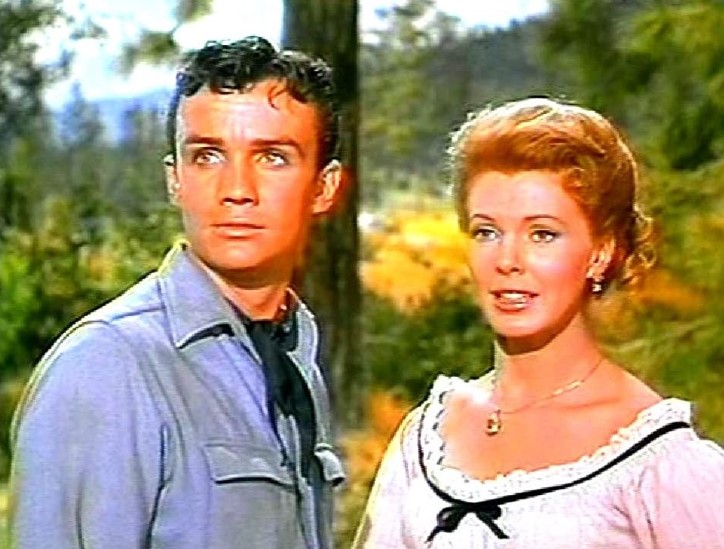 Fans continue to witness the daily adventures of the fictional Cartwright family as Bonanza, the hit Western television series, launched its second season on September 10, 1960, with its first episode, Showdown, written by Dean Riesner.

Sam Kirby (Ben Cooper) and his gang of outlaws hide out on the Ponderosa as they evade the law. Sam finds work as a ranchhand at the Ponderosa, disguising under a false name to keep track of the sheriff and any posse that may discover their hideout. Everyone on the ranch is happy to have the friendly stranger join them, except Joe Cartwright, who found Sam suspicious.

Ray Teal plays Sheriff Coffee for the first time in the series. Other actors, like Jack Lambert, acting as Pardo, and Jody Warner as Ellie, joined the cast.

Read the storyline and some interesting trivia, or watch the episode below.

Watch the Full Episode of Showdown

Watch the Full Episode of Showdown:

Showdown, the premiere episode of Bonanza’s second season, featured some of the program’s recurring and supporting cast members. The entire cast of the episode consists of:

John Pardo and his gang of outlaws rob the Virginia City bank. They later decided to hide in the Ponderosa, sending Sam Kirby to work as a ranch hand to be on a lookout if ever the town decided to form a search party or summon a platoon from the army.

Adam, Hoss, and Joe Cartwright are riding horses when Sam arrives at the Ponderosa ranch. Sam’s laughter draws the horses’ attention when one of the horses throws Joe. He asks for a job, but Joe claims he and his brothers are taking care of all the tasks in the Ponderosa. After successfully riding the horse that threw Joe and declaring a reference from a former Ponderosa hand, Adam offers him a position on the ranch, which he accepts immediately.

Sheriff Coffee arrives at the Ponderosa to notify the Cartwrights about the robbery at Mr. McClure’s bank.

Ben decided to start searching the area before it got dark. Joe informs him about their new hire, but Ben and Adam shrug it off since they believe their former ranch referred him.

To cover more ground, Ben sends the boys to different areas in the Ponderosa in pairs. When Sam realizes Hoss is heading towards the gang’s hideout, he volunteers to accompany him. Sam suggests returning, making an excuse that it’s getting late. However, Hoss finds some suspicious markings and starts examining further. Seeing his words not stopping Hoss from investigating, Sam tried to draw his gun. Joe shows up in time to stop him. Joe claims he saw Sam pulling his weapon, but Hoss doesn’t believe him. Meanwhile, Sam argued he only reached for his gun upon hearing somebody coming. They leave the area, and Joe starts to find Sam suspicious.

Ben reports to sheriff Roy regarding the areas they covered. Adam and Sam arrive shortly after, and the sheriff thinks Sam is familiar. He asked when the Cartwrights hired him and where he was during the night of the robbery, to which he replied that he was on the trail. The Cartwrights, except Joe, believe there’s nothing wrong with Sam. A telegraph arrives at that moment, stating that the army will come into town. Joe noticed the telegrapher’s doubtful look at Sam, so he went outside to ask. The telegrapher informs him that he might have seen Sam with two other men that night a gang robbed the bank. Although the telegrapher is unsure about what he saw, Joe becomes increasingly suspicious of Sam.

At the picnic party, Hoss introduces Sam to Ellie McClure, daughter of the bank’s owner. Sam becomes friendly with Ellie, helping her set up one of the picnic tables. Ellie expresses her dismay about the bank robbery and how her father feels responsible, even if it wasn’t his fault that some robbers stole the money. However, she’s happy to hear about the upcoming arrival of the army. Pleased to meet Sam, Ellie invites him to the Thursday dance.

Joe suddenly comes back, believing Sam’s getting Ellie from him. A fight erupts, and Sam’s shirt gets ripped at one point, exposing whip scars on Sam’s back. Feeling angry and humiliated, Sam insisted on leaving. Adam hands him his vest to cover his back. Ben, Hoss, and Adam want to know why Joe acted that way towards Sam. Joe reveals what the telegrapher, Rudy, told him about Sam, saying he won’t be surprised if Sam has a connection with the robbery. However, Ben believes it wasn’t enough evidence to conclude that. Joe feels bad and says he’ll apologize to Sam.

Sam returns to the gang’s hideout and reports about the army troop’s arrival and the posses’ location. Pardo noticed Sam’s vest and asked about it. He tells him that Adam gave it, and Pardo’s impressed, even amused, to see how the Cartwrights trusted Sam. Despite Sam’s objections, Pardo insists he returns to the Ponderosa.

Joe followed Sam’s trail, which eventually led him to their hideout. Two of the gang members brought him in, and there he saw Sam. When Sam is about to leave, Joe hits him, so Pardo punches him back, knocking him down. Pardo tried to hit Joe more, but Sam stopped him. Pardo thinks Sam’s going soft for the Cartwrights, then sends Sam back to find more about the army troops.

Adam asks about Joe upon hearing Sam’s arrival. Sam claims he hasn’t seen Joe, much to Adam’s surprise, since Joe left immediately after Sam to apologize. Hearing this makes Sam feel even worse. Adam considers him a friend, but Sam says a man’s sole friend is himself. Adam doesn’t argue and calmly informs Sam that the sheriff is inside to see him.

Sheriff Roy states he sent a telegram to the ranch hand in Arizona. Although they know Sam, the ranch fired him when they discovered he had a prison record in Texas. Sam admits to killing his stepfather in cold blood several years after his mother’s death. Growing up, his stepfather consistently beat and whipped him, causing scars on his back. Sam waited ’til he was big and strong enough to fight back, then served his time in prison. Ben thinks the sentence he faced was enough, but Roy wants to take Sam with him. He refuses to let Sam go with the sheriff, so Roy tells him he’s now responsible for Sam. Although Ben treats him kindly, even offering a home for him in the Ponderosa, Sam leaves and tells him not to expect any from him. Adam believes Sam’s not used to the kind of treatment Ben gave him.

Adam visits Sam in the bunk house that night. He sees Sam preparing to leave, wondering if their kindness and friendship overwhelmed Sam. Adam was about to reach for his vest when Sam knocked him out before leaving.

Ben finds Adam leaving the bunk house. They realize the sheriff and Joe were right about Sam the whole time.

Sam goes back to the gang. Pardo fails to get information from Joe, so he asks Sam to do it for him. Sam refused, so Pardo accused him of softening since he lived in the Ponderosa. Sam argues that Joe will never reveal the details, considering Joe’s a Cartwright. Pardo orders his men to kill Joe, but Sam persuades him to do otherwise. He says they’ll get away with Joe riding upfront, so he’ll die if the Cartwrights start shooting at them. The idea satisfied Pardo. When the men go to pack up, Sam aims his gun at Pardo’s head. A scuffle ensues, giving Joe the time to obtain a gun and shoot Pardo. At the end of the fight, Joe assures Sam that he has friends now.

The following morning, the Cartwrights are searching the area when they see Joe and Sam leading the gang toward them. There they realize that they misjudged Sam Kirby.

Full Script and Dialogue of Showdown

Behind the Scenes of Showdown

This episode is the first one with Sheriff Roy Coffee. It also marks Ray Teal’s first out of 88 appearances in the series.

Sheriff Roy Coffee gave the Cartwrights the written report on Sam Kirby’s past. Ben picks up the piece of paper, glances at it, crumples it, then throws it into the fire shortly after. He missed throwing the crumpled paper, leaving it in front of the fireplace and between Hoss and Adam. Ben gazes into the fire, pretending to watch the paper burn, then walks over to Hoss and Adam’s position. By that scene, the paper has disappeared.

Ben was laughing for a moment before quickly returning to his serious face during Sam and Joe’s fight scene at the picnic.

There were initially a series of law enforcement officials in Virginia City (one marshal, nine sheriffs, and three deputies) during its first season. For its second season, the show has settled on a permanent sheriff in the form of Ray Teal as Sheriff Roy Coffee. Meanwhile, law enforcers outside Virginia City in the first season included one Texas sheriff, a marshal from Los Angeles, and a police sergeant from San Francisco.

All 14 seasons of Bonanza are worth watching by yourself or with the family. The program ran under the NBC network’s production from September 1959 to January 1973. Showdown is the 31st episode out of 430 and the first for the second season.